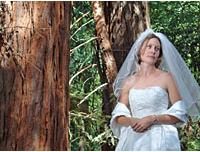 Goldie, I’m sorry — what can I say? It’s been two weeks since I e-mailed you and broke our date, but I got a sudden lighting job at a location shoot up on the North Coast. You know all those twisty roads through misty forests in the car commercials? That’s the North Coast. Ever try to light a redwood glade a mile from a power supply? Well, I’ll get to that shortly.

But first, like we say in Hollywood, the back story. The producer gets a call from this dot-com type who bailed before the crash so he’s loaded. He wants to marry off his daughter, sparing no expense and wants a wedding video: the whole schmeer. A regular wedding videographer is not expensive enough, so he wants my producer to do the job. I’m to fly up there to scout the location. So far, so good.

Turns out, the bride and groom have been sitting in a tree for a year to protest logging (Daddy’s cool with that because they were in different trees). Anyway, they’re on the ground again so they’ve booked — get ready for this — an entire state park to get hitched in, a park renowned for its amazing groves of Sequoia sempervirens — what the civilians call coast redwoods. They want the wedding outdoors, smack-dab in the middle of the biggest grove.

Daddy and the bride drive me up US 101 toward the park and it’s no wonder they shoot car commercials here. A forest of trees 200 feet high, with dramatic shafts of golden light slanting down like the sun through cathedral windows.

Excellent! Some hard reflectors on stands, a few water weights to hold them and we’re in business. Come to think of it, those shadows are mighty deep. Better plan on a couple banks of lights with daylight filters, for fill where reflectors don’t work.

Okay, inside the park we drive past the very nice lodge and I’m hoping this grove is pretty close to it because an extremely long power cable makes for voltage drops and that louses up your color temperature. (We did talk about color temperature, didn’t we, Goldie?)

We finally get to the grove: it would take your breath away. These trees are so old and big and silent. They just stand there patiently while 60 generations of unimportant humans come and go. The silence is so deep you want a bird or a little stream to make some noise. Nothing important grows beneath these ancient gods because their collective canopy is too dense to let in much light, so the forest floor is needles and soft duff.

Which is good because the guests, all 200 of them, will be sitting on it. The bride explains that everyone will be in hiking clothes so the lack of chairs won’t matter. Even the minister will be in boots and have a daypack. No chairs, no lectern, no bower and no artificial decorations, just the overwhelming cathedral of trees.

Whoa! Cathedral: what happened to those stained glass window sunshine effects we saw on US 101? Tom, you dummy: the highway divides the canopy so the light can get in. There’s no highway in this grove and the light level is maybe (I whip out my trusty incident meter) f1.4 at noon on a sunny day. Suddenly, I’m telling Daddy he’ll have to spring for a generator — maybe 50 amps — and twice as many lights because reflectors won’t cut it when there’s nothing to reflect.

No way, says the bride: no noisy, smelly, fossil fuel-burning, polluting resource-hogging generators. So I nod and smile and look at my meter again and pretend I know how to light a basketball court with no sun and no power. I am very silent on the way back to town.

You know me, Goldie: the tougher the problem, the better I like it. Hiding in my rustic rental cabin beside the RV park with a large pepperoni extra cheese, I start scheming. Bring up the e-mail attachments now: Figure1.jpg. Figure2.jpg and so on. 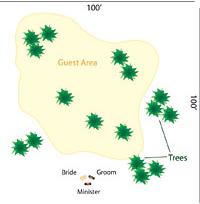 Figure 1 shows the general layout, though I left out some trees. The good news is, the available light is soft and even. The bad news is, it’s barely available. Hmm: maybe I could hide that 50-amp genny about three or 400 feet away to kill the noise? Nah, the bride would still nix it and stringing 400 feet of heavy cable would not be kind to the forest floor either.

Plan B: those kids were up in trees, so there must be ways to get up there. How about huge reflectors up in the canopy. 200 feet up. Oh, get real.

To rest my brain, I stared out the cabin window. In the campground, barbecue fires were starting, kids were playing, people were messing around with their trailers, fifth-wheels and motor homes.

A thousand-watt halogen blazed above my head: all those rigs use battery power, big suckers from golf carts or deep cycle marine types. Why couldn’t I do that too? Let’s say four lights, each with its own battery.

I got on the Web and read up on batteries. "105-amp hour" models are rated to hold enough juice to supply 105 amperes for one hour or 10.5 amps for 10 hours or 1 amp for 105 hours: you get the idea. The trouble is, a battery is effectively dead at about one-half capacity, so make that 52 amp hours and some change.

And the voltage drops as the battery drains, so efficiency goes down. Plus, to make a long story short, batteries typically deliver a lot less than they’re rated. 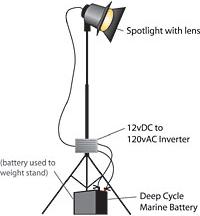 Even the dark glade is fairly bright, so I’d need intense spotlights, especially with blue filters cutting down the output. For portability, I could attach an inverter to each light stand, then plug the light into the inverter and connect the inverter to the battery. By placing the battery on the ground, I could tie it to the stand instead of a sandbag or water weight (Figure 2).

So now, I’m ready to plan, but I need one more piece of info. A quick call to Daddy confirms that there would be music before the Big Event: two pan flutes and a sitar. That’s all I need to know. 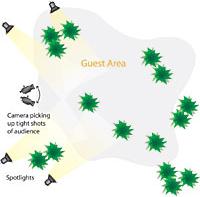 With 15 minutes of music first, I could light my audience separately by placing my lights as shown in Figure 3. This would provide back-cross lighting, as if shafts of light were streaming down from behind and beside the spectators. The camera could pick up tight shots of the audience for intercutting into the footage of the actual ceremony. 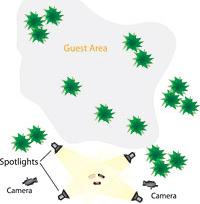 Then, a few minutes before the main event, I would move all my lights to the positions in Figure 4. The spill from the two lights on the bride and groom would pick up the couple’s families for obligatory weepy close-ups.

Okay, so the next day I hit J’s RVs on 101 for batteries and inverters and steer my rental van back to the park. I suddenly realize that a big battery weighs about 30 pounds in the parking lot and 90 pounds in the grove a half-mile away. By the time I’ve got all four in place, plus the inverters, plus the light kit, my legs feel like warm spaghetti.

But it works! With the lights behind and beside the spectator area, I pick up a full f-stop of hard, directional light. When I pull the daylight filers I pick up another 2/3 stop and get a golden light that looks great in the cool glade. When I test the setup for the actual wedding, the results are just as sensational.

Just when I’m feeling smug about being such a smart guy, I realize I have to schlep all this stuff back to the van.

Okay, so it’s three days later and the producer and crew are here, so I have lots of help getting my rig back to the grove. The wedding’s at three and we’re set by one o’clock. Perfect.

Then the producer says, "It’s dark in here." He only just noticed? "That’s why I put this rig together."

"No, I mean darker than when we started."

I can’t see the sky, so I pull my trusty meter and sure enough, we’ve lost a stop. Probably some clouds crossing the sun. Then I hear plop, plop PLOP! Humongous water drops that collect in the canopy before they bomb us, 200 feet below. Before we know it, we’ve got a rain shower, then a storm and then a whole monsoon. The soft forest floor is now muck.

Now Daddy shows up, wearing a newspaper over his head and yells, " It’ll do this all day. We’re moving to the lodge." And there I am in the middle of nowhere standing in a downpour, with four soaking lights, inverters, batteries, and a half-mile trudge to a location I haven’t even scouted for a wedding in two hours.

Light Source: The Wedding (Not) in the Woods: Part 2