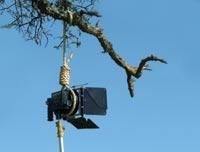 Recently, I saw a magical location light: a 20-foot translucent, helium-filled globe with the light source inside it, floating like a giant moon above an outdoor night-shoot. Its daily rental probably cost more than your whole production budget, but hey: indie videographers have to dream, right?

You bet, but meanwhile you have to work in the real world with a small portable kit or just some halogen work lights from Depot Mart. So let’s see how to deploy them where you want them and then make them stay put.

When you think about it, there are only three ways to support a light: prop it on a stand, clamp it to a handy protrusion like a door, or tape it (yes, tape it) to the wall. We’ll start with the easiest method and work up.

Here’s how: unfold the light stand legs, install light and telescope the column up. What else is there to say? Lots.

Lights on a stand of some sort are obviously the easiest to work with, up to a point. Instruments on lightweight portable stands are infuriatingly top-heavy. To fight this problem:

To anchor the stand, use a water weight: a collapsible gallon plastic jug that you fill on location and hang from the stand with a hook (get them cheap at camping supply stores) or even a bent wire coat hanger. At the end of the day, pour out the water for transport.

To reduce stretching or climbing, learn to adjust the light focus, angle and barn doors at shoulder level, before you raise the instrument to its full height. You may have to lower and raise it a couple times to fine-tune it.

Finally, bring the electrical cord straight down and tape it to the column just above the base of the legs. You can use duct tape, because gaffer tape ain’t cheap. That will put the switch within easy reach and reduce collisions with the power cord.

To shoot angles that are wider than waist shots, you’ll need to place lights without stands, which might appear in the shot. The simplest method is to clamp them to any high object that sticks out enough to offer purchase to the clamp jaws.

Professional kits include clamps fitted with stubby posts the same diameter as light stand tops. Slip the light base onto the post, secure the set screw, and you’re in business. Home-brew rigs might have the halogen work light permanently attached to a clamp. Often bare, serrated metal, these jaws can be murder on finished surfaces. One cure is to pad the clamp with a rag. Another is to dip the jaws into the liquid plastic sold to insulate tool handles. When dry, it provides a nice vinyl covering. Avoid over-padding or the clamp might pop off, often with spectacular results.

Now: where to clamp them? Most public and commercial buildings have drop ceilings: panels supported on metal grids. By pushing up a panel slightly, you can expose enough grid to get a safe grip on it. Other candidates are ceiling fixtures, whether fluorescent or incandescent. With ingenuity, you can usually find a protuberance big enough to host a clamp.

Moving downward, crown moldings will sometimes work, though they’re usually too close to the ceiling to grip. Window valences and moldings are better, and drapery rods are ideal (unless they rotate freely in their supports). Framed pictures are suitable too, if they’re securely hung and if you clamp at the dead center of the frame top.

Finally, try door tops. Open an available door just enough to accept a clamp on the open end of the door top. That way, if the hinged side of the door is in the shot, it will appear closed to the camera.

Clamp jaws hold best if you align them vertically, pointed either up or down. If you need to clamp horizontally, avoid vertical supports. Held only by friction, the clamp will quickly droop or even pop off.

Hiding a light above the frame is useless if its cord droops down into the shot. With grid ceilings, tape the power cord at intervals until you reach a wall. Use gaffer tape here, to avoid marring surface, and be especially careful of ceiling panels, which are easy to deface. No grid? Then you’ll have to swag the cord over to the wall, where you can tape it to a C-stand or directly to the wall.

Here’s an extra tip: with a light high above the action, you’ll probably need an extension cord to reach a power outlet. I install an industrial-grade cord switch a few feet from the plug of each extension cord. That way, I can switch the light’s own switch to ON and control the power from the far more accessible extension cord.

This is the place for a hymn to gaffer tape, which resembles civilian duct tape the way a Bentley resembles a 1996 Malibu (and sells at the same price ratio). Gaffer tape adhesive is at once stronger and more peel-able than the stickum on duct tape. That means it will hold heavier weights for longer periods, but if you pull it up patiently, you can remove it without lifting samples of paint or wallpaper. (Always test each surface first, however.) Gaffer tape is available from some of our mail-order advertisers. When I Googled it, several vendors came up right at the top of the list.

To mount a light to a surface, you tape up a flat plate with a post that accepts the light base. Here’s the drill:

If you’re working with a clamp-on halogen light, make your own hanging plates (as shown) and then clamp the lights to the angle irons on the plates. Be careful though: the geometry of this lash-up will exert more force against the tape because the weight is farther from the wall.

Keep in mind that taped up lights are never perfectly secure. Grim, dogged gravity is always at work, until even mighty gaffer tape surrenders. The heat of the light can also rapidly accelerate this process. The tape separates from most (but alas, not all) of the wall surface, and the light crashes to the floor, destroying itself, the floor and the aplomb of all those present. I check and re-check taped-up lights compulsively, throughout the shoot.

When it’s time to remove the tape, the watch words are slowly, steadily and patiently. Unlike the paper labels stuck on products, gaffer tape will not easily tear. If you pick up one corner and pull the strip very slowly at right angles to the wall, you can almost always leave painted or papered surfaces intact. Incidentally, tall windows make great surfaces for taping because you can pull the stuff quickly without a worry.

We’ll leave you there, at the end of a 12-hour shoot, staring at a strip of metallic gray tape as you pull it off the wall of the CEO’s office.