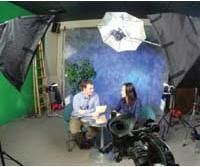 When you're lighting two subjects in the same shot, the problem isn't how to do it but which approach to choose. Lighting methods are driven by the location you're in, the style you're creating, and the number (and type) of lights you have. With all those variables, there's at least a dozen ways to go; so we'll look at just five representative setups, all of them suitable for a two-person interview or a two-shot in a narrative.

Whether you're using one instrument or eight, the basic procedure is the same: