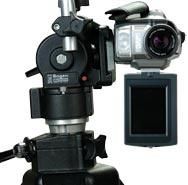 The most powerful video tool at your command is the humble frame that surrounds the image. The four sides of the display monitor determine what your viewers will or won’t see and how they’ll see it. This power lets you play all kinds of tricks with images. You can make subjects float in midair or animate things that are really not moving.


The ability to defy gravity or move still objects is based on two of the universal laws that govern the video universe. Briefly, these laws are: