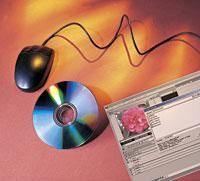 My brother, who lives in Europe, shoots almost as much home video as I do. For years, we’ve wanted to send each other family videos, but we haven’t been able to get past the PAL/NTSC barrier. The two broadcast formats, PAL in Europe and NTSC in the U.S. are incompatible. I looked into transfer services that convert NTSC signal to PAL, but the cost was exorbitant. We even tried sending each other video e-mails but the files were huge. Then it hit me. What if I recorded video onto a CD-ROM and sent that to my brother? After all, CD-ROMs are universal. They’ll play in any computer: PC or Mac. We wouldn’t have to fiddle with tapes or try to open any large, awkward e-mails.

I had created a few audio CDs before, but I never tried to put video onto a disc. I decided to go for it and send a home video on CD-ROM to my brother for his birthday. Guess what? I found that it’s easy, fast and best of all, I already had everything that I needed on my new computer. In this article, you will learn the basic steps it takes to put your own video onto CD-ROM.


Virtual Studio in your Computer


If you already edit video on your computer, chances are you’ve already got everything you need. Here’s a quick checklist of hardware and software that you’ll need to create a video CD.