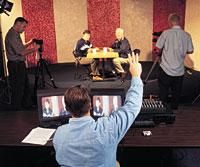 Broadcasting your program on leased access cable, an opportunity offered by most U.S. cable systems, can be an extremely cost-effective way to launch new programming concepts or sell products. And best of all, leased access cable can actually provide you with a new revenue stream.
The practice has been used successfully by videographers and producers in a wide variety of programming concepts, including how-to’s, infomercials, travelogues, talk shows, children’s programs, comedy shows, restaurant reviews and local music videos, to name just a few.
The Federal Communications Commission got the leased access ball rolling when it established the Cable Communications Policy Act of 1984. The legislation compelled cable operators of systems with more than 36 channels to set aside 10 to 15 percent of their stations for commercial use.
"Leased access," the act stated, "is aimed at bringing about the widest possible diversity of information sources for cable subscribers.
Locally produced infomercials tend to be the most popular form of leased access programming because of their money-making potential. The process for getting your program on leased access is rather simple.

It is important not to confuse leased access with public access. Public access is one arm of a three-part federal program that mandates each cable system to provide public access, educational access and government access programming. Cable systems allocate these non-commercial channels to serve their communities. Leased access, on the other hand, offers a commercial programming channel, or channels, to enable producers time to display their programs. The only restrictions are programs deemed "inappropriate for the community standards, due to gratuitous sex, violence or profanity."

Leased access on-air time is extremely reasonable. Generally, the cost is approximately $100 per half-hour for leased access time on larger cable systems, and as little as $10 on smaller systems. The cable system is permitted, however, to charge different rates for different time-slots (as is common in broadcast television), so peak-time would be more expensive than off-peak.
You may also be required to provide proof of a $1 million general liability insurance policy (and possibly a $2 million errors & omissions policy) naming the cable system as co-insured. Once that policy is in place, your insurance agent can add each additional cable system you work with as a rider for a very nominal fee.
Since you are paying for the time on the cable system, you are at liberty to sell advertising for your program. Aside from the leased access time and perhaps a few operational fees, the cable system generally does not take a percentage of your advertising revenue.

Let your Advertisers Pay for It

Let’s assume that you’re producing a show about gardening, and you’re going to lease broadcast time on your local cable system. Potential advertisers, who would include nurseries, gardeners, flower shops, tree-trimmers and landscapers should offset your broadcast costs. Not only could you charge them an advertising fee, but a production fee as well, since most small businesses haven’t already produced a commercial. You’ll be able to provide the service of creating one especially for them.
You might take out an ad in a local newspaper to promote the fact that your program will be on XYZ Cable at such-and-such a time. Mention the advertisers in the ad. It will act as another incentive for them to buy their advertising time from you.
Also, contact the cable operator about placing cross-channel promotional ads for your program, where they’ll promote your show on other channels.
The general rule-of-thumb to determine how much to charge for your advertising is to take the total expense of producing your show and divide that figure by the number of 30-second spots you have available to sell. That will tell you how much to sell each ad for in order to break even. Add 15 or 20 percent to determine your basic ad rate.
Many leased access producers maximize their profits by purchasing time (and selling ads) for the same program on several cable systems in their area. And by running the show on additional cable systems, the advertising rate can be reduced and the profit-per-spot can increase.

One of the most important aspects of producing leased access programming is the overall production quality. Unlike public access, which generally features "talking heads" in a very bland setting, with a wilted plastic plant in the background, leased access programs reflect the reputation of the videographers and producers putting the programming together. Like everything else a professional does, the leased access programs need to be professional. Decent production values are crucial for the advertisers, and for the audience. Remember that what people see on television that has your name on it is your only real promotional brochure.

Get the Format Right

The cable system may accept your program in 3/4-inch U-Matic, BetacamSP or a digital format, so check with the system to determine which format they prefer. It is highly unlikely that a cable system will accept a VHS tape, as the quality would not generally be up to acceptable engineering standards. While digital formats that record high-quality images are becoming the format of choice for producers, many cable stations still do not accept submissions on Mini DV or Digital8. Many stations do, however, provide a large-format record deck so producers can transfer their footage to the proper format for broadcast. Producers should discuss format requirements and tape transfer options with the cable company up front. Also, when you bring the tape to the cable system, it needs to include everything in it – program, commercials, credits, etc.
Leased access can open a whole new medium for videographers. As cable television becomes more diversified and digital set-top boxes begin to offer consumers literally hundreds of new channels, leased access will give entrepreneurs the opportunity to be an integral part of that exciting and ever-growing industry. If you have the inclination, now might just be the right time to get things rolling in leased access.