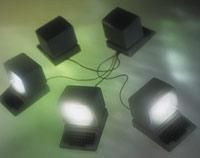 Natalie MacGowan Spencer produced her first video for the Web just a few months ago, but by Internet standards that makes her an "old timer." It’s been plenty long enough to convince her that the Web is a viable and exciting new medium for up and coming video producers. "It’s allowed me to spread my wings and fly," she declared recently. "All the video editors I know want to try it out, to play with it. We don’t know what it can do yet, and we want to check out its creative possibilities. We’re all stimulated by it and tickled by it.
Before discovering the Web, London-born Natalie had made short films and done hair and makeup for music celebrities and commercials. Her debut piece for the Web was a music video of the British band Olive. Created specifically for the Web, it was made for Eveo (www.eveo.com). Its bold, assertive style swiftly attracted a great deal of attention and it became one of the biggest hits of the site.
"When you’re making something for the Internet," she said, "the screen space is so much smaller that you want your visuals to be extremely strong, so they really pop out at you, almost like a 3-D effect. And when you’re shooting on video, you should build on what video does best and not try to imitate film. Film is soft and subtler, but video is very literal and the images are very striking. In my opinion, you shouldn’t fight it, you should go for it.

Eveo, the site that Natalie made her music video for, is one of many Web sites that feature shorts. However, the site is of special interest to videographers because of its emphasis on pieces created on video. Most of the other sites feature shorts first made on film, often for the film festival circuit, and then transferred to video.
Alan Sternfeld, Chief Content Officer of Eveo, explained recently that the goal of Eveo is to give videographers a forum for making and showing short, self-expressive pieces, "little movies." Sternfeld says these original pieces, each termed an "eveo" (short for "e-video"), "can be made by anyone about anything." He sees Web shorts as a distinctly new format and said they are being introduced at his site much in the same way music videos were first developed and promoted by MTV. Eveo has an open-door policy and solicits work "from people who just got a camcorder for Christmas right up to the pros," according to Sternfeld.
Eveo’s library contains a large portion of non-fiction pieces, an area that often appeals to video hobbyists operating on lower budgets or with less experience. The subject matter is wildly diverse everything from true stories about homeless people to a love triangle involving three kindergartners. To create a successful non-fiction video for the Web, Sternfeld advises that videographers do something based on personal experience. "Use this as an opportunity to reveal something about the world you live in," he recommended.
Sternfeld believes working in this new arena can be a tremendously liberating experience and unlike television, with its rigid formulas and set program lengths, the Web offers uncharted creative freedom. He also applauds the fact there are fewer human roadblocks. "The Internet is a great disintermediary phenomenon," he asserted. "It cuts out all the middlemen and gatekeepers.

One team of creators who has benefited by the Web’s freedom is the small group of friends who made a startling short called Sunday’s Game. According to David Garrett, one of the short’s two producers, the group deliberately set out to make something that would both shake people up and showcase their sensibilities. The short tells the story of a seemingly bland quintet of elderly ladies who spend Sunday afternoon playing a lethal game of Russian Roulette. Although the four creators of Sunday’s Game had shot it on film and envisioned it as a calling card piece to be shown at film festivals, every festival they approached rejected it. It wasn’t until executives at the Web site ifilm (www.ifilm.com) recognized its merits and saw its strong subject matter as an asset, not a liability that the short got its chance. When Sunday’s Game debuted on Ifilm, it received so much positive attention (as well as stirring up heated controversy) that members of the team now have various TV and motion-picture deals at some top Hollywood studios.
Their story is real-life rags to riches: at the time they made Sunday’s Game, they were unemployed. One of them even had his car repossessed before success hit. None of the team had gone to film school; Garrett, for example, was an attorney. "Our school was the school of hard knocks," he commented recently. "We broke a lot of rules. The pace of Sunday’s Game was really slow, especially for MTV fans, and it had a lot of old lady talk. In fact, it broke three taboos: against using old people, against guns and against suicide." Garrett believes that one of the main reasons Sunday’s Game was so successful on the World Wide Web was because it was unique in both viewpoint and subject matter. His advice for making shorts for the Internet? "Make something you can’t see anywhere else, he said.

A New Place to Shine

Like David Garrett, Christopher Bell is convinced that content is critically important. He, too, originally set out to make a film to be shown at film festivals, but his quirky labor of love, Billy Jones, took him three years to complete, and by the time it was finished, the Web had matured enough to be a desirable venue. Like Sunday’s Game, it made its debut on the Internet site, Ifilm. And it seems to have brought Bell the kind of attention that would be hard to attract in the film festival world: he won top honors at the first annual Yahoo Internet Life Online Film Festival, and he’s had a flurry of meetings at top studios and talent agencies.
Billy Jones is a dark comedy about a 12-year-old smoker, and not only contains a strong anti-smoking message, but is done in a highly original visual style. Bell said that he was inspired to make the film because a good friend of his was hooked on smoking. "It’s a story I really wanted to tell," he commented recently. "And I got other people to believe in what I was doing, too, and to do top quality work on it… sometimes for free." Though produced on a small budget by Hollywood standards, Bell paid close attention to every detail. "Everything in a frame should have a reason for being," he stressed. "Especially on the Internet, you need to avoid visual clutter.
Another director whose work unexpectedly found a home on the Internet is Rafael Fernandez. His short, Oregon, is a minimalist, chilly sci-fi story that has received glowing comments from viewers who have watched it on the Web. Made on film, Oregon debuted simultaneously on Ifilm and at the prestigious South by Southwest Film Festival.
Like a number of other Internet success stories, it was Fernandez’ first production. Before making Oregon, he had spent five years working as a computer programmer. Though he had studied writing in college, he had no other skills relating to making a film.
So, to make up for his lack of production experience, he assembled a "kitchen cabinet" of friends and acquaintances that were experts in various specialties. He was still working at his day job while shooting the short. "It almost killed me," he confessed recently.
Like Garrett and Bell, Fernandez believes that to be successful on the Internet, you must first start with the subject matter. As for shooting, he advises keeping the real estate the small screen space in mind, and avoiding such obvious pitfalls as giant establishing shots or shots of tiny, intimate details. Overall, though, he believes it isn’t necessary to worry about the technology or the present limitations of the Internet. "You can get around the limitations," he asserted recently. "And the technology is going to catch up, anyway. I think of the story I want to tell first, and the venue second.
Although he was initially hesitant about putting Oregon on the Web, it proved to be a good move for him. It led to numerous professional contacts and opportunities. Overall, he feels that the gamble he took in making his short has more than paid off. Currently he has a contract to make music videos and a possible deal with the Sci-Fi Channel. "It’s been a life-altering experience," he affirmed.