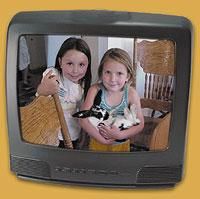 In the last year, DVDs have really taken off in popularity. Consumers are embracing them at a pace faster than they ever embraced VHS or any other video format. As a videographer, you’ll soon want to burn your videos into DVDs, lest you get left behind as the one guy who still uses videotape. Not only that, but there is so much more you can do with a DVD than you can with videotape. It opens new levels of creativity for the video artist.

Most of you are probably familiar with DVDs by now, but just for the record, let’s run down some of the advantages and disadvantages of the format.
First, DVDs are digital. This is both an advantage and a disadvantage. For the most part, the picture on a DVD will blow the doors off of VHS. It is much sharper (400-500 lines of resolution for DVD versus 200ish for VHS) and it has brighter colors. If there is a disadvantage to DVD, it is that an improperly compressed DVD can have visible artifacts. Many of the early Hollywood-released DVDs were not compressed properly, and you can see their artifacts in scene after scene. However, when done right, the format’s picture is sharp and clean.
Second, DVD offers more sound. Instead of the hi-fi stereo of VHS, you get Dolby Digital AC-3 audio. This allows you to output five separate channels of audio, just like a professional filmmaker. Unlike the mono "surround" channels of "Dolby surround," the rear "surround" speakers of AC-3 are themselves stereo.
Third, and here’s where you get into features of DVD that you may not have known about: you can make your own interactive menu systems and provide several different versions of the same basic movie on the same disc. You can make a director’s cut of your video without having to record the whole second version on the disc. You can just have the different scenes and have the DVD piece it together seamlessly as it plays by, skipping certain chapters and including others. This makes the DVD disc an option for non-linear video entertainment because you don’t have to store your video on the disc in the order in which it will play. With these options, DVDs are a whole new world for video creativity.

If you want to make your own DVDs, you re in luck these days. Easy to use, consumer-oriented, DVD-creation tools are already on the market. They all aim toward the same basic goal of creating the necessary introductory menu system and allowing you to include whichever additional multimedia files that you want such as graphics, text, sound or video files. Most of these software packages even come bundled with newer MPEG-2-based capture boards. This way, if you buy the capture board that captures video into the MPEG-2 format, you’ll already have the software necessary to make those MPEG-2s into DVD files.
The bundled programs include titles such as Minerva Impressions, Sonic Solutions DVDit! and Spruce Technologies DVD Virtuoso. These aren’t the only fish in the sea of DVD, but they are some of the big ones. You’ll be in good company if you choose one of these programs because they have established themselves in this first wave of consumer DVD authoring packages.
Minerva Impressions comes bundled with hardware from Pinnacle Systems. Impressions competes directly with the Spruce DVD Virtuoso, which comes bundled with Canopus Amber DVD hardware. You don’t have to buy hardware to get these DVD authoring software, however. Sonic Solutions DVDit!, for example, isn’t bundled with hardware, but it offers discounts to owners of other hardware/software packages. This way, you can afford to use this other software, even if you’ve invested most of your available DVD-authoring cash into MPEG-2 capture hardware.
If you get MPEG-2 hardware, you won’t have to perform a lengthy re-encoding of the video from whatever format you re using into MPEG-2. Having the hardware will usually result in a better picture than using software alone, and it will be a lot faster to output onto disc. Even if the software isn’t bundled with the hardware, you won’t pay much more for DVD-creation software than you would for editing software.
You don’t use these DVD software packages to edit video. For editing, you still use the same video editing software that you’ve grown to know and love. Once you have a final rendered edit of your video, complete with titles, trailers and whatever else you want to include, you’re ready to create a DVD. These packages can make your DVDs play like Hollywood’s or you can add even more interactivity than most of what Hollywood offers up today on DVD.
First, you take all of your clips and make them into "chapters" on your disc. This way, the viewers can freely fast forward and rewind through your video, like using the track markers on a CD. If you plan on making several different versions of the same movie on the same disc, pay special attention to where you mark your chapters. The order of these chapters will let you include and discard certain clips in the video when you play it back, depending on the version of the video the viewer has chosen to play.
After you’ve specified the chapters of the video, you’ll want to create the menu system that your DVD will use to let viewers navigate through the disc to see exactly what they want. You create your menus in a program like PhotoShop and import them into the DVD-creator program. Then use the DVD-creator program to link together the hot spots you want. These links act much like hyperlinks do on a Web page. This way you can build a computer-like multimedia page that you can use from a standard DVD player. This is exactly what you are looking for in DVD-creation software.
Basically, you keep adding clips to the disc and create a menu system that allows you to access the clips in whatever order you specify. Normally, this would include putting the clips of a movie in a linear order, but seeing as this is a new medium, and most videographers are not making two-hour feature films, this approach to DVD may not be appropriate for you. Make full use of the options that DVD offers because the first people to use these options in a creative fashion will be the vanguard of the DVD generation.
There is also a language option available on DVD that lets you include several different versions of the soundtrack. Many Hollywood discs include a soundtrack that includes the director, producer and actors talking "behind the scenes" about the production of the movie. You could also use this type of approach to allow your video to be "kid-friendly" and omit any adult language, if that’s what you want to do.

Getting it on Disc

Once you’ve completed your DVD file, you’ll have to take it to a DVD-duplicating house (making your own discs is still expensive). Many duping houses will accept masters on DVD-RAM. Find one that does, then copy your project to a DVD-RAM cartridge. A DVD-RAM cartridge is a bit expensive (about $40 a pop) to use for making simple copies, but its great storage capacity makes it great for making masters to send to the duplicating house. You can get DVD-RAM drives from companies like Panasonic for around $500.
Once you’ve finished creating your master disc and the graphics for your cases, you’ll be ready to have your production-run of discs. Then it’s up to you to get enough people to buy them. Or you can just get your DVD-making skills down pat, and in a year or so, the tools to duplicate your own discs for mass production probably will have dropped enough to make it cost-effective to do from your home or office.
When that price shift happens, you can be sure that burning a DVD will be as common and as easy as burning a CD is today. Think of how exciting it will be to watch your own multimedia creations right on your television set. DVDs are the wave of the future for video. Get ready to ride it.