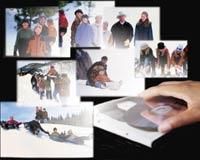 Now that CD-R (recordable compact disc) drives have become affordable and a blank CD-R disk costs about the same as a blank VHS videotape, isn’t it time to think about putting some of your videos onto CD-ROM? It doesn’t take a super-powerful computer to get the job done; all you really need is a video capture card that’s capable of recording video at 320×240 resolution or greater, some sort of video editing software, a sound card and a CD-R drive.

The benefits of recording video onto CD-ROM are many. Though the size and resolution of CD-ROM-based videos are not as good as videotape, CDs are a better archiving medium than tape. Also, making multiple-generation copies for family or friends is a snap, and results in perfect duplicates with no generation loss. It’s also easy to incorporate your home videos into your own CD-ROM multimedia presentations, using the right software.

So if you’re interested in making your own CDs full of home video, fire up your camcorder, buy some blank CDs and get ready to burn some home movies.

Before you begin shooting your CD-ROM video masterpiece, take some time out before hand to plan the production.

The most important thing to remember when you’re planning a CD-ROM-based video production is that whatever else your video is going to be, it’s certainly going to be small. The typical resolution used for CD-ROM video is somewhere in the range of 320×240 (or, if you’re working with DV video, 360×240). This resolution is handy because it’s one-fourth the resolution of a typical full-screen digital video file (640×480, or 720×480 for DV). At such small resolutions, it’s difficult to make out any kind of detail, so the most important things to remember are: get close and keep it simple.

Imagine, for example, that you’ve shot a lineup of 50 or more people at a family reunion. If you simply set up a wide shot of the whole group, you might be able to pick out Aunt Louise when you later watch the videotape on a TV monitor. Digitize the footage at 320×240 resolution, however, and you’ll be lucky if you can tell the men from the women. A good solution for this kind of problem would be to get closer and shoot a slow pan or handheld dolly shot of each face.

Also, when shooting for CD-ROM video, be sure to keep the camera moves to a minimum. The small size of the video makes it more difficult to follow busy, confusing shots. As always, you should move the camera only when you have a good reason to do so. The above example of the pan or dolly shot illustrates a good reason to move the camera; even better, however, might be to get a succession of static shots with only a few people in the frame for each shot. This will make it much easier for the viewer to keep track of who’s who and what’s going on.

What you’re aiming for here is simplicity, and that includes the location you shoot in as well as the patterns of the clothes that people wear. When advising your talent what to wear, stick to solid colors, and avoid busy patterns like paisley or plaid.


Once you’ve finished shooting your CD-ROM video footage, it’s time to capture those clips onto your hard drive and begin editing. Probably the most important thing to remember when capturing your clips is to set the resolution to what it will be when you output the finished video. This will help you to avoid the horrible artifacts that sometimes result when you re-size a clip. If you find that you must capture at a higher resolution than you plan to output (this may be the case with some FireWire capture cards), then plan to output your video at a resolution that’s an exact multiple of the capture resolution. So if you capture DV at 720×480, set your editing software for output at 360×240 (exactly one-fourth the resolution of 720×480).

The rules for editing pretty much follow the rules outlined above for capturing: keep it simple. A few effects might be nice, but highly complicated, high-resolution filter effects may not be visible in the tiny screen that CD-ROM video relies on for playback.

When choosing titles, be sure to use a font that’s relatively large in comparison to the overall size of the video, or else you may have a readability problem. Also, resist the urge to use complex patterns with your titles, and choose a color that contrasts well with the background video.


When you’ve made all of your editing decisions and it’s time to render your final movie, it’s important to consider the most limiting factor in CD-ROM video: space. There just isn’t that much room on a CD-ROM (around 650 megabytes) and what space there is gets taken up fast by digital video.

Of primary importance is the type of codec (compression/decompression scheme) you use to compress the video. For maximizing space at the expense of resolution and overall quality, MPEG-1 is hard to beat. Remember, too, that your production won’t have to be output to videotape, so you don’t have to worry about using hardware-assisted codecs (like MJPEG and DV) when you render the video. This may make rendering times a little slower, but it’ll result in a video that can be viewed on anyone’s computer.

Don’t hesitate to try several test renderings of your video, just to see what it looks like and how much space it takes up at several different compression ratios. If you have a lot of video you’d like to fit onto one CD, and you can squeeze the video a bit more without a major drop in quality, then go ahead and crank up the compression ratio a notch or two. Conversely, if you don’t have that much video to fit onto the disc, then ease back on the compression a little and get the best quality you can.

One final note about compression and rendering: it’s important to bear in mind that the CD-ROM drive you use to play back a video may be faster or slower than someone else’s CD-ROM drive. This means that although your lightning-fast 44x speed CD-ROM drive plays your video just fine, your friend’s old-school 12x drive might not be able to keep up. So before you render, decide what speed you’d like to be able to play the CD-ROM at, and then adjust your compression accordingly.

In general, video that’s more highly compressed will play better on slower CD-ROM drives. If your MPEG compression software or video editing software allows you to dictate the playback data rate you desire, use the following formula to determine the rate you want:

If, for example, you want your CD-ROM video to be viewable on a 12x CD-ROM drive, then your finished video should play back at something under 1800 Kilobits per second. Note that the desired data rate should be less than, and not equivalent to, the target CD-ROM’s playback rate, because the listed speeds for most drives are maximum speeds, not sustained speeds. If you shoot for half or maybe three-quarters of the listed speed of the drive, you shouldn’t encounter any playback problems.


Before you begin to burn your videos onto a CD, consider your options. Would you like to present your videos in an organized graphical format, like a CD-ROM-based Web page or a Microsoft PowerPoint presentation? Or do you prefer to conserve space and simply burn a list of video files onto the CD, with maybe a text file to describe the contents of each clip? The choice is yours.

If you know a little HTML, or if you have access to an HTML editing program, then building a simple CD-based Web page with links to your videos is a good way to organize your project. Almost all computers nowadays have Web browsers, so all a potential viewer of your CD-ROM-based videos would have to do is double-click your index.html file to launch a Web browser and begin viewing your clips.

Now that you know how to create your own CD-ROM videos, go ahead and give it a try for yourself. It’s much easier than it looks, and it’s a great way to share your videos with friends and family.