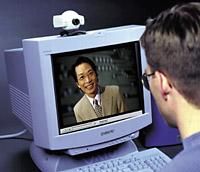 Every die-hard Web surfer has seen a live WebCam at some time or another. Some are pointed at famous sites such as the Statue of Liberty, Yosemite Valley or Walt Disney World. Others merely provide a face-to-face real-time image for more intimate chat sessions. Still others provide a glimpse at the mundane lives of people’s pets, living rooms, back yards or places of employment. Whatever their purpose, WebCams have become a popular phenomenon, and at any given time it’s possible to find thousands of them on the Internet.

In this month’s Video Out, we’ll be taking a close look at the WebCam phenomenon. We’ll look at some of the most common applications for WebCams, and provide simple instructions on how to put your own live video feeds onto your Web site. Whether you aim to set up your own WebCam rig or you’re just looking to find some interesting sites with live visuals, you’ll find that the live camcorder and the Internet-ready computer were made for one another.

For those who have never seen or heard of WebCams, here’s a brief synopsis: a WebCam is any device that allows Web surfers to see a "real-time" view over the Internet–a view of just about anything imaginable, from a closeup shot of a fish tank to one of the aforementioned historical sites. While some live WebCams provide a moving picture via streaming video technology, the vast majority simply give the viewer a still picture that can be updated each time the page is reloaded.

While it’s true that pornographers have fully embraced the WebCam–any Web search for the term "WebCams" will quickly confirm this fact–the culture of the Internet-driven live camera has spread far beyond the boundaries of the mere strip show. In fact, the fabled beginnings of WebCam lore started with a group of computer science students whose purpose was anything but pornographic. There’s a rumor going around that the very first Internet-enabled camcorder was pointed at a coffeepot in the kitchen of a university computer lab. Story has it that the lazy students (and professors?) devised this scheme so they would have an easy way to tell if the coffeepot was full or empty without having to leave their computers.

Not long after the first WebCams appeared, people started to experiment with a number of applications. Soon, a few intrepid souls decided to put their entire lives, or a significant part of them, on camera so that anyone with an Internet connection could take a peek. Though arguably not displaying the most compelling visual content, the JenniCam has logged thousands of registered paying customers in the past few years.

WebCams are also finding their way into Internet chat rooms. They help to make the experience of a live chat session a lot less anonymous. With a live camera running, it’s possible to tell whether you really are a twenty-two-year-old college student living in the dorms as you claim, or a middle-aged accountant living in suburbia, pretending to be a twenty-two-year-old college student.

More recently, WebCams have taken a number of more serious roles. Police and city planners have used them to survey high-crime neighborhoods and monitor troublesome traffic areas. Day-care centers provide parents with an easy way to check in on their kids without getting up from their desks at work. Employers use them to monitor working conditions and productivity. If you connect one to a motion sensor, a WebCam can provide a high-tech, low-budget security solution. It’s even possible to set up a kind of video-phone with a WebCam, giving parents a look at the shocking new hair cuts and nose jewelry of their kids at college.

As with many Internet-related technologies, people use WebCams in a number of whimsical situations. Pets are a common theme of the WebCam crowd, as are living-room cams and front-door cams. If you’re concerned that your idea is too strange or even too mundane for a WebCam, don’t worry: chances are, it’s already online.

If you’ve already got a camcorder, a video capture card and an Internet-capable computer, you already have almost everything you need to set up your own live WebCam. The only missing piece is the software that transfers the images from your computer’s capture drivers to the Internet. Or, if you prefer to buy a complete WebCam kit that includes a small low-resolution camera and all necessary software and cables, take a look at Intel’s Create and Share Camera Pack ($104), Creative Labs’ Video Blaster ($70) or Logitech’s QuickCam Home ($100).

There are two main types of WebCam software: the type that sends an up-to-date image every time a viewer clicks on a link, and the type that regularly updates a live picture at a Web site. The former will give the viewer a live picture as often as the viewer wants, but the latter must be set to some interval, such as a new picture every thirty seconds or so.

To set up the WebCam, simply connect a video cable from your camera’s video output jack to the video capture card’s video input jack and turn the camera on. If your camcorder was designed to shut off every five minutes or so, you may have to leave the tape door open to prevent this from happening. Also, be sure to connect the camera’s AC adapter for long-term usage, so you don’t have to worry about a battery running out of juice.

Once the camera is up and running, plug the relevant information into your WebCam software. The most common type of WebCam software will transfer an image at specified intervals via FTP (file transfer protocol) to your Web site from your home computer. This means that you should have a connection up and running whenever you’re ready to go live. If you’re thinking of setting up a 24-hour live feed, then you’ll need a secondary phone line dedicated to modem use, or some other way of permanently connecting to the Internet.

Once the software is configured, it’s simply a matter of launching the application and pointing the camera at your subject. Be warned, however, that issues such as composition and lighting are just as important for a WebCam as they are for a normal video shoot. It’s perhaps one of the most frustrating things about amateur WebCams: grainy, poorly lit images of subjects that are too far away to provide any detail. If nothing else, drag your subject into the sunlight, turn on all the lights or set up an extra lamp.

The most important thing to remember about WebCam composition is: get close. Use the zoom control to enlarge your subject on the screen as much as you can. If you’re providing an image of your face for a live chat session, then don’t be shy. Fill the frame with your head and shoulders at least, and make sure the light falls on your face instead of on the back of your head.

Be kind to your viewer. When setting up the image preferences in your software, keep the size down to 320×240 or so. Full-screen images can take a long time to download at 28.8kbps speeds (the most common speed for phone modems). Also, don’t overcompress the image. You don’t have to worry about capturing every frame, and setting the image at 320×240 resolution provides the equivalent of 4:1 compression from the start (because 320×240 video has 1/4 the pixels of full-screen 640×480). If you’re using an MJPEG capture card, set the compression to 5:1 for the best results.

Though some see the WebCam phenomenon as a passing fad, others claim it could have profound effects on our culture. At the very least, WebCams give easy access to a technology that has long been in the realm of science fiction. And they provide an easy way to catch a glimpse of the Golden Gate Bridge–if it’s not too foggy in the Bay, that is. 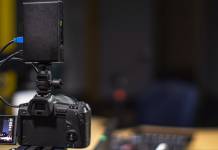 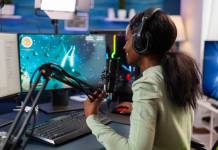 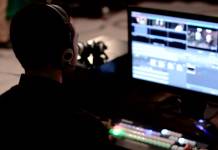