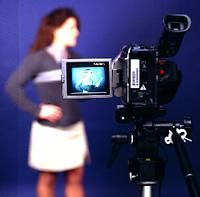 Sooner or later in your video exploits, you’re going to need some talent: someone to fill the screen, or someone to read lines on camera. Sure, we all shoot birthday parties, sporting events, school plays and relatives’ weddings. While this type of videography is certainly rewarding, and often times profitable, many video nuts yearn for a greater gratification. Their attraction to CCDs and flying erase heads stems from a deeper passion, that of entertaining an ever growing audience with something more than a record of daily life. They want to "go Hollywood."

Going Hollywood does not necessarily mean you have to produce a full-length feature movie. What it does mean is that you want to produce something you’ve scripted on paper days, weeks or even months prior to pulling the camcorder out of its case. You might want to produce an industrial training tape, instructional video, television commercial or yes, even a full-length shot-on-video movie. To pull off any of these productions, you’re going to need to find people to fill the roles that the script calls for. This can be as simple as recruiting your four-year-old nephew to ride his three-wheeler in a bicycle safety tape, or as complicated as rounding up 60 extras for a crowded classroom scene in your own mini epic. Either way, you need warm bodies to move and/or talk in front of the lens, and the process for finding them is the same no matter what the parameters of the project.

Community theaters are a smart first choice in finding talent. The folks that put on the shows in this venue are very dedicated, professional and talented, and they are often looking to fill their non-performing hours with side projects. A community theater offers you a varied age, race and gender mix as well, filling most needs of any video production.

Try local or regional colleges in your area. Colleges will provide you with actors and actresses willing to perform in even the smallest of programs. Performing in a video for a theater student is the equivalent of working part-time in an investment company for a business student. It is real-life professional experience in their chosen field. They are usually only too happy to comply with your needs and try to meet all of your demands.

You can find talent anywhere you look, if you’re willing to look hard enough. We’ve all heard stories of talent scouts discovering Hollywood stars by just walking down the street. Many people possess an untapped talent for acting; you just have to weed through all those who haven’t any. Finding would-be DeNiros off the street is a little tougher than acquiring talent from a theater or school. But it’s possible, and the procedure for doing so is what we’ll investigate in the following section.

Before you begin looking for talent, you have to know what you’re looking for. This requires you to boil down every character and role in the script into a concise, one-to-two-sentence definition. Suppose you are working on a video project. The script reads, "Mr. Johnson is getting ready to enjoy an evening on the town with his wife Joyce. They are meeting their kids for dinner to celebrate twenty five years of marriage. Mr. Johnson is ready at the bottom of the home’s stairway, waiting for his wife. He spends the time adjusting his glasses and tie."

Immediately you know that you’ll need both Mr. Johnson and his wife. They are characters between 45 and 60 years old, homeowners, with children living away. He wears glasses, and is probably a professional. To describe Mr. Johnson, you might write:

This gives a clear description of the type of actor you are looking for. The amount of detail you gather from the script depends on the actions of the character. You may embellish the description with your own items (jolly, overweight) if you think this will add realism, empathy or believability to the role.

It’s important to take time to think about each character’s role in the production carefully when creating these profiles. You want to put together the best description possible in order to guide talent in their approach. This step also helps you define what each character’s motivations may be, which becomes important during the production phase of the project. Once you’ve accomplished this task with every on-camera appearance in the script, you’re ready to go looking for talent.


You know what you need. You know what you want. Now how do you find it? Attracting talent to a project is easy if you’re not too picky. But if you want a good batch of people to choose from, it’s going to require some phone and leg work on your part to make it happen with the best results.

The simplest step in notifying potential actors to your needs is to hang notices. There are two schools of thought with regard to notices. The first directs you to posting notices only in locations where qualified talent may run across it. You know, college and community theaters, talent agencies and any acting schools in your area. The second approach finds you posting notices anywhere a human eye may fall. Basically it’s dependent on your preferences and the scope of the project. If you need 200 extras to fill a football bleacher, you don’t need to be selective about where you announce the project. On the other hand, if you require only two well-trained actors for a television-style talkshow, staying with theater postings is the way to go.

Now that we’ve covered locations to place flyers, here are some guidelines as to what to include, and not include, in any talent-seeking announcement flyers:

Have someone greet people when they arrive. When ready to start, the greeter should usher each person into the audition room, introducing them to you. If you are male and need female talent, it’s nice to have another woman in the room to make the actress feel more comfortable and vice versa.

Don’t waste time on idle small talk, especially if you have a hall full of people waiting to audition. Ask the talent to do the reading, with yourself, or someone else associated with the project reading the contrasting lines. Never bring in two applicants at the same time to read against each other. Be sure to have your camcorder running during the readings, as you may not have time to take notes. Reviewing the tapes later also helps in remembering certain qualities that you may have forgotten from the earlier candidates. After the read, thank the applicant and move on. Again be sure to post the fact that only those chosen for roles will be called back.

Once you’ve gone through all of the applicants, the time comes to match roles with talent. Only you as the director of the project can make that choice. More often than not, you’ll make that decision as soon as you hear the words exit the actors’ mouth. When these decisions are made, you’ll come to the most enjoyable part of this whole process: alerting the chosen talent of their successful audition.

If carried out systematically, finding talent can actually be a rewarding activity. It forces you to better define characters in a script, meet a lot of interesting people and make some hard decisions. Also, it’ll let you put the best possble people in front of your lens, which is the whole reason you started the process in the first place.