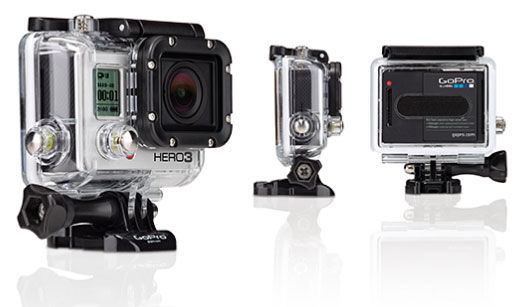 After hearing about the long awaited release of the new GoPro Hero 3 Black Edition, we at Videomaker were eager to sit down and discuss this exciting new product with GoPro’s own David Newman, Senior Director of Software Engineering, and Kevin Bourke of BourkePR. However, we were very surprised and impressed as to where the interview actually went.

Once you think you’ve seen it all, a new emergence has surfaced with the latest offering from GoPro. Not just limited to weekend adventurers wanting to show their friends how hard they play, the new GoPro Hero3 Black Edition achieves a new level of stature among videophiles and professionals alike. With the new design, the GoPro Hero3 Black Edition offers 12MP photos (up to 30 photos per second), 1080p 60fps, and a wide-angle 1440p 48fps to capture a wider view range, all while reducing any previously criticized fish-eye effects. Because of this, professional videographers are now using multiple GoPro cameras during filming for blockbuster movies as well as capturing action shots during reality television such as Survivor, Mythbusters, Top Gear, and various other television shows; a true device for both consumers and high-end broadcasters.

ProTune, included in the new firmware, is able to do so much in the image processing stages, that the user can now get more dynamic range and higher resolution than what their delivery format allows. The GoPro3 is gathering more information than what web or television is able to display.

Newman explains, “Television is a limited color gamut, limited dynamic range display device, we now have more capabilities in the camera than what the TV is capable of showing.” This allows a professional to use that data and choose what part of that data is going to be delivered by using ProTune and the raw data which has been recorded by the camera. This opens up a wide variety of uses for professional videographers and photographers alike. The data collected uses the full RAW color space and is not limited to Rec709, so this gives you a much wider gamut to utilize in your post-production; it is not limited to the colors which are defined through Rec709.

“We can now shoot this camera in raw mode so people can push it even further,” Newman states, “they can colorize it and have even more flexibility in post production than any other camera of this type in history”. For the amateur videographer, think Instagram for video. With full control of contrast, exposure, white balancing, saturation, and the color gamut, you can tailor it to your final broadcasting device to meet the needs of web, TV, or high end devices.

“We’ve gone way beyond HD now in the Hero3 Black Edition. With the 2.7k mode, you can shoot at 24, 25, 30 fps, it samples the full sensor,… it reads the full 16×9 image off the sensor and scales it down and oversamples at 2.7k so its incredibly sharp”, says Newman. “We feel that a lot of people who are using it professionally will use this mode, even though we know that 1080 is going to be the common mass distribution format, the 2.7k will be an acquisition format with oversampling and at 45Mbps it is just an incredibly stunning mode.”

The Black Edition is a new platform, with an even more powerful DSP and brand new larger sensor which gives it better noise reduction capabilities as well as better in-camera processing. For low light, noise profile improvements, dynamic range improvements, ProTune helps to manage all aspects of the image a user would need. ProTune goes up to 45 Mbps for 2.7k and 4k resolutions, this allows the GoPro Hero3 Black Edition to be the first camera to use 1080p60. Most users currently use 720p60 so they can film slow motion effects. However, using 720p120 produces much crisper images and gives you additional control over the sequence. The 4×3 960 HD mode uses a taller frame to assist in situations such as surfing where it allows you to crop and move the image around in post-production.

The GoPro Hero3 Black Edition also has the ultimate time-lapse shooting mode. Using the 8MP photo mode is like a burst frame mode, but you could put it into 4k15 or the 4k12fps and collect startling images continuously for the battery life of the camera, a full two hours at that frame rate.

With the GoPro Hero3, the designers and engineers wanted to reduce the form factor while increasing its capabilities. The camera is now about 30% lighter while being able to record in 4k with a 4096×2160 aspect ratio. The housing is now lighter and smaller as well. Though all other accessories and attachments from previous versions will work with the new Hero3, the water housing has been significantly redesigned to help in keeping the weight down and also improving image quality. The new housing combines both above water and below water accurate imaging through designing the lens with the benefits of both a square and flat lenses.

The lens is less curved than before – the new camera lens is a sweet spot between rectilinear and fisheye – so no magnifying of corners or center, which gives the user smooth and wide equalized images; for a great example, see the difference between Hero2 sample movies as compared to Hero3 sample movies. Horizontal field of view is now considered the most important for the best images, according to Newman. The diagonal field of view has been reduced to reduce the fisheye effect, but the horizontal has remained the same to meet a balance of the rectilinear and fish eye lenses. Rectilinear conversion is much easier through ProTune. If the user switches to 2.7k, the image is oversampled and the user can then use an artifacts filter to reduce any fisheye issues and still have a 1080p resolution.

With the lighter form factor, 1080p60, 12MP images, and ProTune firmware, the GoPro Hero3 Black Edition is destined to break into new markets and produce a multitude of new uses for consumers and professionals alike. Additional mounts and accessories like the LCD Touch BacPac, Wi-Fi remote, larger Battery BacPac, Naked Mount, CineForm Studio, and GoPro App, the Hero3 promises to deliver across all ranges of experience. With this new offering from the experts at GoPro, they are breaking down the barriers separating professional video from amateur and developing a whole new segment of users bringing with them new uses and opportunities which we are very excited to see.

Brian Teal is an amateur videographer and participates in various extreme sports.