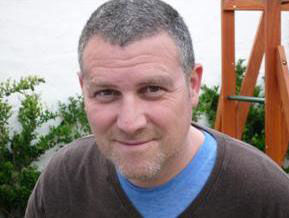 It's not every day you get to visit with someone who's responsible for bringing comic book heroes to life. On a phone call with one of Hollywood's biggest stars you've likely never heard of, Videomaker sat down and talked shopped with Jeffrey Ford, who boasts credentials like Captain America: The First Avenger, One Hour Photo, Public Enemies and, oh yeah, The Avengers on his highlight reel.

Among the topics of discussion with Ford, how he got his start, who he looked up to, and the technology that keeps him leaping tall buildings with just a few keystrokes. Peeling him away from his latest editing project – Ironman 3 – was no small feat. Thankfully, Ford pressed pause on his project and graced Videomaker with a few minutes of his time to talk openly about breaking into the world of blockbuster production.

Transitioning With The Digital Transition

Jeffrey Ford always knew Hollywood would be his professional home. He made it his collegiate home, attending the University of Southern California's acclaimed School of Cinematic Arts. A graduate of the class of 1991, Ford found himself in a unique situation – the paradigm shift from film to non-linear editing of major films.

Since non-linear was a new technology for everyone, not just gumshoe editors, Ford found himself nipping at the heels of Hollywood's elite editors, trying to learn what they learn and absorb as much knowledge as possible.

"I apprenticed under Richard Marks (The Godfather, You've Got Mail, As Good As It Gets), who, in my opinion, is one of the greatest editors to ever live, and he taught himself how to use the non-linear program, Avid. He learned every facet of the program and found a way to integrate it into his films.

"I started out cutting shorts on film, but now I can't imagine life without a program like Avid. It's like trying to play the piano without the piano. You just have to have it."

Ford gives credit to the Avid's versatility as his saving grace in being able to gain the kind of success he's enjoyed throughout his career.

"Working on The Avengers, we've have literally hundreds of thousands of shots and effects and audio you're working with. Avid's data management features are critical in making sure we meet our deadlines. Some shots had four to six different microphones, so being able to find that extra bit of audio, or angle of a shot could have really delayed the process. Avid makes it really easy to control your content."

Not Your Average Project

Ford talked candidly about working on The Avengers. His relationship with director Joss Whedon (Buffy The Vampire Slayer, Serenity, Cabin In The Woods) was based on mutual respect and appreciation for the both the story and the subject.

"Joss is such an amazing director, but I really am a fan of his screenwriting and ability to just tell a story. He's passionate about these Marvel characters and understands that developing each takes time and he found a way to do that in The Avengers.

"The most challenging part of the film came while building the Helicarrier. Each character needed to feature their own unique attributes. Joss did a great job of that, and as the editors (along with co-editor Lisa Lassek), we needed to allow each personality to really breathe. That's one element we're all very proud of.

"Lisa and I actually broke the film in half – I focused mostly on the second half of the movie – because we simply couldn't take on all the elements of editing, host effect reviews daily, and still stay on deadline and budget."

Breaking In Is Easier Than You Think

When asked about getting his start and continuing the earn projects in the ultra-competitive world of blockbuster production, Ford mentioned it's actually quite simple. Treat others with respect and play well with all around you, even if you can't stand them.

"Our world (of post production professionals) is quite close and tight-knit. We all have tremendous respect for the work we're all doing, because we know how hard it is.

"I've never walked into a studio with a resume in hand and begged for work. When I get asked to consider a project, I simply say 'Here are the films I've worked on, here are some folks you can call to ask about my work'. The studio will call the people I collaborated with, and thankfully, I usually get the project.

Editing Is An Extreme Sport

"Working on super hero films doesn't require super human strengths," Ford explained. "But feature film editing is a lot like an extreme sport, it really is. Time is limited, budgets and deadlines get pushed to the limit, and in the last 40 days of a project, you're easily working 14-16 hour days, going on little to no sleep. The push is intense, but everyone works to make sure you're delivering the best."

Ford also feels that being a regular on the Marvel Comics production team comes with its advantages. "They give us a year to turn around a film on our end. That's very little time. But I don't think they'd keep making these films if they weren't successful. Having a team that is working to deliver excellence is what keeps these going."

Ironing Out The Future

When asked about his latest project, Ironman 3, Ford was cautiously encouraging, and gave credit back to the software solution that keeps his team running. "I can't talk about the film, or they'll come and take me away," Ford joked. "It is fun. Every project I get to work on is fun; having a solution like Avid right there to streamline my efficiencies is just great."

Ford did say that the third Ironman film is set to launch in May of 2013. Another summer blockbuster under his belt? That's just par for the course with this super editor.