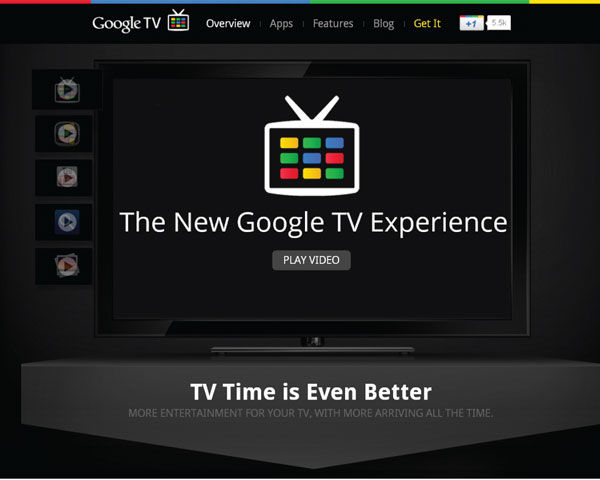 In the beginning there was TV. And the people said it was good. But not great, because there was no way to interact with what was being viewed. TV was passive and did not allow or condone anything other than to sit in front of it and watch. Then along came the Internet. And again the people said it was good, because it did allow interactivity between the user and websites.

Then a wise individual had the idea of combining the two together. But the people were unimpressed because the Internet could not be displayed on the TV with the same clarity as a computer monitor. Time passed with the two remaining apart – until the appearance of Google TV, that is. 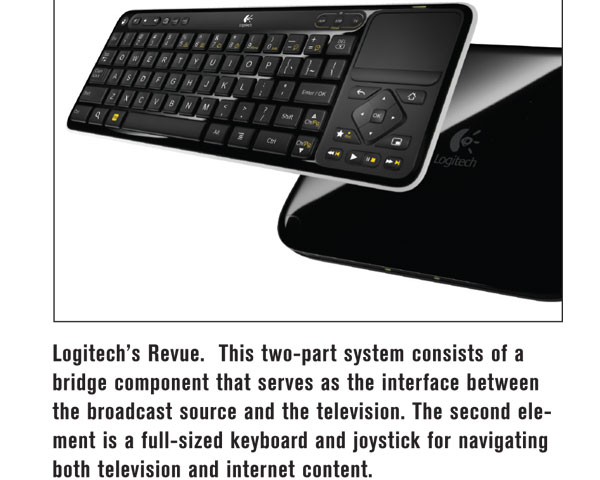 Google TV is a technology created by the search engine giant with the purpose of combining the interactive nature of the Internet with the passivity of television broadcasting. The end result is a hybrid in which both share attributes of the other: both can be viewed on the TV screen at the same time and function independently or in tandem with the other. Google TV’s initial appearance is through the Logitech Revue. The consumer purchases this set-top box; it is neither rented nor subscription-based. The Revue consists of two parts: the first is the unit that bridges the TV broadcast source (i.e. cable box, satellite receiver or HD antenna) and the television. This is necessary since there is no TV tuner in the unit.

Accessing Google TV is done through the second part, which is a full-sized wireless keyboard fitted with buttons and joystick controls for maneuverability through menu screens as well as TV channels. Think of it as a dedicated remote control, if you’d like: one that can “learn” from other remotes as well as control multiple devices that are used along with the TV (for example, a Blu-ray player or an audio amplifier). 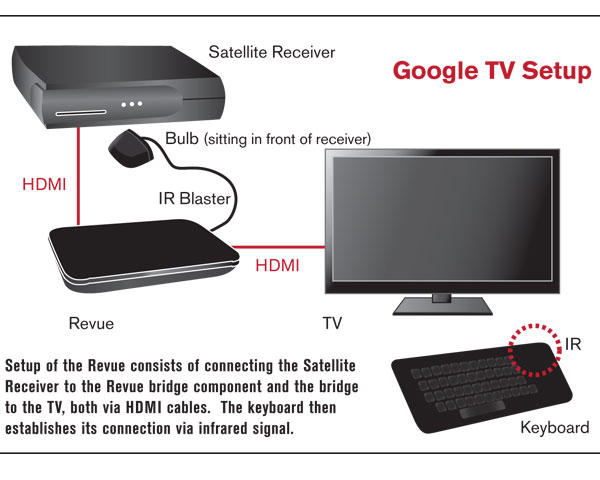 The actual setup is no more complicated than connecting a cable box to a TV. A compatible DISH Network satellite receiver is used instead since it allows Google TV to program recordings and play back the content stored on the receiver’s hard drive. A high-resolution video cable (HDMI) is connected to the receiver’s video output and goes into the HDMI input of the Revue. Another HDMI cable goes out of the Revue and into an HDTV. This factor, by the way, is what differentiates Google TV from other similar systems in the past, being that the TV display can now handle the online content visually in the same manner as a computer monitor. Audio is taken care of by the HDMI cable as well. While the Revue can handle a video signal of up to 1080p (i.e. Full HD), the DISH receiver is limited to 1080i. But for practical purposes this distinction is meaningless since the eye will not see any difference.

The Revue also gives you the choice of wirelessly connecting to your home network or through a wired Ethernet cable. Should you have the option of using a wired connection, you might find it more stable, especially considering that the close proximity of the Revue to the other electronic components could down grade the wireless signal being received. In our tests, an Ethernet cable was used and no dropouts or other interference was encountered. The procedure is to enter information from your home network, such as the password, with the other technical processes automatically handled. (As a side note, a power loss will cause the Revue to reboot, just like with most cable boxes and satellite receivers. An un-interruptible power supply backup will eliminate this as an issue should there be a momentary loss of power.)

The final cable to attach is the IR blaster cord, which controls the video source device. The bulb end of the IR blaster is placed in front of the DISH receiver so that the Revue can be controlled directly without concern that the infrared line of sight will be impeded. Otherwise the keyboard’s IR blaster can be used as the sole IR control.

Turning the Revue on, we were greeted with a message that an update was necessary and we should be patient as the Revue takes care of this automatically. Once it had rebooted, we were ready to go. The menu screens that follow were expected and, in fact, most will find them recognizable immediately as they are fairly intuitive. Buttons on the keyboard handle functions as might be expected, whether TV-based or Internet based (dedicated buttons handle such things as volume and channel selection and recording capabilities as well). Additionally a picture-in-picture format permits viewing television while accessing menus. The Home button on the keyboard will overlay a menu on the TV picture. Menus also include features that are fairly self-evident, such as Bookmarks, Applications, Most Visited, and What’s On.

The easiest way to think of Google TV is that you’re seated on a swivel chair with the TV at your left and a computer monitor to your right. You’re spinning back and forth at such speed that the two blur together and become one. So instead of saying “I’ll go to the computer to check out who that guy in this show is,” you just do it right there and then. This is facilitated by website optimization with an improved view, versus what it would be otherwise. However, in most cases you’ll just go places and see things without any concerns or issues. Except, that is, if a website is blocked as is the case with some. But Google TV needn’t feel singled out as websites are shielding themselves from devices such as iPads and others as well. Still it can be annoying. 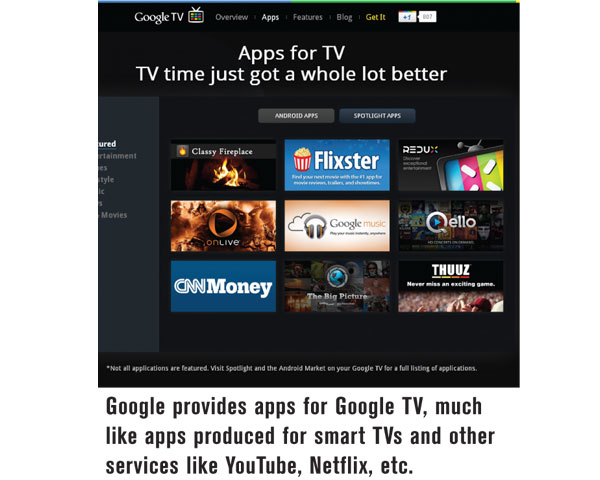 Google provides applications (i.e. apps) to be downloaded and run on a Google TV-enabled device that are similar to those found on some “smart” televisions and other services, for example, YouTube, Netflix, etc. Other apps are to be available from Android stores as well. These Google TV-specific apps are to become more plentiful as time goes by.

Penetration of the Marketplace

If you don’t know someone who has the Logitech Revue, don’t feel left out. Sales of the Revue have been spotty at best. According to unconfirmed reports, Logitech has had an inordinately high number of units returned due to technical issues. Google TV’s perception certainly wasn’t enhanced when Google required that Logitech halt sales of the Revue so as to address these issues just as the all-important 2010 holiday season approached – although Logitech denied this was the case. Logitech did admit, on the record, that sales were not what they expected. Possibly as a result of weak sales, the price was dropped from $249 to $99.

Where TV and Internet Meet

Often called “the last 10 feet” – that final connection getting the Internet on your TV – techies have long hoped for the much anticipated Internet TV experience, but many television viewers still prefer the passive experience. It shouldn’t be assumed that the Internet and television will remain apart forever. Many television sets, as noted above, now feature the ability to download applications. This helps to create the perception among viewers that having the Internet with television is no big deal, and in fact is desirable. Multi-tasking is not so much about doing multiple things all at the same time as it is about being able to “jump” from one application to the other. In the case of Google TV, there needs to be a desire on the part of the consumer to think past it being a “remote control” for the Internet used through the TV, and more of an integration between the information that can be found online as it impacts the content being viewed on the screen. But if this does not come to pass, the courtship of passive television and interactive Internet may be a very long one, with the wedding far off on the horizon.

The concept of integrating a television set with the Internet is far from new, but it is also yet to be successful. Zenith’s WebTV was developed in 1996 but did not gain traction until Microsoft bought it in 1997. The set-top box touted the use of your television as the screen for viewing websites, accessing email and in short doing all the things you would normally do while looking at a computer monitor.

The idea was good, being that you could switch back and forth between the Internet and TV shows at will, and then Microsoft added desirable features such as a TV tuner and hard drive. Unfortunately the idea was too far ahead of the technology: the integration suffered from the lack of resolution that a TV could provide, compared to a monitor, combined with the slow telephone-based connection speed that was all that was available at the time. This left a bad taste in people’s mouths, even after the name was changed to MSN Network and broadband access became the norm (2004/2005).

Today we have HD displays, fast Internet connections and TVs with access to the Internet and the ability to run apps. Some might say that WebTV – the “mission statement” at least – is alive and well since users at home are now connecting online without computers.