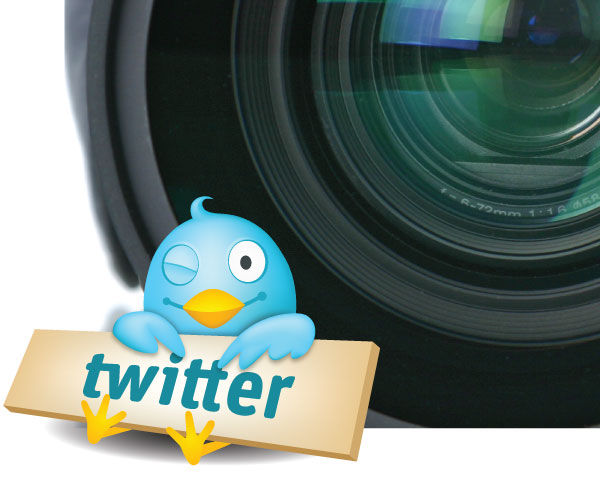 If you keep your message short, you can post it on one of the dozens of new social networking services that have recently sprung up in an effort to get a piece of the sweet micro-blogging pie. All of them do the same thing: allow you to post a message on the internet. However, they stand out from each other by adding features like video sharing, which even the current king of micro-bloggers, Twitter, does not support. Every day a new feature is introduced that changes their functionality faster than a time-lapse video, in an effort to become the one place you choose to share your finest micro-videos. With video sharing and Twitter integration, these video-sharing sites are hoping to gain more exposure and even more new users.

What’s a micro-video you ask? It is a very short video, in much, the same way that Twitter will post very short blog entries, 140 characters only, to be exact. The idea behind very short posts and videos is that anything longer would be boring, especially if your post is on a topic that does not interest anyone but yourself. With short attention spans and multi-tasking being the norm these days, it’s a good idea to keep your messages short. 12seconds, Twitvid, Vidly, Twiddeo, BubbleTweet, these are just a few of the many new video-blogging services that are ready and waiting for your close up, Mr. DeMille, and your fifteen seconds of fame. Let’s talk about a couple of these.

BubbleTweet is the same as the others, but there are a few differences. Although it doesn’t have the bells and whistles that others services have, it has unique features of its own that sets it apart from the other video sharing services. When you create a video tweet on Bubbletweet, you receive a tweet message with a unique URL that you can then tweet out to your followers and friends as you would a normal tweet. When the recipients receive the URL and click on it, they’ll be redirected to a BubbleTweet page where they’ll be able to watch your BubbleTweet video. Why the name BubbleTweet? Because the video you send will play out in Bubbletweet’s very own Bubble video player. When the video ends, the bubble “pops” into thin air. Unlike the video tweets from other services, BubbleTweets are not “embedded” into your live Twitter page. You actually need to click on your unique BubbleTweet URL in order to see your video tweet play. A BubbleTweet can be up to 30 seconds long. 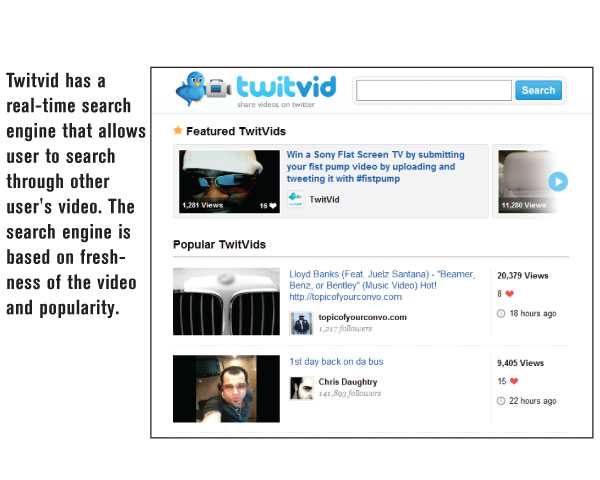 Twitvid and Vidly are just two video sharing services with more high-end features. Vidly boasts a real-time feed that displays what everyone is watching at the moment. They also have a more sophisticated video player that is interactive. But the most important feature that Vidly has to offer is its support of full 720p HD video. The addition of HD support can make Twitter a real promotional venue for filmmakers, giving it the potential to promote high-quality videos. It is not inconceivable that in the not too distant future we will see movies and videos from the original filmmakers on Twitter.

The Twitter video phenomenon has become so popular, that other companies are looking for ways to jump in on the moneymaking bandwagon. This includes the manufacturers of camcorders. Right now, the most popular camcorder for Twitter video aficionados is the Flip Video, a low-cost pocket-sized camcorder from Pure Digital, and its successor, the Flip Ultra, comes with software built into the camera that lets you edit and upload your videos immediately to any of these video sharing sites. But, perhaps, the most important feature here is that these cameras now record 720p HD video, making them perfect for uploading hi-def videos to the video sharing services that now support HD. 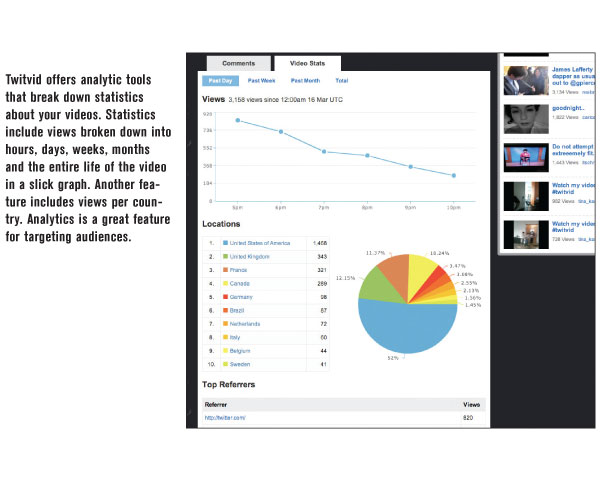 Both Vidly and Twitvid support high-definition video and real-time feeds, and both claim to have celebrity followers, like Britney Spears and the NBA. Vidly will let you upload 1GB of video, with a maximum video length of 20 minutes, whereas Twitvid will upload a whopping 2GB of video. Twitvid is simple, yet it has a real-time search function, making it possible for you to search for relevant videos both on TwitVid and YouTube. They have an analytics service that can tell when people were viewing videos, where these viewers are from, and which other sites are top-referrers. This is valuable information for professional filmmakers.

With that said, it is unlikely that professional filmmakers will use any of these video tweeting services as a vehicle for distribution of their film. More than likely, a pro will be more inclined to showcase his or her video on the more professional video sites, such as Youtube, Viddler or Vimeo. These non-social video sharing sites are the main go-to sites for professionals. At the very least, a professional video creator will use Twitter to post a link to the site where his video is, so those who are interested can watch.

12 seconds, Twitvid, Vidly, BubbleTweet, Twiddeo are just a handful of the many video sharing sites integrated with Twitter. These sites are constantly upgrading their services and many more new sites start up every day, each with new features of their own. If tweeting videos is your thing, you will have no trouble deciding which video tweeting service to choose.

Of course, if you’d rather let your fingers do the talking, you can always opt to keep on answering that ol’ proverbial question, “What are you doing?” the old fashioned way – with words, and only 140 characters at a time, please.

Tweeting Up To the Minute News

The Videomaker Editorial staff worked some long hours reporting on and reviewing the latest greatest gadgets revealed at CES this year. One thing that we noticed, though, was the number of bloggers and tweeters doing the same thing, and they were doing it instantly. We were in the Grand Ballroom when Panasonic announced its biggest secret: a new 3D camcorder geared towards the consumer market (meaning it cost “only” $21,000, rather than $200,000). Sitting next to us was a blogger taking video with a Flip camera during the press conference. Throughout the announcement, he continued to shoot short one-minute segments, uploaded them to his blog, wrote a quick tweet and posted a link to the blog’s video. The Videomaker editors were also tweeting the news, and before that conference was over, we recorded hundreds of retweets about our announcements, so we can imagine this video tweeter had similar results. The power of video and tweeting is strong. At one point, one of our staff members looked over at this blogger-tweeter’s laptop screen as he wrote, “Matt York of Videomaker got a private preview of the camera yesterday,” and then he posted it. How cool is that!?