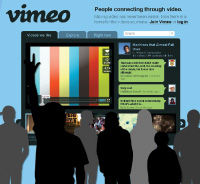 A blog is simply a web log, or diary, that one shares with others. But when users were finally able to add video to these blogs, a viral phenomenon was born.

People watched more than 10 billion videos online last year. Shouldn’t some of those people be watching your stuff?

Thanks to the internet, audiences for video have skyrocketed. As a video producer, you can nurture your own audience for business or pleasure or both. Introducing lots of people to your videos has never been easier, too. We’ll look at Social Networking tools (did you know that 40% of MySpace visitors are over 35?) and good ol’ local connections to jumpstart your viewership. So, if you’re excited about sharing your stories with more than the family (think thousands or even millions of viewers), then read on to find out the best ways to build an audience online.

With all the future effort you’ll be putting into building your audience, you ought to make sure that you showcase your best videos. The saying goes, “Content is king,” and it holds true for building an audience on the web. Make sure your video grabs the viewers’ attention; if you simply pull five minutes out of your 56-minute documentary and post it on the web, chances are that your viewers will not have enough information to be engaged. Instead, create a unique video like a teaser to spark interest. Web video traditions, like abundant use of the closeup shot (CU) and the static locked-down shot are still here, but better online video compression and larger video windows could change this. With Vimeo and YouTube offering high-resolution widescreen video, you can engage your viewers with detailed moving images.

For more info on video compression, be sure to check out earlier Videomaker Distribution articles, Compressing the Goods, January 2008, and Stellar Video, Just Smaller, December 2008. Building an audience is difficult if your audience isn’t interested in your video.

Where to Push It: Online Networks

To build your audience, you need to really put your video out there. This means more than starting a website with your videos available on it. Remember, we’re building an audience, not selling DVDs just yet. NewTeeVee Editor Liz Gannes says of web video content, “Just put it everywhere!” In this case, “everywhere” means on other peoples’ websites, or off-domain. Uploading your video to video-sharing sites is off-domain. So are online user forums. And online social networks. In fact, linking your video from within online user forums is a great way to utilize off-domain sites.

Another great way is to start your own blog and embed your video inside it. We’ll touch more on this in a minute. To be sure, the idea is to “push” out your video to the mass of online video viewers, before pulling your audience back to your video-streamin’, DVD-sellin’, T-shirts-in-all-colors-dealin’ website. Yes, in conjunction with off-domain sites, having video on-domain is important in building an audience as well. It’s just less so. On-domain video is most useful after your audience begins to build and starts visiting your website from afar. Consider keeping some unique content on-domain as an extra bonus for those who visit. You can start by uploading your high-quality video to a video-sharing site like YouTube and Vimeo. Add keywords to your video that are relevant only to your content. Then take three elements from your video to base your audience from. For instance, a video about a fly fisherman on the Deschutes River may lend itself toward communities around fishing, the State of Oregon and fishermen’s personal stories. Find off-domain places like forums that deal with the specific topic of your video. Find forums that deal with the geographic region or town, and become a member. Start contributing in a positive way on the subjects you know about, and include a link to your video. You should also find people who are blogging about the topics or subjects present in your video. Use them to understand the topic and create links with them. Blogger and WordPress are established blog platforms. Your audience will be coming in from the social networks you join, like MySpace and Facebook. Remember, these websites aren’t just for teenagers popping up party photos; the sites are populated with people of all ages, from all over the world. About a third of Facebook users are over 35 years old, and the number of users making $100,000 or more is creeping toward 25%. MySpace posts similar numbers. Web analysis company comScore released data that shows that, in the month the story was written, YouTube got 37.8% of its 344,000,000 visitors from Europe. So don’t be surprised if your video attracts viewers in foreign countries.

Where to Push It: Local Tools

On the local community front, making business cards, attending media mixers and joining Meetup groups are great ways to build an audience. If you’d like to make business cards that appear video-driven and less serious, consider a card company called Moo. They allow you to make business cards from your photos or video frames. The Flickr account we made for posting our production stills has a special deal with Moo, too. For standard eggshell and executive white card stock, a quick Google search tells us we have a myriad of options.

As for getting personal at a media mixer event, Media Bistro is a good place to start. The Media Bistro company is now a national event company, which organizes attendees online.

We attended a local Media Bistro event to check it out for ourselves and found a pleasing turnout: a few dozen people willing to be chatty. Journalists, writers, producers, photogs and videographers gathered at an upscale brewpub to discuss all things important. Freelancers, new CEOs and startup employees were all conversing and handing out business cards.

Video production meetups on Meetup.com are fairly common. These are similar to the Media Bistro events, but they seem to be more formal, sit-down-and-meet events for enthusiasts. If there isn’t a Meetup in your town, you can start one for a small fee. Try starting a group, one that showcases others’ videos along with your own.

Building an audience online is less daunting when you have a plan. Start small, with a good video. Then build and build and build, using free social networking tools. Remember to include everyone who has been involved in your video project. Think of at least three elements of your video that have communities online. Looking outside of the video and film production communities will bring in new audiences. Even if all of your work adds up to receiving just .0001 percent of YouTube’s views this month, you’ll have built an audience of 34,000 people.

Contributing editor Andrew Burke has worked in all areas of video production on three continents.