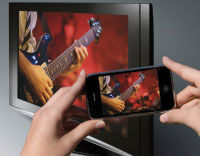 With so many potential targets for delivering your video, it becomes rather exhausting to plan how many different types of video formats to export from your timeline.

One of the most important considerations you’ll be making in the process of deciding how many formats to export is the screen size, otherwise known as the video resolution. The resolution of the video determines how much visual information you will show to your viewer. Proper planning in pre-visualization and post-production will guarantee that, no matter what the resolution is, your video will be an enjoyable view into the world you’ve created on screen.

As with most things in video production, the more you plan before shooting, the better the end result will be. This is also true with video-resolution considerations. So ask yourself before starting your next project, where do you plan to show your video? What’s your aim? Feel free to think big. Sure, we’d all like to have our next feature at cineplexes across the nation. The good news is that’s possible if you plan accordingly. The trick is to find where you’re showing your work, know what resolution that is and plan on shooting at that resolution, or, ideally, shooting at a higher resolution. The professionals call this your acquisition format and, as a general rule, you should always be acquiring your shots at a higher resolution than the deliverable formats. This additional resolution gives you some flexibility in post-production and insures that you won’t sacrifice the visual quality of your production.

For example, let’s say we’re producing a viral video that will only show online in a standard 4:3 format at a video resolution of 320 pixels by 240 pixels. Following the rule, we know that we should be acquiring the footage at a higher resolution. So, a standard-definition DV camcorder video (720 pixels by 480 pixels) will suffice. The additional resolution gives us some flexibility that could help us mitigate potential problems. Let’s say that the boom mic is dipping into one of our good takes. Unfortunately, we didn’t catch this on location when we were shooting. With the additional resolution, we can crop in on the shot to remove this distraction without completely deteriorating the quality when we export for the lower resolution.

If you’re thinking ahead, you are now realizing just how powerful it is to shoot with an HD camcorder. It’s true that shooting in HD will give you much more leeway in delivering different resolutions. Additionally, if you are still dreaming about that theatrical distribution, remember that you can transfer HD video to film. Although it doesn’t follow the acquisition format rule perfectly, HD resolution is good enough to work on film in a convincing manner. That means it’s difficult to tell the difference between what you shot on film and what you shot in HD video and transferred to film.

The next pre-viz consideration we’ll be making is a derivative of the emergence of HD video. When HD acquisition started for production companies, there was the dilemma of acquiring widescreen video (16:9) for delivery to standard-format televisions (4:3). There are two solutions. The first solution is a process called protecting for 4:3, where the director of photography makes sure all the key actions happen within the 4:3 area inside the 16:9 frame. When you deliver the video as full-frame 4:3 format, you crop out the sides, and all the critical visual information remains. The other solution is to deliver a letterbox version of the video, which has black horizontal bars at the top and bottom of the frame, thereby preserving the original 16:9 format within the 4:3 display device. The good news is that 16:9 display devices are becoming the norm and, at some point in the near future, 4:3 will be dead.

The last pre-viz consideration we’ll be making is deciding whether or not our core demographic will be viewing a lower resolution of this video or a higher-resolution video, and then composing our shots to meet these video-resolution conditions. We’ll draw the line and say that a project with the primary deliverable format at a video resolution below DV standard-definition video (720 pixels by 480 pixels) is intended for a lower-resolution display device (e.g., YouTube, Apple iPhone, Sony PSP, etc.). As such, we recommend you compose your shots more tightly than normal and get the viewer closer to the action. This means using wide-angle shots sparingly or possibly replacing them with tighter shots that pan or tilt to reveal the entire location or object. The problem with lower-resolution display devices is that you lose a great deal of visual information simply because of the limits of the frame size. This also affects titles and graphics. Make sure text on screen is a little larger than you normally would make it. Making the best use of the screen size, when the actual screen is pretty small, is the art of the filmmaker who’s aware of the potential gains of mobile and online video applications.

Exporting to a Whatchamacallit

After editing your video to its final version, the last step is exporting it to the desired format(s). Ideally, this process is quite simple; however, there is plenty of potential for technical nightmares to start popping up where we least expect them. Even the most experienced producers can’t deny the existence of a witching hour that occurs as soon as you send your project to DVD, or YouTube, or an iPhone or a Whatchamacallit. The process of compressing your video from its acquisition format to the desired deliverable format is called transcoding. Transcoding video incorporates a vast array of changes to the video and audio data that can have one or many hiccups along the way. Thankfully, there are ways to make the process simple.

Most, if not all, video editing applications include transcoding tools. The more professional applications have more features and flexibility. But in all cases, we highly recommend you use the presets when appropriate. It’s very common that you can find a preset for popular devices, such as the iPhone, iPod, PSP and other mobile devices. Additionally, there are usually presets for common deliverable media, such as DVD, Blu-ray Disc, MP3, Podcast formats, web video and others. Use the presets when possible. It takes the guesswork out of the process and sets the video resolution to the specific standards of the device or medium. When a preset is not available, you’ll have to cook up your own. It’s not uncommon to find the format specifications in user forums, if not directly from the white pages on the manufacturer’s website. Enter these customized settings and, if possible, save them as a new preset. Most importantly, always test your video on the devices to make sure they indeed work properly. Finally, look at the video resolution, and take notice of any understated visuals that are caused by the reduced resolution. You can learn a lot from your mistakes.

Our last recommendation in the transcoding phase is for producers who will be exporting a great number of different formats frequently. We suggest you have a transcoder that has a render queue. With a render queue (sometimes called batch rendering), you can line up all the different formats and set your computer to render them together. It’s not an uncommon practice to set up your render queue at the end of the day and let your computer work overnight, putting freshly-compressed video on your desk the following morning.

From the silver screen to the mobile phone, proper planning to make the best use of the screen size will yield better experiences for your audience. When you’re dealing with video resolution, you are creating a window into your world – make sure it’s what you want everyone to see.