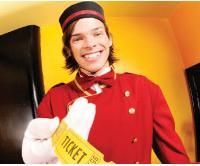 Getting your hard work shown on a big screen is a dream of many video producers, but it really can be done. The name of the technique in question: four-walling.

The other day I got an e-mail from a long-ago film student of mine. It was an invitation to the premiere screening of Holy Cow – the sequel to his comedy short about two inept security guards. The viral blurb went like this: “Outfitted with a two-man cow costume and more enthusiasm than brains, the perilous pair stake out a farmer’s field to apprehend a group of elusive cattle-thieves.” A colorful poster attachment announced three consecutive screenings at a local pub. Admission was free, but the beer was not.

Although this was a contemporary and snappy DIY movie marketing campaign, I was struck by the throwback of this invitation to the pioneer days of motion pictures, before there were theatres to show them. The road-show era of film exhibition was a time when itinerant showmen bought the films outright, took them on tour and screened them wherever they could mount a projector and a white sheet – in fairground tents, department stores, opera houses, museums, churches – and yes, even in saloons.

More than a century later, finding an audience continues to be the engine that drives moviemaking in all its forms.

Blockbuster marketing machinery aimed at bringing audiences to the big screen is the distribution turf where the big boys play. But there are more and more examples of DIY filmmakers finding captive audiences and the requisite four walls it takes to mount and show their films.

Four-walling simply means you find a theatre, rent it and show your movie. Depending on the deal, you will likely pocket the receipts and the theatre will keep the concessions.

A filmmaker might resort to four-walling because the film needs to score some reviews in order to qualify for the Academy Awards or because a movie deal with a broadcaster is contingent on the film’s prior theatrical release.

Or, it could be that exhibitors find the film a risky investment because they’re afraid nobody will come to see it, and the filmmaker turns to releasing it himself. This is exactly what Tom Laughlin did with Billy Jack, the 1971 box-office phenomenon. Laughlin wrote, directed, produced and starred in the cult classic about a soft-spoken loner who explodes into a one-man fighting machine when he sees injustices perpetrated on the helpless and downtrodden. Laughlin was unhappy with the way Warner Brothers handled the release of his anti-war opus, so he promoted it himself and rented theatres all across the country. The $32.5 million it earned put Billy Jack in the Top 100-grossing pictures of all time. Before Billy Jack and its 1974 self-released sequel, The Trial of Billy Jack, the tried and true approach to finding an audience for a new release was to hold test screenings in select theatres, usually in a single region or market. After Laughlin turned Hollywood’s marketing and distribution model inside out, the studios followed suit by releasing new movies in thousands of theatres on the same day in markets all across the country.

Laughlin is remembered as a self-distribution pioneer and risk-taker who was ahead of his time when he thumbed his nose at the powerful studios. The four-walling success story of Billy Jack is now ancient movie history, but, more than thirty years later, do-it-yourselfers are no longer debating whether it’s a good idea to find your own screens for your movie.

It’s no secret: The DIY filmmaking crowd is adopting the same kind of thinking that goes on in the world of indie rock, where artists have realized that, by controlling all aspects of their work, they no longer need to rely on a major-label recording deal to make a living from their music. Using a web presence, they are taking charge of their own concert promotions, taking their music on the road and selling their CDs, not only in the lobby, but also online.

And that’s what one do-it-yourself filmmaker did with her labor of love – find an audience by taking it on the road.

The banner headline on the film’s website reads: “BRATS: Our Journey Home, a Donna Musil film featuring narration and music by Kris Kristofferson.” For writer/director Musil, the journey was a seven-year filmmaking odyssey fueled by relentless passion. Being passionate about the subject matter is what kick-started this feature-length documentary about “growing up military,” and being relentless is what ultimately got the film made, financed and delivered to an audience.

After film-funding agencies and broadcasters had raved about the project and made promises when Musil first pitched it to them, they failed to come through with funding. Undeterred, Musil dug deep into her own pockets and began shooting. An Army brat herself, she set up a website for the project and connected with her subjects by e-mailing brat groups everywhere. Response was overwhelming, and Musil spent two years collecting interview material, including talking heads of celebrity brats like Norman Schwarzkopf, Robert Duval and Kris Kristofferson.

Worried about money going out and not coming in, Musil set up an educational non-profit corporation, Brats without Borders. Donations ranging from $1 to $1000 poured in from the military community. Offers of B roll included brats’ 8mm home movies and stock footage from military archives, broadcasters and even Disney.

Brat collaborators, advisors and crew came on board as well, either working for a fraction of their day rates or waiving their fees altogether (as did Kristofferson). Military brat and Hollywood veteran Timothy Wurtz offered his services as co-producer. He says it was the “concept-testing” mentality and limited vision of potential funding partners that ultimately propelled Musil and company towards taking BRATS on a four-walling road trip.

“They told us appeal for the movie was going to be limited. But they weren’t thinking about its built-in market – the fifteen million American military brats all over the world,” said Wurtz.

The documentary managed to gain entry into small festivals, but it wasn’t reaching that built-in audience. Tired of Thursday afternoon festival screenings in venues where few people showed and nobody cared, Musil and her band of collaborators took BRATS on the road. First they built an e-mail database to book venues on military bases and organized their first tour to the 26 communities where the largest contingent of military brats lived. They hired a publicist to generate a buzz about the BRATS road show in the national press, while Wurtz himself contacted the regional media, often creating local headlines announcing that BRATS: Our Journey Home was “coming to a theatre very near you.”

At every stop, BRATS played to packed halls, churches and theatres. Sometimes as many as four hundred exhilarated military personnel and their families turned out to watch their own stories unfold on the screen.

BRATS sales aren’t of Billy Jack proportions, but they are impressive. The screenings are usually free or sometimes $5 to help pay for the venue rental, but after every show ten to fifty percent of the audience buys the DVD at $24.95 each.

At last count BRATS’ marketing numbers look something like this:

While Wurtz is selling BRATS DVDs in the lobby, Musil is usually up on stage handling what often turns out to be an emotional Q & A session for both filmmaker and audience. The fledgling documentary maker admits the journey has been life-changing, and that the making and subsequent four-walling of BRATS has indeed brought her home. In a telephone interview from Denver, she reflected on the experience: “I will no longer say I’m going to make a film because I think it will do well. I want to make films that tell stories about which I am passionate.”

Just like the itinerant movie showmen of yesteryear, Musil and Wurtz keep on rolling, bringing their road show to audiences in venues from Helen, GA, to San Diego, CA, and beyond. Through their non-profit corporation, they are planning to produce educational sequels and DVD companions.

Before the Curtain Goes Up

Ryan Bruce Levey is president of international distributor, Vagrant Films Releasing, in Toronto. When asked in a telephone interview about do-it-yourselfers finding screens for their films, Levey waxed nostalgically but respectfully about movie shlockmeister William Castle. The renegade producer from the 1950s used promotional gimmicks such as “fright insurance” policies and flying inflatable skeletons to pull audiences into his B-movie horror flicks. Hokey? Yes. But Castle knew his audience.

Levey claims he knows within about thirty minutes into a film who the audience is, “and if there’s an angle, I can usually see a marketing plan unfolding.”

What makes a film worthy of a sales campaign? “A worthy film challenges you; it makes you think,” says Levey. “So, make the film you want, but sell it.”

His advice to DIY filmmakers goes something like this: Don’t make a theatrical release the only prong of your sales strategy, but rather integrate finding a screen for your movie into other marketing activities. For starters, make sure you get your film reviewed and start a viral campaign.

“It’s all one big sales thing,” says Levey. “Be prepared for unreturned phone calls and chasing down reviewers and bookers who tell you I lost the DVD.'”
But, when you score your four walls, he urges, “You’ve got to make it an event.”

Peter Biesterfeld is a documentary maker, freelance writer and professor of Documentary Production.