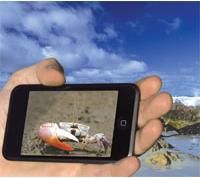 Tiny viewers are everywhere, allowing you to show a video from the palm of your hand. Learn how to creatively shrink movies and launch your career the micro way.

There’s nothing better than a private screening room, but how about one no bigger than a soap bar, on a 3-minute timer? Current mobile devices can carry a huge store of video and are becoming clearer and easier to use. Smaller screens aren’t just for kids anymore – everyone’s using them. Here are a few tips to help you jump onto the tiny-viewer bandwagon.

A Mobile Pitch Gets the Greenlight

At a recent seminar, where world leaders in wildlife filmmaking gather annually to share tricks of the trade and hobnob with distributors and broadcasters, a young videographer didn’t realize that he was about to get his break. As they shared exotic tales from the field – about state-of-the-art camera equipment, horrific shooting conditions and beautiful results – he sank into his chair. He had spent hours taping fiddler crabs on the Monterey Peninsula and had nothing to compare to these successful pros. But he won the day and his project was greenlighted, all through the simple tool he held in his hand: a video iPod that caught his audience with perfect timing.

There were two ingredients that brought this aspiring videographer into the limelight that day: insight into the untapped market for innovative mobile device videos and creativity. He knew what played best when his idea literally balanced on his audience’s knee.

For video producers, the tremendous benefits of portable video technology can’t be overstated. Cell phones now stream your projects from mobile web browsers or store downloaded clips on standalone applications, and mini video players are the norm in most PDAs. But, as with any small tool, you’ve got to know the limits. In the same way that a paring knife can still do big jobs if you know what you’re doing, you can successfully use many of the tried-and-true shooting and editing skills on the small screen. But some great video techniques are lost on portables, and using them can ruin your video career like a dull knife cuts a fool’s hand.

History of a Small Revolution

Over 16 years ago, the PDA, or portable digital assistant, morphed spiral notebooks into a computer pad, and, among other things, replaced that dog-eared address book with a shiny screen half the size of a Wheaties box. A typical PDA today is a Swiss Army version of a computer-entertainment center.

You already know about the phone, camera and nifty global compass. You thumb-board your way to music, news, e-mail and TV programs, using IrDA, Bluetooth or Wi-Fi. The latest advances this season include a memory card slot on one phone with up to 8GB of data storage. While phone carriers offer streaming video services that are part of a closed system, some third-party video streaming services are linking to phones compatible with their own video stream. It’s a revolution that brings your video to niche markets, playing on screens that are open 24/7.

Coupled with web-based virtual video galleries, the potential sale of your work is mind-boggling. With the release of the Apple iPhone in mid-2007, ultimately 115 million smartphones were sold worldwide. Cell phone sales jumped almost 14 percent in developing markets in early 2008, and this year people are buying almost as many smartphones as laptops.

Eye of a Fiddler Crab

When people are interested in a story, they’ll do anything to get it. Almost 300 years ago, readers sported monocles on a string to read tiny print. The arrival of a 2-inch transistor television in 1959 seemed like a sure winner, but it didn’t catch on. Why? For reasons arguably simpler than competition from big movie houses: miniature screens lose detail and thus demand new editing choices.

The videographer on the Monterey Peninsula astutely turned his lens from the ocean vista to the viewpoint of a fiddler crab. His idea was that a crustacean sees in closeups, extreme closeups and medium shots. The cellphone screen is a perfect analogy to a fiddler crab’s looking glass.

For mobile devices, you will be shooting tight. Be careful to lock your camera on a tripod or arrange a makeshift support. Camera moves, if necessary, should be steady and reveal strong compositions. Tilts, pans and dolly shots work only if they’re short.

Keep subjects close, but use wide angles sparingly for variety. Wide shots will be abstract, but when you compose with accents of color, texture, line or blocks of negative space, they can be intriguing. Remember what all great filmmaking does: it leads the viewer, presents puzzles and reveals meaning.

Technically, the basics of video shooting remain the same – among them: adjust white balance prior to recording and avoid back light and low light. Heed the warning that video still doesn’t handle extremes in contrast well, so limit brightest and darkest areas in the frame, and avoid automatic camera exposure controls if your camera allows.

The greenlighted filmmaker started his project knowing viewers weren’t going to sit at a small screen for long, so he edited with powerful cuts. He looked for accents while shooting – the waving green moss on the river rocks, the black channels of water through the golden sand. He observed that video transitions digitize poorly and subtitles are lost. He relied entirely on complementary compositions between direct cuts, and his incoming and outgoing images enticed the viewer’s eye to make the jump.

When cutting for mobile video, always go for bright-colored, moving, varied shots. Put your mic close to sound sources, and get clear, well-modulated audio. Direct characters to move, and, if possible, put them against active backgrounds. Use their best thoughts as voiceover, and avoid boring talking heads. Record sound effects that will give your video a three-dimensional reality. For screenings, use high-quality headphones that block outside room noise and let the audience sink into the show.

For the first time in history, movies that are made by anyone are available to just about everyone. What stands between a seed idea and a great video? You must know your primary motive. Why are you making the movie in the first place?

Historically, the critical component of a successful movie, no matter how small or how short, is that it entertains. What you love is contagious. The commercial, practical, sentimental or social purposes behind your idea are secondary to discovering a topic that excites you. If it’s good, there are countless ways that your mobile video will be sought out by entrepreneurs, advocacy groups, educational organizations, friends and families.

The Monterey Peninsula video producer documented a topic he cared about, knowing his insights would infect others. For you, that may be a favorite restaurant, a local park or a wild river. Research who might benefit from the video, and show it to business owners and enthusiast clubs. Plan ahead, to be in the right place to share your video with the right people, like the fiddler crab guy did. He’s now working with local environmental groups to link his video to their websites, with a small title that advertises his own website. It can happen to you, especially if your first motive is a passion for the topic.

Start with small ideas. For civic groups, document the tricks of a successful fundraiser; for friends, how to open the cabin for the season; for family, unmask a secret recipe. Through familiarizing yourself with small-screen shooting and editing skills, they’ll become second nature.

Now save your project to your PDA virtual notebook or upload it to gallery websites. Consider whether your story needs more than three minutes, and break it into segments. If you create a promo, it can point the way to a galaxy of outlets.

The technology is available, from worldwide access to sites like metacafe.com to selling your DVD through online distributors like createspace.com. All you initially need is desire. And maybe the perspectives of a fiddler crab to help you get the footage you need.

Jeanne Rawlings is an Emmy Award-winning sound recordist and documentary producer. Her clients have included the National Geographic Society, ABC and Discovery Channel.