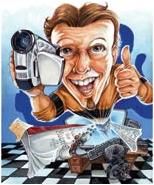 From home movies to Hollywood blockbusters, your broadband Internet connection is prepared to deliver video.

I thought I was pretty clever back in 1999 when my sister and I used to send video-letters from one side of the country to the other. The novelty really hasn't worn off.

There's something quite intimate and satisfying about seeing moving images of your friends and family, their homes, their lives: it's a great way to stay connected when distance intervenes in a way left ultimately unsatisfied by letters and even still photographs. What did wear quickly on me was putting videotapes in envelopes and mailing them. And, inevitably, someone would want a copy of something, and thus begins the endless petitioning for the return of the little-league tape.

There is nothing like a good idea whose time has come, and in this case, there is little as splendid as video distribution over broadband. Companies such as Neptune Media Share and Digital Silo will allow you to very easily upload your videos to a central location and even send group email to your family and friends inviting them to watch. Gone are the padded mailers, lost tapes, bad dubs, trips to the post office. And at the other end of the spectrum, CinemaNow and Movieflix will deliver Hollywood hits and indie video over your DSL or cable modem.

Companies like Neptune.com and digitalsilo.com are looking to carve a market out of the ten million Americans who currently possess both a camcorder and a broadband connection by helping them share their home movies.

"We believe personal content will eventually outpace Hollywood content. — at least for download," says James Tippets, Vice President of Neptune MediaShare. As you would expect, Tippets is very enthusiastic about using the Internet to enable people to share home movies. The Internet technologies which perform the best, he is quick to point out, are the ones which, rather than looking for something brand new, are ones which provide new solutions to old problems. Email, for example. Email became the most important application the Internet had to offer because it solved the old problem of getting letters from one place to the other — more reliable than the Pony Express, faster than a mail ship, more convenient than licking stamps, and far more efficient than a two-day delivery between Philadelphia and Washington D.C.

eBay is another prime example. Only the Internet allows the creation of the world's largest auction house. You just can't cram all those people and all that junk into any location. Tippets and his colleagues discovered another age-old problem and realized that they could use the Internet to provide an elegant solution.

"Sharing your home movies has always been a very painful process," Tippets points out. “Dad would take down the old camcorder and if you're lucky you'd see them twice in your life time–not like photos. You can get extra prints, you can share, but for video or home movies, they basically went into the closet where you never saw them. Even now, you can get them on your PC, you can do editing, but still you have that big video sitting on your hard drive. You're still required to burn a DVD or make a tape, and you're still going to the post office. If you use online sharing with your broadband connection, you can upload that trip to Hawaii, and within minutes get a response from your family. It's a way of sharing that solves a very old problem."

Neptune is very easy to use. I was able to upload and share a video in minutes by doing little more than clicking the "next" button and making some simple choices. When the video was uploaded, it guided me through sending out an announcement to people inviting them to see it.

Not only can you now watch the exciting back-and-forth of your nephew's chess tournament, but you can watch full-length feature films over your broadband connection as well.

For an enticing $9.95 a month a membership to CinemaNOW lets you watch an unlimited number of films from their library of 4500 titles. Movieflix, with significantly lower resolution, has a similar deal for $6.95 a month. A free membership there gives you access to quite a large number of films, from vintage grade B Hollywood (I must admit, I had a good time watching the eminently forgettable 1949 horror flick "Fog Island" in a Real Player window while writing this), to a selection of Hollywood concept trailers and indie shorts so vast that it's like hanging out in a Los Angeles coffee shop where every waiter and cab driver is handing you their reel.

"I'm fundamentally lazy," says Bruce Eisen, Executive Vice President of Cinema-Now. "I come home after work, finish eating at 8:19 and I want to watch a movie, I don't want to wait till 9:00 for something to come on Pay Per View, and I really don't feel like getting back in the car and schlepping over to the video store and back, and then having to remember to return it the next day."

Neither Movieflix nor CinemaNow yet has the selection of a brick and mortar store such as Blockbuster but it does boast the convenience of never having to leave your home, and does so at a price either comparable to or less than that of by-mail DVD services like Netflix. All of them also have free trials.

While you might be pleasantly shocked at the quality you can get from CinemaNow with only a few minutes of buffering, curling up in front of the computer with your girlfriend and a bowl of popcorn isn't the most comfortable way to watch a movie. That will no doubt change in the near future as A/V clients become more popular and available. These devices, such as Microsoft's Media Center Extender will allow you to divert content from your computer to your television and watch movies there. And if that's not in your future, many new computers shipping today have audio and video outputs which will allow you to connect them directly to your television.

I went to college with a guy named Lou Pecsi who was constantly making low budget feature films. Every six months or so I'd run into him at the mall or on the street between classes and he'd tell me how his current project was going and he'd show me a bunch of still photos of our classmates dressed up like zombies and I was always very excited to see him and hear about his projects. I never saw any of his movies because he'd screen them twice a year in someone's living room or in the New Haven film festival and they'd never get distribution. Video over broadband is a dream-come-true for producers like Lou and audiences like me.

Unlike cable or broadcast TV companies, it's very easy for companies like CinemaNow to take risks on films. While pay-per-view may have 50 or 100 titles they can show, it requires very little effort for CinemaNow to add an obscure documentary which might otherwise be overlooked. There's no risk for on-line companies, disk space is cheap, they don't need to order ten thousand copies of a DVD and hope it will make it's purchase price back and also, there's no risk to the viewer. Eisen explains: "Since it's a flat fee, you can watch five minutes of a movie, decide you don't like it, and watch another one, you can jump all around." This will turn into a real boon for Indie videographers sitting on top of a movie that may never get mainstream distribution.

The problem of media distribution is as old as writing or even cave painting. When I was growing up, The Wizard of Oz came on TV once a year. It was a big deal. My sister and I got to stay up late, wearing our pajamas, after days of anticipation. Cable and video stores have changed much of this in the past several decades, recent hits can be found on pay-per-view or premium channels like HBO or Cinemax, video rental stores changed it even more – now I can watch The Wizard of Oz almost any time I want, as long as the store is open. Video over broadband is taking away another step in that process. It allows people to share video, such as home movies, with very limited audiences.

The Internet's ability to send unlimited streams of digital media anywhere on demand is a potent solution to a longstanding problem. It has enabled everyone to become a publisher. The consumer can now control the content. It's now easier to share video over the Internet than it ever has been and, as media clients become more prevalent, the experience of watching movies sent over the Internet will only become better. Definitely an idea whose time has come.

Kyle Cassidy is a video artist and network engineer and co-author of Enterprise Internetworking and Security.

Zombies get on Board

As this article was nearing publication, a funny thing happened. I ran into Lou Pecsi who was doing some zombie makeup for a festival performance. I hadn't seen him in fifteen years, but true to form, he was carrying around a plastic bag filled with still photos and video cassettes of the movies he was working on. Excited that I may finally be able to see some of his work, I gave him the submission information for CinemaNow and MovieFlix. Just like I'm doing for you.

Send a VHS or DVD screener (which won't be returned) to:

Be sure to include your contact info, they'll let you know within two weeks. If you have any questions beforehand, you can email Eric B. Stein at erics@cinemanow.com.

Movieflix currently accepts only VHS screeners (which nonetheless will not be returned).

Send a copy to:

Include a signed copy of the form you'll find here:

Now I'll be looking for all of you online!