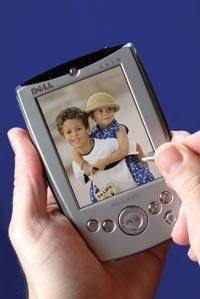 Just as computers revolutionized work and play, Personal Digital Assistants (also known as PDAs) could change the way we see the world. Initially we only used PDAs as organizers, but now PDAs are also cell phones, cameras and music players. And now they can even play video. PDA manufacturers have been trying to put video on their machines for several years, but only recently has the quality of the video been good enough for it to be marketable. Initially PDA processors were much too slow to handle the amount of information it takes to produce good-looking video. We’re seeing fast processors in most new PDAs from Palm and Windows based machines, and they will run video.

But why would you want video on a PDA? The possible applications are numerous. From the video enthusiast showing off her portfolio of work, to the ad agency pitching a campaign to the couch potato on the road, PDAs alter how and where we watch video. It’s always good to be prepared for the next big innovation in video technology, so here are some tips on how to make your video look its best on a PDA.

The Small Screen
When shooting for the small screen of the PDA, which is only a few inches in diameter, you should think big. Make everything as large as possible on the screen. Instead of shooting someone from the shoulders up, fill the viewfinder with their smiling face. If you are videotaping a parade, shoot a lot of close ups of marching feet instead of too many wide shots of the whole procession. When videotaping your pet parakeet, get in close to show off its beautiful colors. If there is too much happening in the video, it will be hard to tell what’s on the screen.

Try to stay away from camera movement. Keep the camera from shaking by using a tripod or by putting it on a table. If you use a tripod, avoid panning, tilting, or zooming. On a PDA, the movements will make your subject hard to see. What you are looking for in a PDA video is as simple and clear a shot as possible.

You should saturate colors and that means good lighting. Many cameras come with adjustments to change the video’s coloring via the white balance. By adjusting the white balance, you can make the video bluer or redder. When you are done with the white balance reds should be very red, greens, very green and blues as blue as a deep ocean. I would suggest shooting video for a PDA with a reddish tint. I’m not talking surface of mars red, but you should be able to see the pink of your lover’s cheek on a cold winter’s day or the red of a beautiful rose. You want the colors to sing, like your pet parakeet. Many consumer camcorders will not allow you to adjust your colors as subtly as this, so stick to a solid white-is-white at a minimum.

Make your video highly contrasted, again, with good lighting and good lighting design. Don’t shoot the video so bright that it looks blown out, or so dark that it seems like someone turned all the lights out. If your camera has an aperture, you can play it to see what looks best, because sometimes the camera’s automatic exposure doesn’t produce the contrast you are looking for.

Also concentrate on getting your talent in front of the right background to facilitate visual contrast. You’ll need to emphasize your subject more than you would on a larger screen. For light-skinned subjects, this might mean light-colored clothing and a simple and relatively dark background.

How to Edit
If you are already using footage not specifically shot for the PDA, don’t worry, you can still use your editing skills to make great PDA video. The rule of thumb when editing is to keep it simple. You should cut from one scene to another without using complex transitions. Creative transitions like dissolves, cross zooms, and pushes may look great on a television or movie screen, but they are not as effective when editing for a PDA.

You should let your shots run a little longer. Instead of putting in a new shot every three seconds, let them roll for six or even nine seconds. It takes longer for the eye to see objects on the small screen, so we want to let the audience have the chance to see what’s going on.

On the other hand, you also need to consider the length of your final project. Currently, you can get about thirty seconds of video into one megabyte of storage. You should think about editing your project down to three to five minutes for use on PDA. That’s about the attention span of Modern Man anyhow.

How to Put Video On Your PDA
How you get this perfectly shot and edited video to PDA really depends on what kind of PDA you have. There are several different formats for PDA video; the most popular run on Windows Pocket PC-based PDAs or Palm PDAs. The Windows Pocket PC format is heavily integrated with Windows based personal computers, and the Windows Media Format, so it is easier to get your video from the computer to your PDA. When you are ready to render your project to a file, just export it to the Windows Media Video format and upload it up to your PDA.

The project frame size should be 320×240 (or smaller) and you can use a lower frame rate as well, say 15 fps. You might have to experiment around a bit the first time, but once you have discovered the settings that balance quality against file size as you like, save the template to use over again.

Don’t discount Palm and its Palm operating system, either. It has been standing up to Microsoft and surviving for years. Most of the new Palm organizers are video capable and it is easy to find third party software to get video onto your Palm.

Getting Your PDA Video out There
There are several great ways to get your PDA video seen. You can let people download your PDA video from the Web to their computer and then they can sync it to their PDA. Some PDAs use wireless technology, so one interesting application might be to offer your video on a public wireless hotspot. You might even be able to beam video to your friends. Cell phones are now merging with PDAs, so extremely compressed video can even appear on a newer phone.

One of the simplest and most pragmatic ways to distribute your video is to use PDA flash media cards. It’s not cost effective to give people memory cards with your video, but the durable postage-stamp sized cards are easy to carry just about everywhere.

Flash drives now carry 128 or even 256 megabytes of memory, so you could potentially get quite a lot of video on one sweet little flash drive. PDA video is such a new idea that we aren’t sure where it is going right now, especially in the realm of distribution, but we can say that it is a practical reality.

PDA Video for the Future
Many of the more advanced PDAs that have video are also cell phones. Of course, everyone has seen the advertisements for cell phones that take pictures and send them to other cell phones. Just imagine taping footage of your Emmy for best home video and then sending it to your mom’s PDA cell phone. She would be so proud. On the other hand, picture phones were rolled out well over a year ago, and we can’t think of more that two people in our circle who have them.

PDA video might also be used in museums. Many museums already have audio systems that tell you about the exhibits as you walk from room to room. It’s not a big reach to imagine the same system accept video instead of just audio.

Of course people would want to use the video for commercial purposes as well. Picture this, you arrive at a new city on business, you call hotels from the airport and get a video tour of rooms and facilities. Restaurants could show you video of their food as you drive or walk by. Stores could show you how an outfit looks on a model as you are checking out the clothes rack. Hollywood would want to get in on the action and make movies available on PDA.

Amateur and professional videographers can use video-capable PDAs to show off their work. Just imagine whipping your PDA out of your pocket and giving people a look. It is much easier than carrying around that old VHS cassette and finding a VCR to play it on. Heck, it’s even easier than a laptop or even a portable DVD player with an LCD screen.

Brian Schaller is a TV news shooter, reporter and producer and owns a video production company in Northern California.