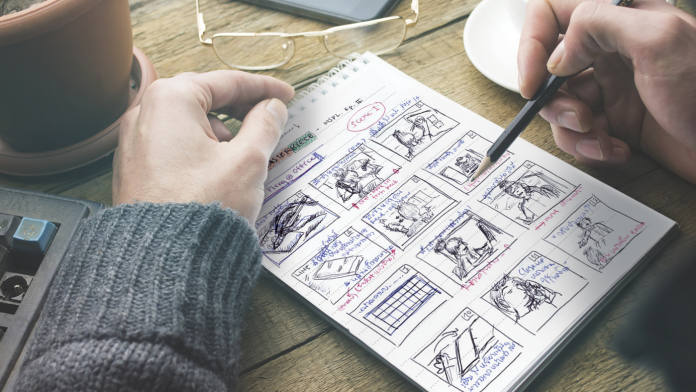 Everytime out, you pick up some trick, some shortcut, even when you can’t take any shortcuts. Something. Let me tell you a little bit about my odyssey of education in the film trade, which continues to this day.

For my third project as a director, I was using 35 millimeter film. I had an expensive DP, two gaffers, three PAs, a makeup artist — in all, a grand total of about 10 people working for me. I spent the day shooting a band in a famous Manhattan club. And as everyone packed up, and I saw the number of people I was working with and what the thing would cost as a result, I realized I didn’t need a crew this big. I didn’t need to spend $15,000 dollars, which is what this particular project cost, all in. Video was looking better all the time and was being used for features. Why not try it? It seems simple enough for most people. But when you’ve been trained to use film and all the attendant people who you need along with it, your mind gets very rigid.

Still, in the next video, I hired one DP, who also acted as gaffer, and found a good editor who would not only cut — as opposed to obscenely expensive post-production house — but sync and color correct, as well. Three passes later, we had our film shot on video. Grand total? Two thousand dollars. Give or take. What a change!

In another instance a few years back, I remember having a discussion with my DP on the second day of a shoot. I had been on YouTube watching some short films made on the iPhone. They looked amazing. I mentioned this to her and my camera operator. Both of them scoffed loudly about how the film was probably doctored and other tricks were involved. We were a long way, they claimed, from making serious projects with smartphones. I thought they protested too much. This year, after getting a new phone I used it for a middle section of my new video. Guess what? It looked amazing.

The lesson here is that you can use any camera available to produce your videos — and your project might even turn out better for it.

The lesson here is that you can use any camera available to produce your videos — and your project might even turn out better for it. There’s no one right way to shoot anything.

For quite a while, I used to wonder why my shoots were taking so much longer than I expected. One-day shoots turned into two or three day events. It was costing everyone more money. Where was I going wrong? Then it hit me. Too much coverage! I was shooting virtually everything from every angle. Instead, I decided to storyboard my shots so I could decide in advance what did and did not need coverage. Although my storyboard and shot list may change during shooting, this new approach helped save time and money. I’m storyboarding and still moving along quite nicely.

As a director, I’ve always felt I’ve worked well with actors, but it hit me a few months ago that I could be better. I could at least attempt to better understand what it means to be one. I took an acting class and learned a lot about how actors prepare, write a back stories for themselves and more. I noticed immediately how helpful it was. And it made me much more sensitive to the performer’s life. Directors, I cannot recommend it highly enough. PS: it was also fun.

Your actors aren’t the only ones who deserve your attention, however. I often sit with my editor, making suggestions. But recently, I did something new. As my editor was cutting, I simply said, “show me how to do that.” And I actually learned a bit of the technical side of editing. It was a revelation — not quite as hard as I thought.

Try to learn a little bit about everybody’s job on the set. They will respect you more, and you will make a better video.

4. Lighten Up and Collaborate

Too often, we directors get the God Complex. When we’re filming, it’s my way or the highway. Stop that. If an actor or your DP or gaffer has a good idea, don’t be defensive. If their suggestion sounds remotely cool, try it. Maybe you won’t use it, but it will establish even more trust on the set. Instead of fearing you, people will respect you. Directors, that is the only way to fly. And, as always, best of luck.

Peter Gerstenzang is a video director, writer and actor.