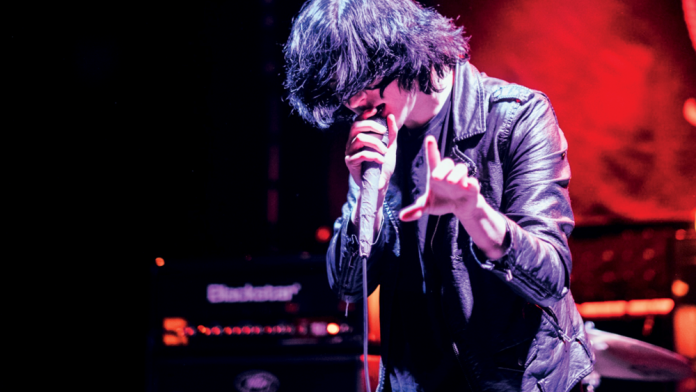 Last summer, I survived a video shoot that seemed to have been conceived by the darkest forces in the universe, starring a rock and roller who was so neurotic he made Woody Allen look like the Dalai Lama. However, I succeeded, perhaps even triumphed, in the end.

Since my nutty rocker was only the first of several factors that went terribly wrong, I feel proud of myself for getting through the shoot. I also wouldn’t have grown as much from the experience if things had gone sailing along, or if I had made a video with a less volatile front man — like Axl Rose. In any case, here’s my story, featuring tips to help you fellow filmmakers survive a nightmarish shoot.

Pre-production, or I Should Have Known Better

The rocker I was working with — we’ll call him Jerry McDougal to protect his anonymity — was acting like a weirdsmobile from the moment we started discussing the look, the wardrobe and everything else under the scene. That includes his use of “mise-en-scene,” which he pronounced correctly, but used incorrectly. I probably wrote ten treatments for his music video. Only on the fifth one did I insist on getting paid more for my writing. Don’t be like me. Ask for rewrite money as soon as you feel you are going above and beyond a fair number of treatments for the film.

Ask for rewrite money as soon as you feel you are going above and beyond a fair number of treatments for the film.

I also sensed trouble when Jerry not only asked me what sort of “costume” he should wear on the shoot, but seemed to be hyperventilating both on the phone and in person. At the time, it didn’t strike me as something prophetic, but the day of the shoot, it sure proved to be. Keep an eye on your star. See if he or she is really up to the pressure of acting and then decide if you can handle nervousness and weirdness, or if you want to cut and run — or keep a shrink on the set at all times.

The Day of the Shoot, or All Hell Breaks Loose

After weeks of planning, treatments and enough storyboarding to make Martin Scorsese look like Ed Wood, we were ready to shoot Jerry McDougal — and I mean that literally.

But we calmed down. I met my DP, my gaffer and another eight people in my crew at a famous Manhattan rock club on a hot June morning at 9:00 am. We only had the place until 4. I was calm and pleasantly excited when Jerry’s manager (let’s call her Shirley) approached me with a smile as broad and unnatural as the main character in the film, “Dr. Sardonicus.”

Shirley took me aside on the burning sidewalk and said, “Peter, Jerry just called. He thinks he’s had a heart attack. He’s at St Vincent’s. He doesn’t know if he’s going to make the shoot. Oh, and for the time being you can’t tell anyone.”

They teach pilots in the Air Force, whose planes are going down, if traditional methods aren’t bringing you back up, try something — anything. And when your leading man isn’t there, and you’ve been preparing for two months and have the same amount of time to shoot as Michael Bay has for lunch, that’s good advice for directors, too.

First, I went into the bathroom and had a panic attack myself. That used up about three minutes. Then I realized I had to do something a bit more positive. I told my DP, my gaffer and my sound guy to set up. I told Jerry’s band to get up onstage. I started to feel better, simply by doing something. I decided, after a little talk with the DP, to shoot master shots and close-ups of Jerry’s group and of our extras — also known as the audience — and if Jerry didn’t show up, we could do some close-ups of the star later and cut him into the footage. Just then, a make-up girl fainted due to the heat. It was that kind of day.

The song we were shooting was done for playback. We had it on the house sound system, but there was a power outage, so the sound went in and out. We played that sucker about 15 times. Each time, we got a great close-up of a hand on a guitar neck or a grimace from a keyboard player. The day had started in total despair, and now I felt I had a lot of good footage in the can. Don’t just do nothing on a terrible shoot. You can always get some good shots.

By 2:00 p.m. I was feeling quite proud of myself. Instead of the day being a wash, I’d managed to get many of my shots done. And I’d survived. Even when Jerry’s manager came up within earshot and announced “how wrong all the extras look for this kind of music!” Nevermind the fact that she had chosen all these hardworking folks personally. A few walked out. Several of them looked so bummed, that I, the director, had to motivate them to look excited and upbeat again. I started by kicking the manager out.

Then, the star himself came sheepishly walking in with a hospital bracelet on his wrist. After the rocker did his best to maintain the fiction that he had broken out of the ICU, braving death, we decided we had enough time to shoot him. Yes, with the camera.

We cued up the music numerous times, and magically, my star, Jerry, who had just come this close to death — imagine my hands wide apart — did take after take and, astonishingly, got stronger with each one. It was so hot that another extra fainted, but I got what I needed from my rocker. The clock was ticking. I was sweating through my Big Star T shirt. But at 4 pm, somehow, astonishingly, amazingly, I yelled, “Okay everybody! It’s a wrap.”

Ultimately, my star, Jerry, more insecure and neurotic than Charlie Brown on bad acid, rejected the video. He saw the finished product, which turned out quite well in my mind, and decided it didn’t work for him “aesthetically,” a word I think he looked up on the way over to the editing room.

But that’s not really the point. I felt, and still feel, a sense of triumph and exhilaration from last summer’s bummer shoot. Although it had as many marking of tragedy as King Lear, I refused to let it become so.

After cursing a blue streak and hyperventilating into a brown bag, I took stock of the situation. I thought of what I could  do under the circumstances and figured out a way to come up with images. And the more I conducted myself with cool and grace and got the work done, the better I felt and the more artistic I became.

So, when you’re hit with a nightmare on a shoot, simply get to work. Give direction to an actor. Shoot some establishing shots. Get something in the can. Act like a director and you will be perceived as one. Take it a minute at a time and you won’t believe what you can accomplish.

Peter Gerstenzang is a video director, actor and humorist.

If you're doing video production because it's a wonderful hobby and you're okay with spending your own money to make your video creations, you...