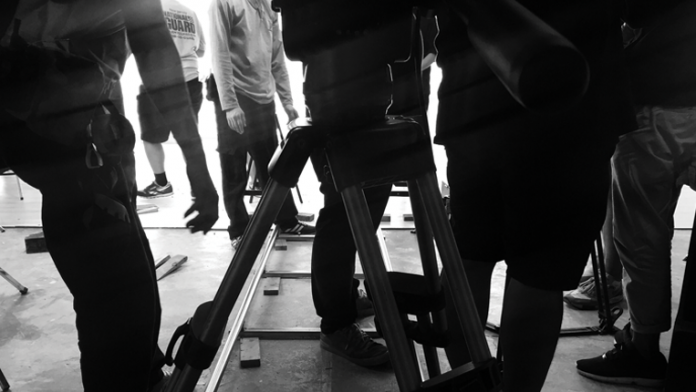 By definition, collaboration is the act of working with someone to create something. When we set out to create a short film, a commercial or a documentary, we rarely do so in a vacuum. We work with others Ã¢ÂÂ cast and crew to bring a vision to life. Our capacity to work together can mean the difference between success and failure. Our goal is to help you navigate the murky waters of maintaining a creative environment, while keeping a production organized and a cast and crew happily working together.

The most important step in creating a collaborative production is putting together the right team. As Jim Collins describes in his book Ã¢ÂÂGood to Great,Ã¢ÂÂ you need to Ã¢ÂÂget the right people on the busÃ¢ÂÂ Ã¢ÂÂ and the wrong people off. The initial criteria are quite obvious: you need a sound recordist, a camera operator, a grip and so on. The way these people interact with one another, and within the scope of production, is much more subtle. Always look for team players. That term is so broad it can mean many things, but hereÃ¢ÂÂs what we look for:

They see themselves as part of the whole. A person who can see that they have something to contribute is great, but more importantly, they need to have a larger vision and realization that they are part of a team, letting go of the part of their ego that says Ã¢ÂÂI am the most important person here.Ã¢ÂÂ There is no room for big egos in a production.

Passion brings creativity. We enjoy taking cues and input from others on the set; when people are engaged, theyÃ¢ÂÂll be a source of creativity.

They want to work. A great team member wants to work hard. Production days often start early and go late, and can be very taxing. People with a strong work ethic thrive in this environment. People that are there just for fun will often wear out quickly, goof around, begin to complain and ultimately hurt production. They bring everyone else down through their complaining or by not pulling their weight.

They are passionate. You want someone who loves what they do. Passion brings creativity. We enjoy taking cues and input from others on the set; when people are engaged, theyÃ¢ÂÂll be a source of creativity.

Once youÃ¢ÂÂve assembled your team, it is time to build a framework that allows for creativity while setting clear expectations.

YouÃ¢ÂÂre a director first, a friend second. ItÃ¢ÂÂs very easy to get caught up in the fun and camaraderie of a set, and everyone wants to be liked Ã¢ÂÂ especially the director. However, your crew will ultimately come to appreciate a director who comes prepared and consistently finishes on time. This might mean putting aside the fun-guy attitude and being strict on the schedule youÃ¢ÂÂve established. That is ok! If you are the director, thatÃ¢ÂÂs your job.

Establish a protocol for decision making. Everyone has different ideas about creative control. ThereÃ¢ÂÂs an exercise in team building called Ã¢ÂÂWhoÃ¢ÂÂs got the Ã¢ÂÂDÃ¢ÂÂÃ¢ÂÂ Ã¢ÂÂ the decision. This is a question you as the director need to answer for yourself and then clearly convey this to your team. There are three main approaches that can work in production:

Gather input and decide. In this approach youÃ¢ÂÂre open to input from others, but have made it clear that the ultimate decision is yours. For most productions, this works best.

Majority wins. In environments where all the team members have equal equity, this democratic method might be ideal. The team votes and the majority wins. I would only recommend using this for student projects, group projects or a few other limited situations.

A simple rule I have for myself is to have creative ideas and solutions for everything prior to arriving on set. I know what will work and know what I want. With that baseline, the first thing I do on set is ask for input. This could be asking an actress how sheÃ¢ÂÂd block the scene or asking my camera operator if they have any ideas for an angle. They key thing to remember is that I already have answers to these questions. I am looking for creative ideas, and will often incorporate them, but I always have a solution ready to go.

A good team is the most valuable asset you have in production. Some of the greatest directors work with the same people time and time again. There is a deeply synergistic relationship that is built with common experience. Invest your energy now into building that team, and you will reap the rewards now and into the future.

Stephen Chollet is a two-time Emmy Award winning producer. He specializes in in commercial, corporate, social, and documentary production.

7 Script Editing Tips that Will Take Your Screenplay from Good...

Even though you’ve finished writing your script, it's still a first draft and most scripts need more than one draft to be ready for...