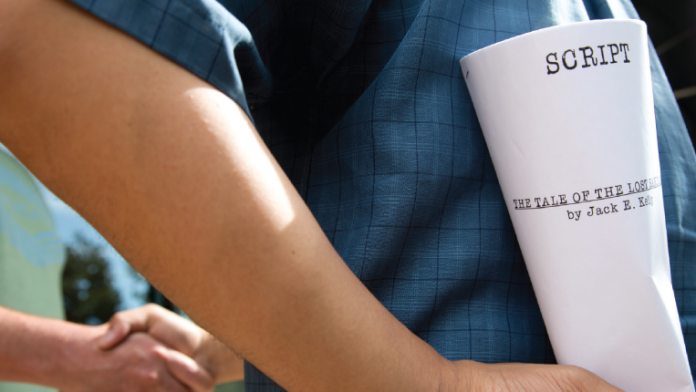 Most of us have watched a major stinker, even one with a decent cast, but if youâre an aspiring screenwriter, that had to give you some hope because in your drawer thereâs a screenplay that you know is better than what you just sat through. Maybe a lot better.

Maybe your inspiration for writing screen stories comes from bad movies youâve seen. Maybe itâs from an unforgettable cinematic experience that you canât wait to recreate for an audience of your own. Whatever your inspiration, the time has come to send your masterpiece out into the world.

But how do you go about selling your first movie script? Where do you start?

The last 30 years or so has seen a proliferation of how-to literature, college programs, screenwriting expos, conferences and podcasts about best practices for writing screenplays and getting them into the hands of a producer. We sifted through this pile of advice and kept an eye out for the dos and donâts of making that first sale.

Keeping it Real and Other Options

According to âThe Unknown Scriptwriter,â a popular web portal for screenwriting tips and tricks, approximately 50,000 spec scripts are registered with the Writers Guild of America every year and sent out to agencies, studios and production companies. Thatâs not counting all the screenplays that are not registered.

These kinds of odds suggest the obvious: if you want to sell a screenplay, write a really, really good one.

Chances are youâre not going to sell the first script you write. Screenwriting is like any other craft: The more you work at it, the better you get. Apparently Oliver Stoneâs screenplay for âPlatoonâ was his eleventh script, but only the first one that was marketable.

Even if your screenplay is really good, chances are also that your first sale wonât go into production, at least not immediately. In fact, your first sale might not be an outright sale.

The more likely scenario is that a producer will want to option it first. This means you sell the producer exclusive rights, for a specific period of time, to develop the scriptâfind the money and talent to get it made. The going rate for optioning a screenplay is about 10 percent of the purchase price. You get to keep that when the producerâs option runs out. At that time, rights and control revert back to you and you can try to sell it somewhere else.

The lesson here is to match your script with an independent producer who has both an appetite for your story and the chops to get it made.

As Dorothy Parker once said, âHollywood is the only place where you can die from encouragement.â

Dan Akroydâs script for âGhostbusters IIIâ was optioned and it made the rounds with producers for years. Nobody wanted to make it. The script was finally used as the basis for âGhostbusters: The Video Game.â Not a bad outcome.

The lesson here is to match your script with an independent producer who has both an appetite for your story and the chops to get it made. Donât try and sell your sci-fi special effects script to a producer whose company only makes small character-driven films like âThe Station Agent.â Have a budget range in mind and research production companies to learn about the genres and scope of productions these companies favor.

How do you know youâve got a marketable property in the first place? Who can tell you itâs an excellent script thatâs worth a producerâs investment?

The traditional route for soliciting feedback begins with passing your script around to your peers, your family, to fellow travelers in filmmaking, to your writing teachers. Join or start a screenwriters group and get some outside opinions about your writing.

Take to heart the feedback you get and respond to any patterns in the comments you receive. If more than one person tells you that your dialogue needs work, work on improving the dialogue. To get it right, rewrite, rewrite, rewrite. Itâs all free advice â take it.

Eventually, though, you will want to get your script into the hands of industry professionals who can assess its merits and market readiness. Thatâs not free.

Screenwriting contests and festivals can be important outlets for your work. Entry fees range from $40 to $100. Winning the right competition can bring you a cash prize of up to $35,000, but more important, the recognition will open doors. Agents, producers and executives will come calling and asking for meetings.

Some contests are more like festivals packed with workshops, roundtables and networking opportunities. Others are straight-up competitions where the prize might be professional mentoring or representation by an agency.

Just as you would investigate what kinds of films studios and production houses are interested in, so should you research the screenplay competitions before you submit your work. Donât send a blanket application to them all because different contests are looking for different things.

Leave it to the professionals.

There are plenty of online script gurus who, for a fee, will read your script and tell you whether itâs any good or not.

Like everything else on the Internet this is âbuyer bewareâ territory. Some of the script analysis services you can find online are form-letter evaluations; query letter and formatting advice; professional analysis with follow-up support; and market readiness assessments.

Shop around. Check out the readers, the consultants and their services. Have they ever sold a screenplay? Did it get produced? You can find the track record of professional script consultants by checking out their membership on IMDb, the Internet Movie Database, where you will find their produced writing credits.

Screenwriter Ashley Scott Meyersâ IMDb bio includes more than 20 optioned scripts and several that were produced.Â  Meyers has converted his industry experience into an online screenwritersâ advice hub where you can find a rich mix of free articles, interviews and podcasts.Â  Additionally, SellingYourScreenplay.com offers a range of paid services, from on-line classes to full professional screenplay evaluations by Meyersâ stable of seasoned script readers and screenwriters.

On his website keepwriting.com, Trottier explains how his analysis focuses specifically on a scriptâs place in the marketplace.

âMost writers like my 14-point analysis,â says Trottier. âBecause you get grades on 14 screenwriting elements.â

We asked Trottier what a first-time screenwriter has to do to crack the marketplace.

âYou need to put a lot of thought into a marketing plan that includes more than just query letters. Put yourself in a position where you can be discovered. For example, getting a credit for an indie production, writing a web series, becoming a reader or production assistant and otherwise getting yourself into the game.â

Trottier says common screenwriting errors that get in the way of a producer reading your script to the end include overwriting, obvious exposition, derivative scenes and characters, and clichÃ© dialogue.

For a script to be market-ready, says Trottier, âYou need a great story with fascinating characters. The script should be well executed and creatively written with characters that fly off the page. By âcreatively written,â I mean that if itâs a sword fight scene it needs to be unique or have a twist that sets it apart. For example, recall the sword fight scenes in âPrincess Bride.ââ

We asked Trottier for his final thoughts: âWrite at least two screenplays,â he says, âto see where you are in terms of talent and current ability and then youâll have a better idea of what your odds really are.â

The journey of most movie scripts begins with a log-line. Thereâs good reason there are entire how-to courses devoted to crafting an articulation of your screenplay in 25 words or fewer.

The discipline not only serves as the foundation of your pitch, which is basically an exercise in selling your story, but the log-line is also a thumbnail expression of the core concept of the movie. Once you believe in it, use it as a source of inspiration when youâre crafting your screenplay. The log-line will become an invaluable reference as youâre writing because it will remind you, in case youâve strayed, of all the elements that need to go into your story.

Letâs look at the thinking that goes into crafting a log-line, using the movie âE.T. the Extra-Terrestrialâ as an example.

Hereâs the logline: An extra-terrestrial finds himself stranded on earth and with the help of a young boy makes his way back home.

Thatâs not great. Letâs see how we can make it better.

The subjective storyline is the heroâs story, the personal story. In âE.T.,âÂ  itâs the story of a meek little boy finding the courage, conviction and self-worth he needs to be able to pull off the difficult and dangerous goal of saving the alien.

So, letâs take another shot at that logline: A meek and alienated little boy finds a stranded extra-terrestrial and has to find the courage to defy authorities to help the alien return home.

A log-line doesnât need to be elegant prose, but it should include at least these ingredients: the main character; the villain(s) or obstacle to overcome; the central problem; the premiseâwhat makes this story unique; the subjective storyline; and the genre.

See if you recognize this logline: Two lovers plan to flee from their feuding families who forbid them to marry.

But when we apply our logline ingredients, hereâs the difference: Two young lovers living in a ghetto defy their feuding familiesâ ban on marrying and plan an escape that propels them toward tragedy.

The one-sentence description of your movie wonât be easy to write. But after diligent crafting and shaping of the log-line ingredients, youâll be rewarded. A succinctly expressed core concept of your movie will do a lot of the heavy lifting when youâre writing, pitching and, ultimately, selling your work.

Peter Biesterfeld is a seasoned script-to-screen television and video producer and trainer specializing in documentary.Â