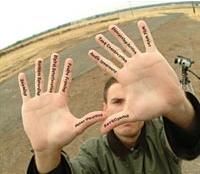 What’s one of the differences between a professional and an amateur in any endeavor? A professional has either learned or been taught to avoid mistakes in his or her field. This can lead to a bit of arrogance on the part of the professional when viewing someone else’s work. "Look at that composition." a professional camera operator might say, "This guy doesn’t know head room from a head waiter." If you want to shoot video like a pro you need to know what the major mistakes are.

Let’s start with an experiment. Put down your camcorder. Now, look through one of your eyeballs (or both if you are feeling ambitious) and attempt to zoom in on an object in the vicinity. Concentrate. No luck? Don’t take it too hard. It’s not a natural way to make an object larger on the screen. It’s handy as heck, but it’s not natural.

If you are new to camera work my suggestion is to only use the zoom feature when you are not rolling tape. Use it to make your subject more prominent in the screen if you can’t or don’t want to get physically closer (when shooting subjects like mountains in the distance, or that snarling Rottweiler next door), but don’t zoom as a shooting technique. In other words, avoid recording zooms as you shoot.

Have you ever zoomed your camcorder all the way in, have it pause slightly and then, as you continued to push the zoom control, watch the picture grow even more in the viewfinder? That’s a digital zoom, and it’s not really a zoom. Sure, the picture zoomed, but the pixels remained the same. So, don’t use digital zoom. Every camera that has digital zoom, also has a menu item to turn it off. Find it and use it.

Few things are as frustrating as missing a great shot because you weren’t recording, except, possibly, missing that shot because you thought you were recording and you were not. Learn your equipment. If it makes a clicking noise when it begins capturing footage, listen for it. If there is a blinking light in the viewfinder, look for it. If you have to look to see a tape physically moving, do so until you are sure you are rolling. If you don’t, you may not only miss a great moment in video, you could end up with lots of shots of your feet.

The audience of your video can only see what you show them. You have a responsibility to keep the subject in the frame. When you are capturing video of people, there is a rule of thumb to make sure you have them composed correctly: keep the eyes of your subject about a third of the way down from the top of the screen. This works if you have a head-to-toe shot of the person and it works if you have an extreme close-up where the person’s face fills the frame. The eyes are in the same relative position.

When you’re shooting, the microphone is always on, capturing audio that syncs up perfectly with your video. That audio is natural (Nat Sound) and it is difficult to recreate. The gentle twittering of birds, wind in the trees, a child’s laughter: allow these sounds to speak for themselves. Remember that the microphone will also pick up everything you say and your audible reactions (Huh! Ho, Ho, Ho!). Resist the temptation to make noise. You can always add narration later, but you can’t remove your statements from the raw footage without losing the other sounds that you may wish to save. So, and this isn’t meant in a mean way: Shut up. Run your camera, not your mouth.

Some people like to talk with their hands. Sometimes the camcorder is in their hand and rolling when that is happening. The result: a weaving, bobbing, unsteady mess that would make a deep-sea sailor blanch. Or you might have a habit of pointing a camcorder like it was a flashlight or a garden hose, "What’s that over there?" (whip pan) "Hey, look at that!" (whip pan) "Ooh, pretty colors." (whip pan). This may not have the effect you had in mind. Even worse are the folks who never stop at all, but just flow back and forth over the scene as if they were spray-painting it with the camera. Please land somewhere and stay a while.

Cameras with automatic exposure will attempt to adjust your picture so that it looks as good as possible under a certain lighting condition. If you point your camera at a bright light source (such as the sun or a bright window when you are indoors) the camera will adjust the aperture of the lens to compensate. If your subject is sitting on the ledge of the window when this happens, you might be able to see things outside, but your subject will probably be a dark silhouette without detail. Your gear may have a backlighting feature to compensate (by overexposing the background) or you could try to add light your subject (this is not easy), but the best solution might be to move your camera to avoid dealing with the bright background.

On professional productions, there is often an operator (or an entire crew) to check audio levels, watch out for wind noise, listen for airplanes flying overhead and check for buzzing from bad connections. You can avoid most common problems by simply plugging a set of headphones into your gear to monitor the audio recording. If you are using an external microphone, listening with headphones can keep you from making an embarrassing error, like not turning on the microphone.

Another rule of thumb: start recording five seconds before the action in your frame happens and continue to record five seconds after the actions concludes. This is useful in editing, especially if you ever intend to use special effects or transitions, like a dissolve or wipe. You may say, "I don’t always know when the action is going to happen." The answer to that is "Concentrate and anticipate." Tape is cheap. Don’t hesitate to roll lots of it.

Your goal should be for the viewer to forget that you were running the camera. The viewer should never think about you at all and if they do, you should hope the thought is not, "Why can’t this person hold the camera still?" Be smooth, let the action happen within the frame, make your movements deliberate and motivated (follow the action or reveal information) and don’t draw attention to yourself. Use a tripod until you get the feel for a steady shot. Some camcorders have image stabilization, but propping yourself against a wall or tree or holding your breath can also help take some shakes out. Unless you’re zoomed all the way in, you can probably keep a camera steady in most situations.

One for Each Finger

We’ve looked at ten common mistakes that can be made by an unsuspecting camera operator. Learn them, avoid them and your video footage will improve, guaranteed. Then you will also be qualified to look at the video shot by others, shake your head sadly and murmur, "What were they thinking?" Just like the pros.

[Sidebar: You Move Me, Baby]

Why move the camera at all? In early silent films, the director locked the camera on a tripod and the action happened on a stage, like a play. Innovative directors then strapped the camera to horses, trains and other moving objects to give the audience a feeling of being in the same situation as the camera. Point of View (POV) shots like these can be very effective.

When covering action with a camera, there may be specific reasons to move. One reason is to follow the action. If the subject is worth recording at all, it’s your responsibility to the eventual viewer to capture what they want to see. If the quarterback throws a football in a game and you pan to follow it (go ahead and zoom out at the same time, then zoom back in) the viewers want to see if the receiver caught the ball or not. If you don’t show them, they’ll never know.

Another reason to move is to reveal something. For example, start with a shot of a pristine beach and pan over to reveal a pile of trash. You tell a story with what you reveal and what you conceal.