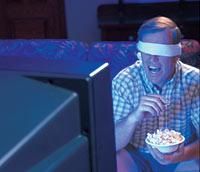 A good sound track is the key to a great video. Not sure you agree? Try this: pop a movie you’ve never seen into your DVD player. Start the movie, but play it with your eyes closed. Just listen to the soundtrack. No peeking!


As you listen, notice how much of the plot you can follow using only your ears. Notice how the ambient audio (including some subtle sound effects) indicates where the scene takes place, whether in a busy office, a quiet cottage, a nuclear submarine, or wherever the action is set. Listen to the way that the music sets the mood. Note whether the scene is tense or tender. Is the pace of the scene frantic or relaxed? Notice how the dialogue introduces the key characters and identifies important plot themes. It won’t take long to figure out that the bulk of the story enters your brain through your ears, not your eyes.


Next, take off your blindfold, press the Mute button on your remote, and watch the visuals without listening to the accompanying audio. Before long, you’ll likely be lost. Without the soundtrack, it can be difficult to tell what’s going on. Who’s on the other end of that phone call? Did the leading lady turn because she heard a gun shot, the doorbell or a baby crying? Who is the guy that just walked in? And why are they suddenly on an airplane? OK, OK! Now that you’re convinced of the importance of audio, un-mute the movie and rewind it so you know what’s happening! I’ll wait.

There are four important elements that come together to make a complete soundtrack, and every editor should know them. They are natural sound, music, narration and sound effects. When they are used together effectively, the viewer won’t notice them. The best audio edits are smooth and subtle, and do not call undue attention to themselves. When the mix is off, the viewer will notice. Crackling audio, music that’s too loud or too soft, and fake-sounding audio effects will distract the viewer from the message of your movie. When it comes to watching video, hearing really is believing.


Let’s take a closer look at each of the four essential audio elements that you have at your disposal.

Nat sound (also known as "natural sound" or "wild sound") includes any audio recorded along with the video that you shoot. This includes ambient audio. When you record a scene on a bench in a city park, the sound of children laughing and playing in the background is part of the nat sound in that environment. In the context of this article, we’ll also consider on-camera dialogue that is recorded along with the visuals to be natural sound.


Nat sound is often the only audio that amateur videographers include in their videos. While home videos typically consist entirely of this kind of audio, Hollywood producers go to great lengths to avoid using it altogether. The audio recorded with the images that are shot for most feature films is usually used only as a guideline by a team (or multiple teams) of people that re-creates every sound and every word of dialogue in a scene. Foley artists create and record everything from footsteps to keyboard clicks as separate sound elements that can be mixed together with great precision and control. While all of this may be unrealistic for the videos that you produce, there is an important principle to learn: if you want your videos to sound more like professional productions, you’ll have to spend some time editing your audio.


If you record dramas, documentaries, events, interviews or instructional videos, nat sound is the foundation of your soundtrack. It’s critical that you start with the highest quality audio possible-this means that your camcorder’s built-in microphone is not the best choice. An external microphone and a good pair of headphones are essential.

Simply adding a track of background music can greatly improve your videos. Music has great power to impact your viewers emotionally, and the pros use it all the time to add zing to a scene. Listen carefully to the music tracks that accompany the programs that you watch on TV tonight. Music often creeps in quietly-unnoticed by the viewer-then builds as emotions heighten. Want to tell your audience how to feel? Use music. Some of the most suspenseful movies of all time are known by their music tracks (Jaws and Psycho, for instance). The anticipation at the sound of the music in these movies could scare an audience out of its seat.


In the same way that it can build tension and fear, music can build joy or excitement. Imagine how the music would swell (along with the hearts of the viewers) as a hero triumphantly emerged from a smoldering building with a child in his arms.


You can change the entire feel of a scene by simply changing the music track. The same sequence of shots can feel spooky, silly or sad, depending on the music that you select. To see for yourself, shoot this short sequence, edit it together, then play it back with several different music tracks.