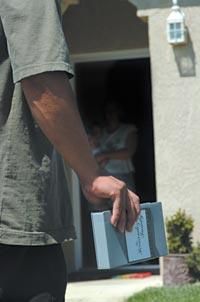 You’ve finally finished editing that tape you shot at last month’s family reunion. You’ve made sure to include good footage of all your relatives, from Uncle John to Aunt Clairmae to your mother’s 90-year-old grandfather who came all the way from Budapest. It’s a job well done and it’s time to sit back and relax, right?


You forgot the final piece of the puzzle: how are you going to get your finished video into the hands of everyone who might want to see it? Professionals call this step in the process distribution, a word that conjures images of Wal-Mart warehouses, forklifts and semi trucks. But don’t let the word intimidate you; we’re only talking about ways to get your video into the hands (and in front of the eyes) of its intended audience.


In this column, we’ll cover the three main ways people deliver their videos: tape, disc and the Internet. We’ll also take a look at the ways in which thrifty consumers can use all three of these media in an easy and cost-effective way. We’ll assume that your finished video is either sitting on the hard drive on your computer, or on a tape in your camcorder.

By far the most common method of video distribution (aside from broadcast television, of course) is to make copies on VHS tape and then either mail or hand-deliver the copies.


If you can view your video on a television, you can make a VHS copy. To make VHS copies of your video, simply cable the video and audio outputs of your camcorder to the video and audio inputs of your VHS VCR. If your VCR and camcorder have S-Video connections, use them; this will yield a higher quality copy. You may have to go into your VCR’s menu system in order to select the proper inputs (usually a selection between Input 1, Input 2 and S-Video if it’s available).


While you’re accessing the Menu, check to see what kind of audio you’re recording. If your VHS VCR is capable of recording HiFi audio, you’ll probably have a selection of Linear, HiFi and Mixed. Choosing Mixed will insure that your audience will be able to hear the audio whether or not they have a HiFi VCR.


Things to remember when making videotape copies of your work:

These days, many people have at least one DVD player in the home, so you might consider distributing your videos via disc (either DVD or VCD). Home DVDs are recorded onto recordable DVD discs (DVD-R or DVD+R), which vary in price but at this writing are available for around $1 each for generic media when bought in bulk. VideoCDs are recorded onto CD-R discs (less than $0.20 each) and though the quality is about the same as VHS, you will occasionally get some very bad digital artifacts, especially if there is a lot of movement in your video.


Discs have the advantage of being more durable than videotapes. They don’t stretch out when you play them over and over and they are much less likely to become damaged when you ship them. Also, if you’re making a DVD, the video and audio quality is far superior to what you’ll get on a VHS tape and perfect digital copies are also possible. On the down side, producing DVDs and VideoCDs can sometimes be a hassle, especially if you have to install hardware into your computer to make it possible.


The easiest way to make a DVD is to use a stand-alone DVD recorder. These newish and still somewhat pricey devices are poised to kill off the VCR. Looking like a normal living room DVD player, DVD recorders record to disc with the press of the Record button on your remote control. If you have one of these devices, it’s as simple as cabling up the camcorder to the DVD recorder, exactly like what you’d do to make a VHS copy of your video. Some stand-alone DVD recorders have built-in hard drives to facilitate the duplication process, allowing you to record your video onto the hard drive, then make all your copies from the hard drive onto the DVD recorder. Some also allow you to create simple disc navigation and chapter lists on your DVD or VCD.


More and more computers are shipping with the ability to write DVDs. If your video editing computer doesn’t have this ability, consider upgrading; it’s probably cheaper than you think (about $350 at this writing), and it gives you access to the format that’s quickly becoming the standard for home video viewing. Although DVD authoring on a computer can be complex, we’ve found that it is generally easier than video editing. While we are currently seeing significant compatibility problems with older DVD players, DVD is definitely the future.

One of the more exciting and ultimately challenging methods of video distribution is the Internet. Placing your video on a Web site gives you a way to make your work available to hundreds of millions of potential viewers. Because you don’t have to make multiple copies, Internet streaming offers one of the most cost-effective ways to reach large audiences.


There are two main types of Internet video: download-and-play and streaming. You’ve likely downloaded thousands of files to your computer and video is no different. Streaming video, on the other hand, requires the use of expensive servers and allows the viewer to watch the video without downloading the entire file first and has the advantage of near-instant playback (if your Internet connection is fast enough). Sophisticated servers can also deliver video to large numbers of viewers simultaneously. Progressive downloads works without a special server and lets your viewers begin watching the video before it has finished downloading. With progressive downloads, if the connection isn’t fast enough, you can simply wait until the video is finished downloading and play it back full-quality at your leisure.


There are, of course, some important drawbacks involved in streaming your video on the Internet:

If you decide to pursue one of the non-VHS methods of distribution, bear in mind that you’re likely to encounter a member of your audience who is having trouble playing back your DVD or VCD or who doesn’t have their computer configured properly for streaming video.


In that case, good old VHS is still great to have around. It’s easy to use, inexpensive and just about guaranteed to work in almost every home in this country. Nonetheless, you may find yourself endlessly tweaking and configuring your final DVD to minimize playback problems on the widest range of home DVD players.


On the other hand, if you are technically inclined and you enjoy doing this sort of thing, more power to you. You’ll likely become an expert on the topic in no time.