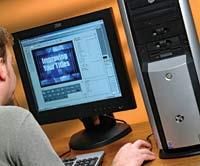 Effective video titles create an energetic dynamic, which captures viewer attention and enhances the visual experience. Decisions about creating a specific title include a range of factors, from artistic and psychological impact to readability. While titling can be a creative and subjective process, there are several basic guidelines to help you create professional-looking titles for your projects.

The Good, the Bad and the Ugly

The first step in creating effective titles is being able to determine a good title for a bad title. Font style, size and color are the most important aspects. A worst-case titling scenario includes bad choices for all of these. Other factors include flat titles or lack of depth and separation from the background image, pixilated images due to compression and poorly positioned copy.


For example, a very thin font such as Monotype Corsiva or Arial Narrow at a 14-point size, with a dark purple color on a black background is a titling nightmare. Choose fonts that are bold and simple and limit yourself to no more than two or three font styles within any given project. This keeps the video from appearing too busy, which distracts viewers from the rest of the content.


Additionally, sans-serif (without flourishes) fonts tend to work better than serif fonts (those with flourishes). This helps reduce the chance that your characters will bleed together, making some letters difficult to distinguish correctly. Further, very narrow horizontal lines have the potential to jitter, sometimes dramatically, on interlaced television (but not on progressive computer screens – so watch out). Frame flicker, also known as line twitter, occurs when you have fine, single-line details that appear in only one field of video. The result is that these details flicker at the video frame rate, while the rest of your video refreshes at the field rate.


If your project demands a particularly thin font style, you can increase the readability by increasing the font size, as well as the kerning, and reducing the amount of text that appears at a single time. Some software allows you to control kerning, which is the amount of space in between letters, to make text more visually appealing.


By avoiding thinner fonts, not only do you reduce readability issues, you also avoid some problems associated with compression. One of the most common compression problems is artifacting, sometimes referred to as mosquito noise. This occurs when colored pixels from your title are generalized and scattered around the edges of titles.


More often than not, these artifacts are a result of the sharp, high-contrast edges, which may fall on compression boundaries or blur on lower-resolution televisions. You can reduce the risk of this by avoiding the thinner fonts altogether.

Choosing the correct font size is equally important. Obviously, there are extremes to avoid at both ends of the spectrum. While using a large font dissolves the readability issue, selecting a grossly over-inflated font size will make your video appear amateurish. A little bit of good aesthetic judgment, along with the following guidelines, will help you determine a reasonable size for your titles. Typically, size categories are broken down into Titles, Body and Footnotes – similar to print media.


A good point size for titles is 36 to 48 points. This assures your text is large enough to read, but not so large that it appears clumsy or disproportionate to the rest of the image. What works well with print media (a 12 to 14 point body standard) is out of the question for video.

When picking your font color, you want to select a color that contrasts with the background. Going back to our nightmare example, the dark purple/black color scheme renders the title nearly invisible. By simply changing the font color to a more contrasting color (light green or dark yellow) the result is immediately better.


Video editors need to be aware that not all colors are NTSC-safe. Your computer, and by extension your titling program, can typically use and display roughly 16 million colors, while a television can only show around two million. The result of using colors that are not television-safe is that your titles may bleed or smear, making text difficult or impossible to read. Less disastrously, but still important, what looks like lemon yellow on your PC may come out mustard yellow on a TV. Fortunately, most titling tools are video friendly and may have built-in NTSC color palettes. If you create titles in your image editor, keep your title’s saturation and brightness levels down to avoid this issue. Also look for NTSC video filters to apply to title clips.


Viewing your video side-by-side on a computer monitor and an NTSC television monitor while you edit will let you to make manual corrections by sight. This will also help you catch interlace flickering. More professionally, you can use a vectorscope, which uses color bars to check image hue, and a waveform monitor, which measures the luminance (brightness) of an image.

Another important aspect of good titling is layout. If you’ve gone through the pains of selecting the appropriate style, color and size for an effective title, it makes sense to position it where your audience will see it.


Watching your safe areas is both easy and important. Imagine your client’s reaction to seeing their 40% Off Sale air as a 0% Off Sale, due to improperly placed titles.

Sometimes you’ll find that even using a large bold font, with a good color selection still doesn’t make your title jump off your background. And sometimes, your title just looks a bit bland and flat. Three effects that give titles some depth are outlines, gradients and drop shadows.


You can also separate titles from background images by using graphic elements and motion. You can isolate and emphasize titles by using a graphic such as a still or animated lower third. This technique is ideal for framing footnote information pertaining to the visual content.


Motion, such as scrolling credits or zooming titles, is not only helpful in separating titles from the background images, but also adds another dynamic, in that it allows you to guide the viewer’s eyes. However, you must be careful when applying moving text to interlaced video on a television, since it can cause jitters. If your title is scrolling too slowly, it will either appear to be cropped or flickering, since interlaced video uses fields. This is because the refresh rate too closely matches the scroll rate, so that each time a scan line is drawn, it is only drawing the same half of the title. As a rule keep your title moving up at least twice as fast as the scan line rate. The NTSC standard is 60 scan lines per second, so you want titles scrolling at a rate of at least 120 lines per second or about four seconds from the bottom to the top of the screen. However, don’t select a speed that’s over 240 lines per second, or your titles will scroll by too fast.

An alternative to scrolling is to fade your titles in and out. Fading titles are actually more readable than scrolling titles, because the eye doesn’t have to track them. The rule of thumb is to keep a title on the screen long enough for the viewer to read it three times. Clearly, you’ll want more important titles to be visible longer, but fades are easy to create and attractive in their simplicity.


Keeping these fundamentals in mind will allow you to deliver quality titles, enhancing the look of your video as well as the experience of your viewers.