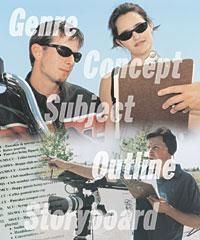 With this column, Home Video Hints ups the ante. To date, we’ve focused on the casual, sometime shooter who wants decent-looking videos with the least possible effort (access past articles online at videomaker.com). Over the next 12 issues we’re going to survey the basics of video production – the procedures you’ll need to create short, easy, but professional looking programs. Though we’ll vary our topics from issue to issue, we’ll end up covering the basics of pre-production, production and postproduction. To start right at the beginning, today’s homily covers step numero uno in making a video: figuring out what video to make.


Once you’ve taped enough vacations, holidays and family events, you may want to create a real program from scratch. But what kind of program and what’s the subject? A famous journalist once confessed, "Writing’s easy: you just stare at a blank sheet of paper until drops of blood stand out on your forehead." The same is true about starting a video project. To get your project launched (and prevent excessive blood loss) break the job down into practical parts and complete them one at a time. In order, you need to decide on your program’s genre, concept and subject.

First, what genre, what basic type of program is it? Maybe a documentary (your daughter’s prowess at softball), a training program (How to drive a stick shift car), a story (the shrub that ate Toledo), an editorial (trashing the environment is wrong), a commercial (the Lion’s Club charity breakfast) or a music video. These are just a few standard video genres.


Why bother? Because each different type of program has a particular form, includes particular components, and demands a particular production approach. These requirements aren’t enforced by some kind of program police – after all, nobody cares what you do with your camcorder. But over the century during which visual media has evolved, folks have gradually developed the techniques that work best. If you’re the next Orson Welles, you can safely ignore all this conventional wisdom. For all the rest of us, though, it’s at least a good place to start.


Program genres are covered at length in the June 2002 issue, so let’s illustrate the process of selecting a program type with a single example: the commercial genre. Return with us now to the Lions Club charity breakfast.


Almost every commercial has at least three objectives: