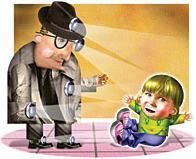 You may think that shooting unobtrusively is just for spying on bad guys or hotties at the beach; but covert videography has many other uses, even for casual shooters. If you ever wished you were invisible or just a fly on the wall, here are some tips.


But first, why would an upstanding citizen like you want to shoot sneaky? Well, think about these situations: