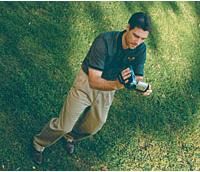 At the Grand Canyon last spring, I shot a slow, careful pan across the magnificence in front of me, confident that my wide-angle lens setting and camcorder lens stabilization circuits would deliver a creamy-smooth panorama. No such luck. Camera shake was indeed zero, but the panning speed was erratic and the image oscillated up and down as if shot from a small rowboat. As Popeye used to say, "I was humiligrated!"


My shooting tactics usually work well, so let’s run through the drill for steady hand-held shots and then see why my shot failed this time. Before we’re through, we’ll look at better ways to control image "hulas," including the casual shooter’s least-used tool, the tripod.

Even without image stabilization (an absolute must for your next camcorder – but see Sidebar 1 for a caution) you can usually get solid shots by observing a few classic rules: