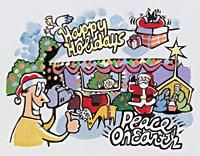 We have some tips and ideas to improve your inevitable assortment of holiday video clips.In a particularly humbling photogenic moment, this suave and graceful columnist, along with his freshly-cut Christmas tree, fell down the side of a hill as wife Sue rolled tape. However deflating this was to my dignity, the resulting video sequence provided comic relief from a holiday show that threatened to bog down in endless loops of opening presents.


The truth is, most holiday programs could use some sprucing up (so to speak), so that’s today’s agenda. For simplicity, we’ll draw examples from the secular side of Christmas, though of course, December celebrations come in many flavors and Thanksgiving’s a major event as well. In line with the Home Video Hints unofficial motto, "Low-tech, low-cost, low-sweat," here’s an easy check list of tips for achieving better festive videos however you celebrate the season. The handy tips: 1) set the stage, 2) decorate with audio, 3) shoot long, 4) zoom short, 5) get cutaways, 6) be prepared 7) get different angles from each setup, 8) defeat bad lighting.

To set a mood on the upcoming grab bag of festive shots, start your show with footage that establishes your holiday theme. A montage of Christmas cards, a moving shot of neighborhood houses ablaze with outside lights or an empty floor space that slowly fills with a pyramid of gifts. Don’t worry if the concept’s hokey; the season has a hallowed, built-in corniness, and we love it for that.


Each Christmas, our family adds a new glass ornament to our tree with the year painted on it. In the past, I have opened a show with a succession of these decorations, sequenced by date and leading to the main title: Christmas, 2001.

This is the season of traditional music (as elevators proclaim throughout the land), and since we’re talking about private family viewing here, worry not about copyrights. You’re free to use whatever tracks you like.


Music is especially useful in pulling together a mixed bag of shots and sequences taken at different times during the holidays. Even a single five-minute edited sequence (like gift-opening) might be synthesized from 50 different shots, with audio as choppy as a radio set on station seek. Most editing software will let you run music under production sound. Set at about 50 percent of full volume, it will smooth the discontinuities between audio clips and tie everything together.


For extra fun, try playing audio against the feeling of video. Imagine the soothing strains of Silent Night under frantic footage of mom and pop working desperately against the Christmas Eve clock to get things perfectly set up for the next morning.

Holidays offer terrible temptations to snapshoot, recording endless snippets of action as they present themselves. So, make a special effort to give yourself plenty of footage in every shot.


As a rule, try to roll camera at least five seconds before the important action commences and keep rolling five seconds after you think it’s over. You never know when you’ll need, say, a dissolve between shots that requires extra tail end on the outgoing shot and extra head end on the incoming.


Another reason for rolling early is to stabilize. Have you noticed that it takes a second or two to frame the shot, adjust the zoom and settle into a comfortable shooting stance? All too often, the beginning of a shot is marred by start-up corrections made while some important action is unfolding. So, try to anticipate imminent action and hit the Record button early.

One of the biggest problems with inexperienced footage is zoomitis: a constant shifting of image size that wastes screen time and sends the message that you don’t really know what you want to frame and present to your audience.


True, well-planned zooms can be very effective (extreme closeup on knife carving; then zoom-out to full shot of turkey, then side dishes, then family around the table), but only when used sparingly. Most of the time, you’ll get better results if you use the zoom function to quickly re-frame for a new angle, with the expectation of dropping the zoom itself when you edit.


Fast zooming is essential because a slow zoom takes so much action time that snipping it out will create a jump cut (discontinuity) between the old angle and the new one.

Even if you do lose some action when removing a zoom, you can cover the loss if you have cutaways shots inserted between the mismatched angles to conceal any discrepancies. To continue the gift-opening example, suppose Aunt Min hands a gift to Uncle Miltie, who has trouble getting the ribbon untied and the wrapping off. Seeing this, you whip around and grab a closeup of Aunt Min’s face as she watches, then resume the angle on Milt as he finally starts getting his package open. In editing, you can turn a minute of fumbling into five seconds of smooth unwrapping by substituting Min’s closeup for the unwanted middle of Milt’s shot.

The holiday season is one two-week photo op — or actually 50 different mini ops that happen when you least expect them, like the sight of your grandkids struggling to get the tree off the top of the darned SUV.


Because I have a tiny Mini DV camcorder, I can wear it on my belt, but even if your camcorder’s bigger, try to keep it with you, or at least stashed in the kitchen or living room in the vicinity of potential action.


And don’t forget tapes and batteries. I rotate three batteries, with two in the charger at all times. I have at least one extra 60-minute Mini DV tape, unwrapped, labeled, and ready to swap in seconds. I like to pre-black my tapes too, but that may be too obsessive for most casual shooters.


You need to be especially cautious when moving from a cold,outdoor environment to a toasty warm, indoor environment. Moisture inside the house will almost immediately condense in and on the camcorder, which will result in fogged optics. This fogging can remain for tens of minutes and in extreme cases can damage your video camera, but not if it is turned off. Many camcorders can detect moisture and protect themselves by automatically shutting down, but since the optics are going to be fogged anyway and you won’t be able to shoot, just plan on not being able to use the camera for 10 minutes after returning from the Christmas tree hunt. Try to avoid using your camera outside for long periods in very cold conditions, since this can severely deplete the battery.

Get Different Angles from Each Setup

Your niece is a sugar plum fairy in your town’s 57,000th annual production of The Nutcracker, and there you are stuck in your seat. How can you get different angles to use for the cutaways prescribed above?


The short answer is, just do the best you can. You can get profile shots of rapt audience faces by shooting along your row of seats. If you have an external LCD screen, reverse it, raise your camera just above shoulder level, and aim it at the rows behind you. When the show’s over and applause starts, raise it even higher, or, if the situation’s informal enough, simply stand up and get a wide shot of the cheering throng.


As for the stage itself, try to get cutaways of other dancers (or singers or musicians or shepherds) when your favorite sugar plum fairy isn’t featured. And don’t forget shots of the conductor.

The holiday season is rife with bright pinpoint lights punctuating dim living rooms or streets at night – a joy to behold, but tough to expose.


Many camcorder exposure systems, fooled by a few bright lights, underexpose scenes as a whole. The Christmas tree looks just dandy, but the folks opening gifts all resemble ink blots. Though it’s impractical to prescribe for every lighting problem, here are two general approaches to auto-exposure woes.


First, cut out exposure shifts exactly as you cut out zooms. When you pan from a dark area to a light one, the camera may overexpose the first second of the brighter shot before it can adjust. Anticipate this problem and be prepared to cut this exposure wobble out as you edit. (Incidentally, you can use the same technique to get rid of lags in the autofocus system.)


Second, find the most important part of your subject, let the auto exposure set for it, and then lock the exposure. That way, other parts of the scene may go over or under, but the essential parts will be right on the money.


A final hint about exposure: for some psychological reason, underexposed dark shadows are far more acceptable to viewers than blinding, burnt-out whites. As a result, when you must mix two light levels in one shot, it’s often better to set exposure for the lighter part and let the darker areas do the best they can.


The holiday season is a great time for video. Family get-togethers are perfect mood setters for video memories.


Whether it’s Christmas, Hanukkah or the winter solstice you celebrate, may yours be warm and loving – and looking good on video.