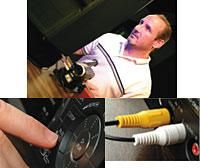 If I was writing a best-selling paperback, this might be titled Editing for Dummies (except that I don’t think newbies are dumb). If you’re a casual weekend shooter, you may not be editing your camera tapes. After all, even the simplest digital editing equipment will set you back some dough and you don’t know how much time you want to give this hobby well, you know the reasons. If I said you could learn to make snappy home videos in 20 minutes without spending a penny would you give me a hearing?

Step one is to assemble an editing outfit using your camcorder as the source deck (for playing back your original footage) and your home VCR as the assembly deck (for recording your edited program). Connect your VCR to your TV set, where you’ll watch what you’re doing. This setup looks like Figure 1.

Your camcorder is probably equipped with several output jacks. For hooking up with a VCR, you’ll want to use the yellow RCA jack for video and the white and red RCA jacks, respectively, for left and right audio channels. (If your camcorder is mono, only the white audio out jack will be present.) If camcorder and deck both have S-video jacks you can use them instead of the yellow RCA jack, but you’ll need a special S-video cable. As for the VCR to TV connection, whatever you already have is fine. The connection from the record VCR to your TV is for monitoring purposes only and do not affect the quality of your recording.

The only tricky part about this setup involves the resulting picture on your screen, because sometimes it seems to be one thing and sometimes another. The explanation is really very simple: