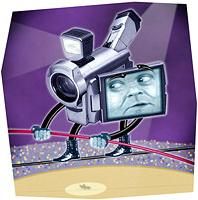 As a videographer, you can use a variety of methods to edit your video. These techniques can be broken down into two broad categories: in-camera editing and editing done in post production. The way you will edit your production greatly impacts the way you’ll have to shoot your footage. Not sure why? Read on. In this month’s column, we are going to look at these two styles of editing and at the shooting techniques required to make each one a success.

While the differences between editing in-camera and shooting to edit are many, the main difference between the two is a matter of sequence. When you shoot to edit, you can shoot your scenes out of order, since you’re going to re-arrange them in post production anyway. When you edit in the camera, however, you need to shoot all of the scenes in order. Because in-camera editing requires that scenes be shot in the order, you might have to do some leg work to produce a scene that requires more than one location. Consider the following sequence: (see Figure 1)

Shot 1: A man sits on his couch watching TV, when he realizes that he is hungry.

Shot 2: He runs out the front door of his house, gets in his car, backs out of his driveway and screeches away.

Shot 3: He arrives at a fast food restaurant and orders a burger at the drive-up window.

Shot 4: He peels out of the drive-thru and

Shot 5: returns home where he gobbles down the burger at his kitchen table.

To edit this sequence in the camera, you would have to shoot the first few shots at the house, travel to the restaurant to shoot what is needed there, then return to the house to shoot the final shots in the kitchen. This running around can be time consuming, not to mention tiring. As productions get more complex, traveling can become quite inconvenient.

In addition, you’ll need to get each shot right the first time. There’s no “fix it later” flexibility here. As any extreme sports enthusiast will tell you, flying by the seat of your pants requires skill and planning before you take the leap. Editing in the camera requires a great deal of planning before you roll the tape.

When you edit in the camera, you will need to be sure of every shot before pressing that record button. Because you won’t be able to trim a shot later, you’ll have to shoot it at just the right length. Not too long, not too short. Mastering your timing can be challenging. It is difficult to make precise edits in the camera. Even a few extra frames can make your viewers feel uncomfortable as they watch.

It’s a good idea to rehearse each shot before you lay the scene down to tape. Turn the camera on, but don’t press record just yet. Practice your camera move. Can you do that pan in enough time? Can you hold the shot steady while you zoom? Check your lighting to make sure the shot isn’t too dark. If you have a headphone jack, use it to monitor your audio level. In short, practice makes perfect when shooting to edit. Prepare your shot as much as you can before you record. You get only one shot.

There will be times, however,when you’ll screw up a shot while editing in-camera. What do you do then? One solution is to rewind, re-cue the tape and try again. In many cases it’s the only option. Depending on the camcorder you are using, another answer may be to insert audio or video over the “ruined” portions of your show.

If your camera has audio dub capabilities, then you can lay sound, like music or narration, over portions of audio without affecting your video. Likewise, if your camera has video dub, you can lay video over unwanted shots while leaving your audio untouched. By using your camcorder’s dubbing capability, you’ll be able to cover up mishaps in the camera, without having to re-shoot your whole show from the beginning.

Shoot for the Edit

Shooting to edit is less stressful than editing in-camera because you don’t have to get your shots right the first time. Call it, “shooting with a safety net.”

Another advantage of shooting to edit is that scenes can be shot out of order. Hollywood crews have produced motion pictures this way for years. If a movie begins and ends in Los Angeles, but the middle takes place in London, the crew will shoot all of the L.A. scenes at the same time. The same is true if an actress has just a few lines at the beginning and ending of a production. It’s more efficient to shoot all of her lines on a single day than it would be to have her come back to the set several times.

Editing is all about options, so shooting to edit is all about variety. You’ll find that professional videographers shoot numerous takes, from a variety of angles, until they get just the shot they are looking for. When they’ve got it just right, they shoot a back up of their perfect shot, called a “safety.” If something should accidentally happen to their initial take, they’ve got a back up. With the pressure off, you have the freedom to shoot take after take before moving on to the next one.

Don’t be afraid to roll a lot of tape when you shoot to edit. Where the in-camera editor must trim shots extremely tight as he shoots, the post-production editor wants as much footage as he can get. It’s a good idea to roll tape a few seconds before the action starts and a few seconds after it ends so that you can adjust your in and out points in the edit bay. More footage means more options. You’d be amazed at how handy a few seconds of seemingly unusable footage can be when you’ve got a hole to fill in your program.

On the downside, you may have to shuttle through a ton of videotape when it’s time to edit. How can you make sure your own safety net doesn’t strangle you? For one thing, you can learn to budget your time and the amount of tape you use by comparing how much footage you shoot to the length of your finished program. Often called a shooting ratio, it can give you a good feel for how quickly and economically you are able to get the shots you need.

For example, if you shot thirty minutes of tape to produce a five-minute video, your shooting ratio would be 30:5, or more appropriately, 6:1. That means that you shot six minutes of raw footage for every minute of edited tape in your program. To improve efficiency, you might try to achieve shooting ratios closer to 2:1 or even 3:1.

Even with a small shooting ratio, you’ll still have a lot of tape to slog through in the edit suite. That’s why shooting to edit requires additional organization. When you gather a lot of footage, it is essential that you keep a log as you shoot. Logging requires that you keep a written record of which shots are on which tape and where the best shots are located. When you get into the edit suite, you will be able to find shots more quickly. Logging can be as simple as identifying the shots on a tape by their order and approximate length, or, for the ultimate in precision, by noting time code numbers.

Logging is even more effective if you slate your shots. You’ve all seen the little clapboard that filmmakers use–the one they clap down while yelling, “Take 15.” It is called a slate and it is used to identify quickly the beginning of a shot. If you use a makeshift slate, such as a dry erase board, you can flag each scene you shoot. A short description of each shot is also helpful when its time to edit.

As you’ve seen, there is a great deal of difference between shooting to edit and editing in-camera. Shooting to edit requires a lot more work in post production, but eases the pressure on you, the videographer. Editing in-camera can save time and money, but you have to get it right the first time.

Regardless of which technique you choose, you can expect to get outstanding results if you begin with the end in mind.