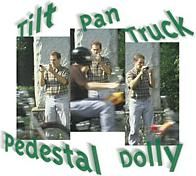 If you were to teach a complete stranger how to shoot video, you could boil it down to, "point the camera at your subject and press the record button." That’s functionally all it takes. Unfortunately, that simple point-and-shoot approach leads to a rather two-dimensional view of a three-dimensional world.

Just as we might turn our heads to follow the flight of a bird, we can use camera moves to provide our audiences with a sense of depth and motion. When used judiciously, camera moves not only add motion to a medium that thrives on movement; they also contribute to the overall aesthetic quality of your program by letting the viewer live vicariously through you.

We’ve discussed camera moves in the past. By way of review, however, we’ll outline them briefly: