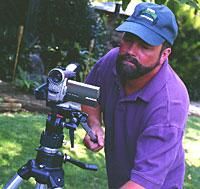 One of the most useful tools you have at your disposal as a videographer is a video tripod. For stability and versatility it has no equal. It can go places you cannot go, reach places you cannot reach, move in ways you cannot move and stand in for you when you are unable or unwilling to hold your camcorder yourself.

You probably already use your tripod for getting steady, jitter-free shots. With such a multipurpose item in your video toolbox, however, you have to ask yourself, "Am I using my tripod to the best of its ability?"

This month we’re going to re-examine that three-legged wonder and talk about the multitude of ways in which a tripod can help you shoot good video.

Anatomy of a Tripod

For all its useful applications, there isn’t much to a tripod. As you Latin aficionados might guess, the word "tripod" comes from a combination of the Latin prefix tri, which means three and the suffix pedis, meaning foot. We call the feet of a tripod "sticks" or legs, and by pulling them out from their folded position you can make the tripod stand on its own. You will find that the three-point stance of the tripod is very stable, just ask any football player.

Usually tripod legs are of the telescoping variety. This means they can extend to several feet in length and lock down so they don’t collapse during use. The length of the legs varies from tripod to tripod, but when the legs extend fully, the tripod will most likely stand between four and six feet in height.

The three legs of a tripod meet at the tripod’s head. The head is where you attach your camcorder. You typically fasten the legs to the tripod head with a small bolt that screws into the bottom of your camcorder.

Putting the Moves on Your Tripod


Let’s put your tripod to work. You can begin by using it to perform some of the basic camera moves you’ve learned. For example, every tripod head should offer at least three movement options–pan, tilt and pedestal. That is, the head should be able to swivel from side to side and tilt up and down. The head is also telescoping, which means you can raise and lower the head–pedestal up and down–as appropriate.

How do you perform a camera move? There are two ways. First, you will find a short arm attached to the tripod head. The arm serves as a handle for panning or tilting the tripod head.

Second, there should be a small crank at the base of the head. Turning this crank will raise the head and your camcorder, perhaps as much as a couple feet higher than before.

The ability to control the speed of your camera moves can come in handy. If the tension on your tripod head is too loose, you’ll find your camera will wiggle and move too fast. Tighten your drag too much and your moves can become stiff and jerky.

Tightening the screws or turning the arm completely will lock your tripod head. Why would you want to lock down your camera head? An unattended camcorder on a tripod can easily succumb to gravity or wind, causing your camcorder to tip or spin unexpectedly. Such a sudden movement can be forceful enough to topple your tripod and potentially damage your camcorder, not to mention ruin your shot.


How else can you make your tripod work for you? It can easily stabilize a shot while standing on uneven ground.

When you use your tripod, your first inclination could be to extend those legs all the way, open up the tripod as far as possible, and start shooting. This approach can be problematic on an uneven surface, however. Suppose you’re standing on a rocky bluff with your tripod. There may not be a nice, smooth surface on which to place your tripod. If you extend those legs all the way, you may find the tripod doesn’t sit level.

To remedy this situation, begin extending one leg of the tripod at a time. Hold the tripod so the head is level (some models include a bubble level for this purpose) and at the height you want for shooting. Then open the tripod and extend the first leg until it hits the ground. Lock it tight. Do the same thing for the other two legs. You may find that each leg is extended to a different length, yet the tripod remains stable and the camcorder level.

Because the length of each tripod leg is adjustable, you can perch the tripod atop any uneven surface in this way and still have a stable and level platform from which to shoot.

Because your tripod’s legs are adjustable, you can set it up so that it can point straight down at a table or a desk. The table or desk, of course, is where you place your subject (a photograph, a homemade title graphic, an African Dung Beetle or whatever).

With your camcorder secured to the tripod head, extend one of the tripod’s legs to its full length. Next, open up the tripod and position it so that the extended leg touches the floor while the two unextended legs butt right up against the edge of the table.

Those two unextended legs should be perpendicular to the table surface. Now, extend them until they touch the floor. The result is a tripod that looks off balance but is stable nonetheless because it is supported by the table as well as its own legs. Most importantly, the camcorder is in a position to be tilted down and pointed directly at the table’s surface.


A variation of the tripod is a device called a monopod. It’s a tripod-like device, but instead of three legs it has only a single vertical leg. While it cannot stand on its own, it can be moved from location to location very quickly and it still provides a stable shooting platform.

You can use your tripod as a monopod by extending the tripod’s legs but not opening them up. The result is something akin to a staff with a camcorder on top.

To use your monopod, rest the legs of the tripod on the ground while holding the camcorder with both hands. To perform camera moves such as panning and tilting, you can simply lock down the head and pivot the entire support as necessary. When the time comes to change locations or shooting positions, simply move the whole rig. Just pick it up like you’re carrying a royal scepter, and move it to its new location. You need not even stop shooting because setting up your makeshift monopod again is as simple as placing it on the ground.


All this talk of extending the tripod’s legs can give the impression that tripods are only useful for shooting up high. Not so. They’re equally good at shooting down low.

If you don’t extend the legs at all but still open the tripod, you have a short one-to-two-foot camcorder stand. Put it on the ground and not only can you shoot things at your feet but you can tilt up and get a shot of tall subjects from a low angle. This technique can be very impressive when shooting very large objects; the extreme low angle makes large objects look even larger. You can also place your shortened tripod in unusual places to get rock solid shots not otherwise available.

There’s no matching the tripod for versatility and usefulness in the world of videography. You will surely find the tripod to be an indispensable part of your toolkit–one you will not want to live without.