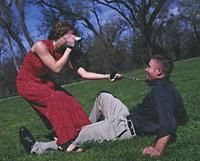 When it comes to shooting interesting and entertaining home video the key is creativity. You are probably familiar with the basic camcorder moves, like pan (turning left or right), tilt (moving the angle up or down), zoom (adjusting the lens to telephoto or wide angle) and dolly (moving the camera itself forward or backward). Practicing these basics is essential to mastering the art of making video. But creative camcorder work involves something more. It requires thinking outside the box. Considering angles and selecting shots that will better communicate the story that you have to tell on tape.

To be sure, there are some images, like a volcano erupting or a plane crashing, that are so striking that it doesn’t matter how you videotape them. But when it comes to creating engaging and entertaining home video, you’ll surely benefit from some time-tested camera techniques.

Get Down to Business

If you are like most people, your tendency is to shoot all of your footage from a standing position. If you are 5 foot 8 inches tall, your videos are presented to the world from the point of view of a 5’8″ person. The result is predictable, and often boring, video. Next time you shoot don’t limit yourself to only shoot from a standing position. Mix it up a little and your videos will be much more interesting.

The height of your camcorder can elicit a particular response from your audience. Let’s say your first shot is a standing, eye-level shot of your spouse. This is a straightforward shot–no surprises. Now, drop the camcorder to the floor and shoot up at your partner. This can make your subject appear larger than life. The steeper the angle, the more dramatic the effect. With a steep angle, you can turn a toddler into a looming monster, or emphasize the immensity of something already huge, like the Rocky Mountains or the Sears Tower.

Shooting a person from a low angle makes him look powerful or ominous. Reduce the angle by distancing yourself from the subject and you give the viewer a subtle feeling of inferiority. Essentially, you are manipulating the viewer’s perspective. The psychological effect that the proper angle has on an audience is stunning.

Take Your Shots to New Heights

Let’s reverse the process and raise the camcorder angle to shoot down on your subject. This could mean climbing up on a ladder or roof, but could be as simple as raising your tripod or holding your camcorder over your head.


We’ve tried lifting the camcorder up and down. What if we rotate it a bit instead? By moving the camcorder so the horizon is no longer parallel to the top and bottom of the screen, you essentially set the world on its ear for the viewer. Skewing the image slightly so that the whole world "tilts" tends to agitate the viewer, sometimes to a panicky state. Professional cinematographers use this to great effect when shooting thrillers. Even if the viewer does not actually feel panic himself, the skewed image will sound alarms in his head, telling him, "Hey! Something’s not right, here!"

I’ll be a Monkey’s Cameraman


David Letterman introduced a technique known as the "Monkey Cam". He would occasionally let a monkey loose in the studio with a video camera strapped to its head to show the audience what the monkey was seeing. While this was done for comic effect, there may be something that you can use here. Try taking the camcorder off the tripod and do some handheld shooting. In essence, become the "Monkey Cam".

To see this kind of camcorder work in action, watch the TV show, "Cops" sometime. With their use of hand-held camcorder work, not only do their viewers occasionally see a world in chaos, but they also feel as if they are right in the middle of the insanity. The effect is quite dramatic.


The extreme closeup gives your audience an intimate view of the world, rich in detail. The extreme wide shot, by comparison, is the macroscopic view–your world in its entirety.

Normally, when beginners shoot video, they do not think about the people who will later watch the footage. Typically this means neglecting to record extreme shots, be they wide or tight.

Perhaps your wife and dog are waiting for you on the street outside your office building. An extreme wide shot, probably from across the street, is essential to set the scene for the viewer. This shot lets the viewer know that the scene takes place on a sidewalk outside a building on a busy afternoon. The shots that follow will make more sense because the stage has been set.

Extreme closeups can serve as pointers. They draw the attention of your viewer to details that might otherwise go unnoticed–the shepherd in the background of a religious painting, the cryptic signature at the bottom of a document or the bruise on a piece of fruit. When your goal is to draw sharp attention to detail, the extreme closeup is the best tool at your disposal.

Perhaps the shot of your wife and dog from across the street is followed by a medium shot in which your spouse checks her watch. An extreme closeup of her wristwatch adds detail that will direct the attention of the viewer to the time.

When you choose an extreme closeup of a person’s eyes, the viewer is drawn into the thoughts of that person on screen. Zoom in on your subject’s mouth–especially when she is speaking–and you draw sharp attention to what she is saying.


A great thing about today’s small-sized camcorders is that you can put them in very creative places. You don’t have to limit camera position to where you can go, keep an eye out for interesting and unique places to put your camcorder. You see this technique used often in professional sports. There are now cameras mounted on NFL goal posts and NBA baskets.

You might place your camcorder on the ground in the middle of a parade route to capture a unique angle of the local high school marching band as they parade past. You might shoot from inside your refrigerator as someone opens the door and searches for a snack. Maybe place your camcorder in the mailbox to record someone looking for that awaited letter or sweepstake announcement. The possibilities are as limitless as your imagination and the size of your camcorder.


Don’t think that the few examples of creative camcorder work described here encompass all the possibilities open to you. When you think about your viewers when you shoot, other creative ideas will stir within you. Run with them. That is the nature of creativity. It’s purely an artistic exercise, with few "rights" and "wrongs." The approaches outlined here, though, will help kick those creative juices flowing, hopefully through your camcorder and onto the screen.