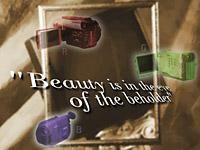 As a videographer, you get to wear many hats. When you wear the hat of the historian, for example, you record significant events for future reference. The storyteller’s cap, on the other hand, compels you to relate a visual tale, with a beginning, a middle and an end.

The artist’s hat, on the other hand, brings out the Bohemian in you, putting you in a league with Rembrandt, Picasso and Van Gogh. When you have your artist’s hat on, the light becomes your palette and the camcorder your canvas. You no longer simply "shoot" footage–that is too pedestrian. You create–dare I say "compose"–works of visual art.

Good composition is perhaps the most difficult skill for the videographer to master, largely because it is often a matter of personal taste. You must compose visual imagery with your own eyes knowing that the eyes of others will judge your work.

So how can you hedge your bets? What can you do to ensure that your video appeals to the broadest audience possible? There are some guidelines for good video composition we’ll review here. Let’s begin with the basic rule every videographer should live by.

The Golden Rule of Thirds

Centuries ago, artists in the ancient world discovered that if you paint or otherwise position objects on a rectangular canvas at certain predictable points, the eye will more easily flow across the canvas and the overall effect would be more harmonious than simply placing them haphazardly in the picture.

These artists devised mathematical ways of splitting the canvas so that they would know where to place their images for greatest effect. The result was known as the Golden Mean, and artists throughout the ages have used it to compose pleasant-looking pictures that are easy to look at.

For our purposes, however, it won’t be necessary to investigate the long, tedious details of the Golden Mean. In the interest of expediency, videographers have adopted a modified version of the Golden Mean, called the rule of thirds.

Essentially, the rule states that you should mentally divide your frame into thirds, both horizontally and vertically. The result is an imaginary tic-tac-toe board that fills the video screen. Then, as you shoot, you place key elements of your shot somewhere along those lines, preferably at the points where the horizontal and vertical lines intersect. The result, so the theory goes, is a more well-balanced visual image.


So what are some of the key elements of your shot? First and foremost is your subject. Your first impulse may be to position your subject smack dab in the center of your frame. If your subject is very large, like the White House, for example, you don’t really have a choice but to center it in the screen. The rule of thirds, however, generally dictates that centering your subject will create an uninteresting composition.

To apply the rule of thirds, move your camera so that your subject is on one side of the frame, resting along one of the two horizontal or vertical lines, preferably at a point where those lines intersect.

Another important element of your shot is your subject’s surroundings. In an outdoor setting, you may have trees, vehicles, landmarks and the like. Indoors, you have furniture, windows and appliances, to name a few. How do you deal with them?

First, identify only a couple of the elements surrounding your subject that are important to your shot and that you have some control over. Why is it so important to have control over these elements? Well, you should try to frame your shot initially by moving the camera. When that fails, however, you shouldn’t be afraid to move one or more shot elements to suit your needs. You are an artist, after all: you are no longer just shooting, you are composing. Position a chair, for example, so that when your subject is properly placed along one of the "thirds" lines, the chair will also fall at another intersection of a horizontal and vertical line.

Continue this way with the other primary elements of the shot. Keep in mind that it’s best to place each element in the way that makes it most pleasing to look at.

The horizon is another aspect of your subject’s surroundings that can play a big part in the composition of your shot. Positioning the horizon properly on outdoor wide-angle shots can make a difference in the look and feel of your shot.

Again, your first impulse may be to position the horizon right across the middle of the screen. The rule of thirds, however, proposes that you put it somewhere along one of the two horizontal lines.

Do you move it up or down? Because you have two horizontals to choose from, you must play with the angle of your camera until the horizon simply looks right with respect to your subject and the other elements of the shot. One measure of correctness is to gauge whether or not the placement of the horizon helps emphasize the subject or de-emphasize it.

This is one of those situations, though, when you, as the artist, must take creative control of your shot and, with the help of the rule of thirds, decide where in the shot the horizon should go.


So far, we’ve talked about composition in terms that apply to any type of subject. When your subject is a human being, however, there are a couple of specific rules that apply.

The rule of proper headroom, for example. Headroom is the space between the top of your subject’s head and the top of the frame. Apply too much headroom and your subject appears to be sinking; too little and your viewers’ eyes will be drawn to the subject’s chin or neck.

As the rule of thirds states, the most important elements should be one-third of the screen away from the edge–and with people, the most important elements are the eyes. Place them on the topmost horizontal line of your imaginary tic-tac-toe board, and you should have no problems, even if this means you cut off the top of the subject’s head, as in an extreme closeup.

There’s also a rule for lead room, or the space in front of a subject. If you’re tracking a subject who’s walking from right to left, for example, place him on the rightmost vertical line, leaving the remaining 2/3 of the screen as lead room. If your subject is talking to someone off screen right, place her on the leftmost vertical line.


Another critical element of good composition has little to do with the rule of thirds at all. It concerns adding depth to your shots. This is the trick of applying a three-dimensional quality to your inherently two-dimensional video.

The best approach here is to make perspective work for you. Frame your shots so that your subject or other elements are shot at an angle rather than straight on.

If you are shooting a house, for example, don’t shoot it directly from the front. Rather, pick a corner of the house and shoot while facing that corner. In this way, you create perspective for the viewer by showing that the house is indeed a three-dimensional object. The corner of the house will be in the foreground while the front and the side of the house shoot off toward the horizon.

Another approach is to clearly establish objects in both the foreground and background of the frame. Better yet, try for foreground, middle ground and background. This works especially well when you shoot with a camera at a wide-angle setting. A classic example of this technique: In the lower foreground is a telephone on a desk. It is shot from such close proximity to the camera that it appears to take up almost a third of the screen. In the background is the figure of a woman. At the distance she is from the camera, she looks to be no taller than the telephone. As she approaches,crossing the middle ground, she seems to grow, and when she reaches the telephone, all you can see is her hand as she picks up the receiver.

This technique tricks the mind into believing that what it is seeing is three-dimensional, when in fact it is a two-dimensional representation of the 3-D world. If you don’t establish a clear foreground and background in your shot, your viewer will have no way of knowing how big or small the elements of your shot are in relation to each other. In fact, this blurring of foreground and background can be used to create special effects such as making a man, situated in the background and appearing very small, seem to stand on a woman’s hand which is placed in the very near foreground.


Despite its technical aspects and "rules," good composition remains an exercise in artistic taste. Beyond the guidelines we’ve outlined here, you can develop your own compositional style. Applying these guidelines will help you develop your visual sensibility and put you on the road to better-looking video.