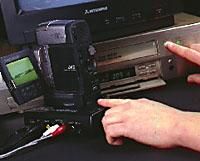 Though we usually talk about camera work in this column, this month we’re going to talk about a simple form of editing. Why? Because we all make mistakes, and it’s good to have a way to erase those mistakes before you show your work to family and friends.

Editing your work is a crucial part of the creative process, no matter what artistic medium you work in. It gives you the opportunity to review what you have created in rough form and hone it to its most cutting edge.

More specific to video, however, editing allows you to find and correct errors, strengthen weaknesses in your storyline, and refine the message you are trying to deliver. It likewise affords you the opportunity to simply polish your work until it shines.

Until now, you may not have had that opportunity to clean up your work. Maybe you’ve become accustomed to living with the footage you’ve shot, good or bad. Not anymore. Today you are going to learn how to edit your footage, using a simple technique we call "two-finger editing".

We call it "two-finger editing" because it is the simplest form of editing you can perform using two video playback/recording devices. It’s called two-finger editing because you are essentially using only two fingers at a time–one finger to play back the footage you have shot, and one finger to record that footage to your edited tape.

The setup is very simple. I’ll describe it in detail later, but basically you connect a video playback device–either a camcorder or a VCR–directly to a video recording device (usually a VCR, because many camcorders don’t accept input directly from another playback device) and a video monitor or television. For best results, make sure your recorder has flying erase heads. For ease of reference, we’ll simply refer to the playback device as the "player" and the recording device as the "recorder" throughout the remainder of this article.

Using the player, you individually cue up scenes–on any number of tapes–that you wish to record to your edit tape. You then record those scenes, one at a time, to your edit tape in the recorder.

In this way, you can re-arrange the order of your scenes, and get rid of bad footage you don’t want. That means you can build or "assemble" your scenes in order, one after another, recording new video, audio, and control track all at the same time, to create your new program. For this reason, this type of editing is referred to as "assemble editing."

Hooking Up Your Edit Suite


You probably already have a VCR hooked up to a TV in your living room. Simply wire up your camcorder to your TV/VCR combo and you have an instant editing suite.

How do you hook everything up? In short, connect the audio and video outputs on your player to the inputs on the recorder. If you have a choice between composite video and S-video cables, use the S-video cables, because you’ll get better copies that way (see Figures 1a and 1b).

Your VCR either has a switch or a menu setting that allows you to change input source. Use this switch to select "line input." This process varies from VCR to VCR. Consult your owner’s manual for the correct procedure for your particular VCR.

Let Your Fingers Do The Working


Now you are ready to begin editing. Let’s start.

Step 1: Pop your first tape of footage into the player and cue up your first scene. Review the scene in its entirety, so you know roughly when you want it to end. Then rewind to the beginning of the scene. Be sure to cue the tape to a spot a few seconds (five to 10 seconds depending on your deck) before the point where you want the scene to begin. This gives the tape speed a chance to stabilize before you start the edit. We call these few seconds "preroll time."

Step 2: Put a blank tape into the recorder. Record on it for about ten seconds–long enough to ensure some tape leader before the program begins–then immediately press the Pause button to put the deck into the Record/Pause mode. By doing this, you are creating a leader area on the tape before the program begins and engaging the record heads in the recording VCR. The tape will remain in the Record/Pause mode, however, until you are ready to actually record.

Step 4: When you reach the end of the scene, press Pause again on the recorder. This pauses the recording process until you are ready to return to step one and lay down your next scene.


Most modern camcorders also function as playback VCRs. How do you decide whether to use a camcorder or a VCR for playback? There are benefits to using each.

VCR controls are easy to use, and are similar from unit to unit. Many people have two or more VCRs in their homes, so equipment access is probably not a problem. And if you get really good, you can sit back on the sofa and do the whole edit using your remote controls. Be careful though, each remote control may operate both decks, especially if they are from the same manufacturer. This means that when you press the record button on the recording deck’s remote, the player deck may go into record also, erasing your footage–not good. It also means that when you release pause on the player deck’s remote, the recorder deck would start rolling too. Not as bad, but this still makes for bad edits.

I’d propose that using a camcorder for playback can be more practical and permit more opportunities for creativity. First, practicality. Most of today’s camcorders use compact, rather than full-size, VHS tapes. If yours is a VHS-C camcorder, then in choosing your camcorder for playback you avoid the hassle of using adapters to play your footage through a conventional VCR. In the case of 8mm camcorders, however, using a VHS VCR for playback isn’t an option. In this case, you must use the camcorder for playback. Secondly, disconnecting a VCR and moving it from room to room can be inconvenient. Camcorders are portable by nature, and therefore easier to move from place to place for guerrilla edit set-ups like this.

But wait, there’s more. Camcorders offer another benefit: the viewfinder. You can use it as a second monitor, cueing up footage for your next edit. It can be especially handy if your camcorder comes equipped with a large color LCD viewing screen, rather than a small, conventional viewfinder.

A real benefit to using a camcorder for playback is in the realm of creativity. With a camcorder, not only can you shoot new footage while you edit, but you can often do so while taking full advantage of your camcorder’s built-in special effects capabilities. Not all camcorders share the same set of effects, but the effects you do have at your disposal can help give your edited program a more professional look.

Why would you want to shoot while you are editing? Well, you may want to add titles. You can create these titles using posterboard or other materials, and shoot them as you need them. Better yet, shoot some still objects to edit into your program–maybe even some slides or photographs.

Let’s play this scenario out. You create an opening title graphic for your program: "My Kitchen Restoration." To open your show, you shoot your graphic, fading up from black first, recording about five seconds of graphic to your edited tape, and then fading out.

Next, edit in your video of still photos taken before your kitchen was remodeled. Thanks to your camcorder’s "sepia tone" effect, you can make the photos look very old. As a transition between photos, you might want to use your camcorder’s built-in wipe or dissolve effects.

Next, add footage you shot while remodeling, then close by again shooting a graphic–perhaps a list of credits, including your contractor, then slowly fade to black. It may not sound like you did much, but those few special effects will look mighty impressive to your audience.

Not Bad for Only Two Fingers


Editing video is every bit as important as shooting it. When you edit your video, you sand down the rough spots, remove the burrs, and polish everything up. Fortunately, this crucial aspect of video production need not be difficult. With the equipment you already have, including two of your fingers, you can create programs that look more like a professionally produced tape.