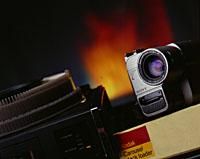 Now that spring has sprung it’s time to begin your annual cleaning of the garage, attic and hall closet. Once again you’ll uncover that box of old 35mm slides and the dusty projector.

That old slide projector probably doesn’t see too much daylight these days, does it? It’s not quite the dinosaur that some home movie equipment has become, but it is still relatively old technology.

Well, it’s time to introduce your old slides to your newfound video knowledge–bring them up to date, so to speak. How? By transferring them to videotape. Once you have your slides recorded on tape, its a simple matter to view them: just pop in the tape and press play.

The procedure itself is relatively easy, and by building on some of the knowledge you already have, you can make an otherwise boring slide show fresh and vibrant again.

The Tools of the Trade

The procedure for transferring slides to videotape is very similar to that used to transfer film to video (see Getting Started, January 1999). To prepare, you need to dig out that slide projector. And, of course, you need a camcorder and a tripod.

Dig out that screen, too. Don’t fret if you cant find it, though. A nice, flat white wall will do the job just fine. A colored wall will add its color to your projection, so make sure its white.

Set up the camcorder on your tripod, and situate the slide projector on some kind of support–perhaps a small table or even a TV tray.

Estimating how much videotape you need is really a no-brainer. In general, you probably need between five and ten seconds of tape for each slide you are going to transfer. Got 60 slides to transfer? You’ll need between 300 and 600 seconds–or 5 to 10 minutes–of tape. Your standard full-sized videotape–usually between 60 and 120 minutes in length–should be more than sufficient, unless you’re planning on transferring thousands of slides to tape.

To begin, set up the slide projector. Next, situate the camcorder and tripod just to the side of or just above and behind the projector. Don’t start recording yet, though.

Do a dry run first so that you can adjust your camcorder’s zoom. To begin the dry run, project a slide on the screen. Then turn the camcorder on and zoom all the way out. Look through the viewfinder, and zoom in slowly on the projected image. Stop zooming when the image completely fills the frame.

Now you’re ready to begin. Reset the carousel. Dim the lights; the darker the room, the better.

Usually, I like to record a few seconds of black at the beginning of my programs; it makes for a smoother introduction. Many older slide projectors, though, act like a spotlight when they aren’t projecting a slide. You probably don’t want to record a bright white spot on the screen, so I would suggest advancing the carousel to the first slide before you begin recording. Then, use the “fade” feature found on your camcorder (most camcorders have this feature) to fade up from black to the first slide. At this point, you have two choices.

Option one: continue recording each slide by simply advancing the carousel with the tape rolling. Record between five and ten seconds of each slide. Don’t give your audience the chance to wonder how long theyll be looking at a slide before getting to see the next one. When you reach the last slide, use the “fade” feature again to complete your program by fading to black.

Option two: if you want your program to look a little less like a slide show, pause the camcorder between each slide. Pausing will eliminate the slide projectors transition from one slide to the next. Record a few seconds, then pause the camcorder before advancing to the next slide. Varying the pacing according to the picture content and the music used will make your program more interesting. (More on sound later.)

Putting the Moves on Your Slides

The biggest danger you can run into when working with still images is putting your audience to sleep. Still imagery in a video program can pose a challenge to the most experienced video producer. How can you make sure that your program is holding your audiences attention? Try zooming in on details or adding camera moves as you shoot.

Begin by shooting your slide in its entirety. This shot will serve as an establishing shot, giving your audience a good look at the scene. Pause the camera and find something interesting on the slide to zoom in on. Perhaps you are shooting a slide of a wedding party. You might want to frame a closeup of the bride and groom.

With the tape still paused, frame your new shot. Roll tape, and record a few seconds of this tight shot. Pause again, and find something else that will make a good closeup shot. Repeat the process until you are ready to move on to the next slide.

Now that you’ve got the closeups you want, introduce some camera moves. This time, instead of pausing and zooming over and over, find something interesting to zoom in on, and pan or tilt the camera just a little bit before the shot. This movement may seem minimal in your mind, but in lieu of the alternative–stationary shot after stationary shot–the results can invigorate your video.

Always use camera moves judiciously, so as not to give the audience motion sickness. And always practice camera moves before you actually begin recording, to get your timing down. If youre editing in the camera, you’ll have only one opportunity to do it right.

Giving Voice to Your Slides

Slides don’t come with an audio track, but that doesn’t mean that your video slide presentation has to be mute. Putting audio into your presentation is not difficult, and will make your program more palatable for the viewer. You can add music, narration, or a mixture of both. Let’s look first at the musical track.

Many of today’s camcorders have jacks for external microphones. For the best quality audio, use an attenuator and an adapter to send the audio output of a CD player or tape recorder directly into the camcorders external mike input (see the August 1998 Tech Talk).

To add narration, be sure to use an external microphone instead of the cameras built-in mike, if you can. Most external mikes have a more balanced frequency response than the built-in mike. Using an external mike will also allow you to move the music source, and the microphone, away from the noisy slide projector, which is near the camcorder in our setup.

So how do you mix both music and narration? With an audio mixer. A simple $50-$100 model will work fine. Set up your music first; plug into one of the line-level inputs and adjust the volume so that it comes through clearly but still isn’t too overpowering. Then, as you record your program, speak slowly and clearly into the mike. Be sure to wear headphones so that you can monitor how well you are mixing your two audio sources.

Headphones are a key element in this and any other audio operation. By using headphones, you can monitor the audio as its being laid down to tape. If your soundtrack is coming through a bit too weak, just pump up the music volume a little bit. You can also get creative and fade your audio in and out by simply adjusting the volume of the music as it plays. Of course, if you are pausing the projector between slides or carousels, you will need to add the music later using your camcorder or VCRs audio insert or dub feature.

Regardless of your background or expertise, the process of transferring slides to video is easy and can really help you make otherwise dull slide presentations entertaining. Add in some camera movement and a soundtrack, and those silent images you project on the screen will come alive for your audience in ways you never imagined. And next year you can do your spring cleaning with a clean conscience.