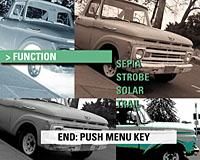 If it was produced in the last five years, your camcorder is likely to be full of chips–the silicon variety–all working silently and electronically to help capture the world around you and lay it down to tape for posterity.

Some of those chips do some really cool and funky things. Things like taking an image and enhancing it electronically, breaking it up, moving it around and changing its color. Enter the world of digital effects.

Fade to a Rainbow

Starting or stopping a program just by cutting in from black can be a bit abrupt. It’s more pleasing for the viewer if you fade in and out. Digital fade options give you just that kind of flexibility. (Technically, a large number of camcorders’ fade-to-black capabilities are not digitally rendered; they’re often created with an analog process that’s called "shunting to ground." Whether they’re digital or not, however, they are effects, so we’ll include them in our discussion all the same).

Most camcorders will allow you the basic fade to black. A lot of camcorders, though, will let you pick the color you want to fade to. By varying the color of your fades, you can create logical breaks within a program, or add a bit of artistic flair.


Sometimes freezing an image can add real drama to a scene. Imagine yourself taping a college graduation, and freezing the shot just as the graduates throw their caps into the air. Talk about capturing the moment!

Another benefit to recording freeze-frames is that many camcorders now act like digital still cameras, not only laying your stills down to tape but also holding them in memory so that you can download them to your computer as graphics. Two toys for the price of one! Some camcorders will also allow you to make a transition (dissolve or wipe) from a freeze-frame to moving video. This effect is called an A/X transition.

An Edit Suite in the Palm of Your Hand


Simply put, a wipe pushes–or "wipes"–another image off the screen, thus replacing it. A dissolve, by contrast, slowly fades one image out as the new image simultaneously fades in.

These functions can significantly contribute to the overall flow of a program, because they smooth over the rough transitions you might otherwise make by simply pausing the camcorder. They require more thought than any of the others described here, because they require you to begin editing, rather than simply enhancing, your footage.

How do these transition effects work? Unfortunately, you probably won’t have the luxury of transitioning from one live video shot to another. Most camcorders instead freeze the current shot and allow you to wipe or dissolve from that freeze-frame to live video again, the A/X transition.

The downside, of course, is that every shot must end with a freeze-frame. This kind of transition may get a bit tedious after a while, especially if you use it for every transition in a long program.


Strobe lights make everything look a bit mechanical because they only let you see your surroundings at measured intervals. You can get that same look using the digital strobe effect on your camcorder.

Digital strobe works by recording an image on two or more frames of video that would normally only occupy a single video frame. The result is the same as if you were shooting beneath a strobe light, but without the annoying flicker.

This effect is available in the interest of adding "fun" to your video. Again, though, think before you shoot. In normal shooting situations, the strobe effect may not be appropriate. For example, you don’t want to use this effect while shooting your cousin’s wedding anniversary celebration. That is, unless you want to inject a feeling of chaos and surrealism to your shot. Then it might work.

Suppose you are at a crowded wedding reception in a tiny hall. Being around a lot of people in a small space can make you feel claustrophobic and uncomfortable. You might want to later pass the misery you are experiencing on to your viewer. By using the strobe effect and jerking the camera around a lot, you can give the viewer a heightened sense of chaos. This imagery, combined with the loud noise of people talking and laughing, will be very disconcerting to the viewer. In this case, though, it is what you want. Like the disco strobe light, the digital strobe effect is most often used in conjunction with music.


Wide-screen recording is an option on many camcorders. When using this option, the camcorder does one of two things depending on how this feature is implemented: it either interpolates the image to a wider aspect ratio, or it simply chops off the top and bottom of your image, letterbox-style.

Those effects that actually change the aspect ratio of the shot (usually from 4:3 to 16:9) were specifically designed for playback on a wide-screen television. If you don’t have one of the new wide-screen televisions, you won’t have much use for this effect (unless you have some use for the look of 10 pounds of video stuffed into a five-pound bag).

The latter effect actually has more going for it than you might initially think. Though it doesn’t really do anything except paint a black stripe above and below the image, this look actually creates an epic-style feel, not unlike the broad panoramas of films created by John Ford or Cecil B. Demille.

I would recommend the wide-screen option not for general videotaping but for capturing unique occasions where the panorama of a wide-screen shot is preferable. Perhaps on a vacation you find a particularly exhilarating view. Maybe the Northern Lights you want to shoot are unusually spectacular. In these cases, wide-screen effects can help capture the awe of the scene.

Turn Back the Clock


Some digital effects can help you set the tone in telling your story. Two in particular that come to mind are black-and-white and sepia tone.

Black-and-white is exactly what it purports to be. Rather than recording your video in color, you can go back to the Golden Age of Television and lay down some good ol’ fashioned grey-scale imagery. Black-and-white is an excellent medium for showing contrasts. It can also be used to capture some of sinister qualities of old horror movies, or film noir.

Sepia tone is a similar effect that applies an antique brown color to your video. It’s like black-and-white, only it looks more "brown-and-white", like a hundred-year-old photograph. The sepia tone effect is intended to make your video–or your subject–look very old.

Regardless whether you choose black-and-white or sepia tone, both can imply that the subject of the program is old or that the video itself is old. You might want to use them if you are developing a family history video. Shoot old photographs–even color ones–with these effects to give them a nostalgic look. Shoot titles on posterboard this way and you’ll have the effect of an old-fashioned silent movie presentation.


Like all video effects, digital or otherwise, you are not limited to using each of them by themselves. Combining them appropriately is what really makes for outstanding video.

Let’s say you are shooting a shuttle launch at the Kennedy Space Center. You open your program by fading up from blue to the beautiful, cloudless blue sky. Beginning with a wide shot of the shuttle, you zoom out to capture the lift-off, you freeze the shot as the shuttle rises into the sky. You dissolve to a close up of the crowd as it cheers. You close your video later by dissolving among black-and-white photos and news clippings of the launch. It’s (sniff!) a thing of beauty.

So just remember that the rules of good video still apply: digital effects are not there to make up for bad video, nor are they to be used indiscriminately. The best way to avoid shooting poorly and ensure the proper use of your digital bells and whistles is proper planning and good judgment.