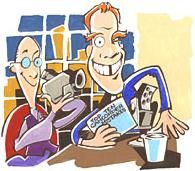 Every month the editors at Videomaker Magazine try to teach you the skills you need to become a better videographer. But it seems the best way to learn is to make mistakes. So without further delay, let’s take a look at some of the most common mistakes made by camcorder users. Videomaker‘s Top 10 Reasons Why Nobody Likes to Watch Your Videos.

Number 10: Five minutes of Grandma knitting
a sweater is 4 1/2 too many.

A sure-fire way to bore your audience is to show them the equivalent of a video snapshot. Shots with little or no movement bore viewers quickly. Because video is a dynamic medium, motion is essential. The best way to keep your audience’s interest is to keep things moving or keep your shots short.

Some subjects are stationary. If you have to shoot a still object, say a Corvette parked at a car show, keep it short and sweet. Don’t make your viewer ask themselves, "How much longer?"

Camera movement can help liven things up. A mountain range is stationary, but doesn’t have to be boring. A slow pan across the range makes the shot dynamic and adds interest by showing the size and scope of your subject.

Number 9: Your footage looks like surveillance
video from the local Speedy Mart.

Another way to put your viewers to sleep is with stationary wide-shot video. You usually see this with party and family gathering videos. The camcorder is placed on a tripod, set on a wide shot and left to roll until the tape runs out.

It’s bound to shoot something interesting, right? Wrong. This makes for one long uninterrupted shot with only occasional movements across the field of view. Most of the people in the picture are tiny and the audio is nothing more than a vague murmuring.

Good video tells a story. A good story has a plot; if you just roll tape aimlessly, without shooting anyone or anything in particular, your story will suffer for lack of focus. And your audience will "check out" until the lights come back on.

Number 8: Your videotape has more snow
than Donner’s Pass.


Blank videotape from the store has absolutely nothing recorded on it. Play it through a VCR and you get static and snow. Because of this, the recording heads inside your camcorder make sure that, when you pause the tape during recording, they pick up right where they left off. No gaps between shots and no snowy static.

But many camcorders have big viewfinders and viewing screens for playing back footage right after you shoot it. It’s a great feature if you’re on the go and want to watch your videos right away.

There is a downside, however. If you playback your footage before you are done recording on a tape you may cue it up wrong and create those dreaded snowy gaps. These interruptions break the continuity of your video and you risk marooning your audience for good.

A good way to make sure that you have cued the tape properly is to use the edit search button on your camcorder. When you press this button, which is included on most camcorders, the tape is then rewound or fast-forwarded and cued to the end of the last recorded spot. Take a minute to do this before hitting record to avoid any miscues that could lead to unplanned blizzards in your tape.

Number 7: Your constant chattering
drowns out all other sound.


Many videographers feel the need to talk about what they’re shooting. But all too often the on-going narration from the camcorder operator drowns out the sounds of a shot. The result is a soundtrack jammed with irritating chatter. A jabbering camera person can make even the best footage a chore to endure.

Video, by its very nature, narrates itself. You have the luxury of capturing pictures with their corresponding sounds. Remember, a picture is worth a thousand words and your video is recording thousands of pictures. You could never keep up with this pace. Let your video speak for itself.


Often videographers ignore lighting techniques that are critical for successful video. A big mistake is shooting a subject against a very bright background. The effect? A dark silhouette. As a rule, never shoot your subject with his back to the sun or a window.

Most camcorders, regardless of their lux rating, are not very responsive to low levels of light. Try shooting a six-year-old blowing out the candles on his birthday cake. Your camcorder’s auto iris adjusts to the bright, flaming candles and leaves your guest of honor in the dark. Instead, turn on a light or two to capture that precious shot.

Number 5: Music videos from the
early 80s have more continuity.

Like we said earlier–your video has to tell a story. You have an entire reel of short snippets that could have each told their own story, at length. You chose instead to give them the attention of a panicked gnat.

If something is worth shooting for a few seconds, then it is worth shooting for a minute, or more. Again, these are not photographs, they are a string of visual images. Shoot a couple seconds from one angle, then move the camera and shoot some more. Don’t just take pictures randomly. Tell a story. Your viewer will thank you for it.

Number 4: You treat your viewfinder
like a rifle scope.


Hey, buddy, you’re a videographer, not a sniper. Do you see cross-hairs in your viewfinder? Of course not.

One of the first rules they teach in TV Production 101 is the "Rule of Thirds." Imagine your screen divided into thirds, both horizontally and vertically. Do this and you get an imaginary tic-tac-toe board.

Position the things you shoot on the lines of the tic-tac-toe board, and your shot will have better balance. Don’t take it as gospel, but as good advice. Move your subject out of the center of your shot and your scene will be more pleasing to the eye and more interesting to the viewer.

Number 3: You zoom more than a street rod
on a Saturday night.


This may be number three on the list, but it’s a number one no-no. Zoom lenses on camcorders should be used to zoom-in on faraway objects and stay there. Many people zoom-in, zoom-out, zoom-in again, zoom-out again, etc. It’s a dizzying habit.

We all know what they’re trying to do; something looks interesting and they want to draw attention to it. They’re really just drawing attention to the lens movement.

Use the zoom on your camcorder wisely, and sparingly. When you do choose to zoom, make sure you have a clear beginning, middle and end to your shot. And resist the temptation to back off right away. Try using the zoom to frame your shots before rolling tape.

Number 2: The inside of your camera bag
is the star of your show.


We’ve all done it, so don’t be ashamed. You’ve just recorded your grandchildren in the park and you’re heading for the car. You don’t realize, though, that you forgot to pause the tape. When you get home, you discover that you’ve shot 15 minutes of the inside of your camera bag (or maybe of your feet and the car seat).

It’s easy to forget something as simple as pausing the tape between shots. Nonetheless, these extended periods of darkness make you look like an amateur, and can put your audience to sleep. So take your time, stay alert and push pause when you’ve finished your shot.

Number 1: Your footage produces more motion sickness than the Tilt-A-Whirl.


The biggest mistake most amateur videographers make is not holding a shot steady. People walk, jog and bike with their camcorders these days. They whip their cameras around and, before long, your viewer is green and asking for directions to your bathroom.

A lot of camera movement
–and we’re talking about uncontrolled movement here–has a dizzying effect. Concentrate on holding the camera steady. Stand still, bend your knees slightly, hold the camera with both hands, and whatever you do, don’t turn away suddenly. Hold your shot long enough for you to know what it is. Then press pause before moving on.

Steady footage is the first step toward excellent video. If you remember nothing else from this article, remember to hold your shots steady.

Will We Ever Get It Right?

You’re going to make a lot of mistakes learning to make video. But by remembering the mistakes you used to make–hint, hint–you can remember the ways to avoid those flubs in the future.

You can never know what good video is without first knowing what it isn’t. Enter your mistakes. Here’s to their memory.