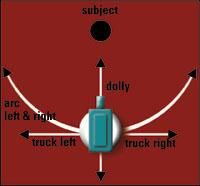 Camera moves that will help you to make better videos

When it comes to adding action to your video, Im a big advocate of keeping the camera absolutely still while shooting an action-packed scene. Too many amateur videographers try to add movement to their footage by zooming in and out, or otherwise moving the camcorder unnecessarily. The result is usually a shaky-looking program that makes your viewer want to reach for an antacid.

There is a right way, however, of moving your camera while still keeping your shot steady. By employing the right tools and techniques, you can add drama and style to your footage in a way that is not patently distracting.

The Language of Movement
Before we start, lets talk a bit about the terminology used by the pros to discuss camera movements.

There are six basic camera movements you have at your disposal. They are the pan, tilt, dolly, truck, arc, and pedestal.

You are no doubt already familiar with the pan and the tilt. With these two moves, the camcorder pivots from side to side (panning) or up and down (tilting) to follow the action. If you are holding the camcorder to your eye, panning and tilting is as easy as moving your head and arms.

Theres actually very little movement involved in a pan or a tilt. All you are doing is changing the angle of the camcorder with respect to horizontal or vertical positions. You most likely dont have to move yourself at all.

The terms "dolly" and "truck" are often used interchangeably. This is because the equipment used in television studios to perform each of these moves is sometimes called a dolly. It is kind of a high-tech tripod with wheels.

When you dolly and truck at the same time, the result is a movement called an arc. When performing an arc, you and the camcorder move in a semicircular fashion around your subject.

Finally, there is the pedestal. To pedestal means to raise or lower the camcorder–actually alter the units elevation–with respect to the ground.

As with dollying, this term is also derived from standard operating procedure in a professional studio. Dollies are also called pedestals, and the raising or lowering of the cameras on these pedestals gave birth to this camera move.

Mix and match these six camera moves and youve got the makings of some dramatic footage.

Get a Move On
So do you need a lot of fancy equipment to make these moves a reality? Absolutely not. As Ive already said, panning and tilting are usually as simple as moving your head. You can, and probably do, also use your tripod, to make these moves.

But what of the other moves? When I was a professional videographer, I was often asked to make videos on a shoestring budget. Even I, as a professional, often did not have the luxury of renting some of the more exotic equipment available for clever camera moves. But that didnt stop me.

Hello, Dolly
In one case, I needed to get a shot of an entire office. I could have tried a high stationary shot that panned the office from one side to the other. What I really wanted, though, was something that was going to personalize the workers. I decided to take the camera through the office, down the aisles and around the cubicles.

I tried walking with the camera, but the end result was too jittery. There are cases in which jittery is good; watch "Cops" one night and youll see how the unsteady camera movements add to the feeling that the camera operator is right in the middle of things.

What I finally did was go to the first aid room and borrow the wheelchair. I sat down in it , and my assistant wheeled me slowly and steadily through the office. Afterward, I looked at the footage and realized that the angle from which I was shooting was a little too low. No problem, I thought. I just put a short 2"x6" board across the arms of the wheelchair and sat on that. The footage was just as steady, and the angle was more reasonable.

In general, any device with wheels will work as a makeshift dolly. Office chairs work great in a pinch. I once even sat on a piece of plywood while my assistant pushed me along a conveyor. Hey, it wasnt one of my proudest moments, but I got the shot.

The real key to keeping your shot steady throughout the duration of the camera move, however, is to make sure you are on a smooth surface. Sitting in a wheelchair while being pushed along a gravel path will still give your footage the shakes. A nice even surface, like vinyl flooring, or even cement and asphalt, usually works best.

Speaking of asphalt, you most likely have access to a very expensive dolly right in your own garage. Thats right, your car can work as a dolly for you if you want panoramic outdoor shots you can take from the street.

Its best to have someone drive for you, while you sit in the passenger seat. I have driven my car and held the camcorder at the same time, but it is a bit of a juggling act. One hand stays on the wheel while the other has to hold the camcorder. The fact that only one eye stays on the road, while the other is glued to the viewfinder, can make such a stunt dangerous, too.

Always zoom out to a wide shot if you are shooting from a car. Your shot will get very blurry very fast if you zoom in too tight. It is also a good idea not to pan or tilt the camera if you shoot from a car. The motion of the vehicle will provide more than enough movement to keep your shot interesting.

Movin’ On Up
Okay, now that you know how to move back and forth, what do you do if you want to go up and down?

If you were a pro, you would probably rent a crane. Professional video cranes are usually hydraulic monsters that allow a camera operator to ride up and down as necessary to get the shot. You, however, have to take advantage of equipment at your disposal. Youd be amazed at what you can do with your own body, however. If all youre doing is moving up and down, your legs can provide you with a great deal of stability throughout the camera move.

Simply assume your usual stance for a stationary shot. Place your feet shoulder width apart, knees slightly bent. If your shot needs to go down, just squat slowly downward as you let your subject ease out of the frame. If your shot is coming up, start from a squatting position and rise so that your subject ends up in the frame.

Depending upon how sophisticated your tripod is, you may be able to use the crank that raises and lowers the camcorder to pedestal up and down. Most consumer-grade tripods, however, are not steady enough to accommodate such a move without shaking the camcorder and ruining your shot. Larger, heavier tripods work better in this case. You’ll have to experiment to see if this will work for you.

Be Creative and Smart
As a rule of thumb, you need to be creative in implementing your camera moves. You most likely won’t have professional equipment at your disposal, and that’s okay. Just improvise.

Be safe, too. You may have noticed that I have done some unsafe things in the interest of getting the shot. I don’t recommend these things; I admit now that they were stupid things to do. Remember, folks, it’s only video, and it isn’t worth risking your life for.

Finally, remember that too much unwarranted movement can ruin otherwise good video. Be sure to pick and choose your camera moves appropriately. And if you are ever in doubt about a camera move, "just stay still."