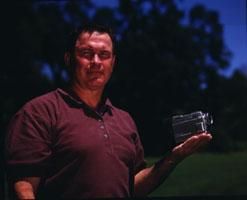 There are a lot of great things about today’s camcorders. Digital recording and big viewfinders are just the tip of the iceberg. In my opinion, the best thing about modern camcorders is that they have become so small and portable. This means that you no longer have to lug a big videotaping contraption all over the amusement park. Your new camcorder can simply hang from a strap around your neck or over your shoulder and is so light you won’t even know that it’s there.

This huge benefit in portability has been carried over into many accessories. Batteries are small and lightweight; tapes have moved from full-size to compact. There’s one bastion of bulk left among camcorders and their accessories—the tripod.

Oh, sure, it’s gotten lighter and those cool telescoping legs are mighty impressive. But today’s tripod is still bigger than an umbrella, and not quite so easy to set up when you’re in a hurry.

So you have a dilemma. You want nice, steady pictures but you don’t want the trouble of carrying a tripod with you. What’s a videographer to do?

Steady, friend. And I mean that literally. You’ve got a perfectly good body. Learn how to carry yourself and your camcorder properly and your footage will be mah-velous.

Let’s start with the basics of how to hold yourself when holding your camcorder. You may think that by standing absolutely rigid, like a video-crazed Frankenstein monster, you will be able to minimize jitters and have a nice, steady picture.

Quite the opposite. If you stand at attention, you’ll look really dapper, but you’ll be really uncomfortable, too. You will also be completely unprepared to react to outside forces, like the wind, for example. Just try to move a little. You say you can’t? Then how are you going to be able to follow the action with your camcorder? It’s much better to remain fluid and relaxed. Stand with your legs about shoulder width apart. Have your feet firmly planted on the ground. Bend your knees ever so slightly. Feel a little springy? You should.

Think about how many athletes use this stance in various sports, like golf, tennis and baseball. It puts them in a position to move quickly and to follow the action. It also turns them into a flesh-and-bone shock absorber.

It’s ok to take a hint from these athletes. If someone bumps into you or if the wind picks up, you’re body is ready to absorb the shock and not transfer too much of it to your camcorder. Most importantly, though, like a tennis player waiting for a volley, you will be in a position to follow the action.

Next rule: always keep both hands on your camcorder while you are shooting. Camcorders come in two basic varieties. There are full-size camcorders that use full-size VHS tape and rest on your shoulder during shooting. Then there is the compact camcorder, which is essentially a much smaller version of the full-size unit.

Each of these camcorders is stable in varying degrees. The full-size units are the most stable, because they are heavier and your shoulder can support them. Compact camcorders are small and light but must be supported entirely with your hands. This makes shots a little shakier.

Regardless of the size of your camcorder, it should always be held with both hands. Simply put, two hands are better than one. The more support you put beneath your camcorder, the more stable it will become.

When holding your camcorder in front of you, try to keep your elbows close to your chest. By doing this, your chest can help take some of the load off of your arms when you shoot.

See how you are at transforming yourself from a person with a camcorder into a videotaping machine?

You need camera moves to make your video interesting. The quickest way to bore your audience is to zoom in really tight on a stationary object and not move the camera for five minutes. Camera moves are often easier with a tripod, but you can do just fine without one. You’re a videotaping machine, remember?

If your stance is like the one described earlier, you are all ready to move with the action. It’s just a matter of following it when it occurs. There are a few guidelines, though, that can help keep your footage free of jitters and make it a lot more interesting to watch.

First of all, use your zoom sparingly. Sure, you’re stable; yes, you’re a machine, but you’re not made of stone. Your breathing alone is enough to shake the camcorder just a little. The tighter you zoom in on a moving object, the more obvious these little jitters will become. Take a lesson from marksmen: take steady, long, slow breaths instead of short ones to steady yourself even further. If you want to hold your breath and use meditation to reduce your blood flow, that’s your business. I would suggest, however, that it may be easier just to stay zoomed out to a wide or medium-wide shot.

The most important part of shooting video is getting a good shot of everything. Watch your nightly news sometime. You’re bound to catch a helicopter chase sooner or later. The camera operator will almost always stay zoomed out, wide enough to see the runaway bus and the twelve squad cars chasing it. He could zoom in if he wanted to, but since he’s got a camera on his shoulder shooting from a hundred feet in the air in a helicopter traveling at a high rate of speed, he knows how jittery things could get. He’s more concerned with getting a decent shot of everything than a shaky shot of just one thing.

If it is imperative that you get a close-up, you have an option. Zoom out as far as you can go and physically take the camera up close to the subject. By moving the camera and not using the zoom to get close, you can keep jitters to a minimum.

Suppose you know you are going to have to pan the camera to get the whole shot. You’re at the drag races, for example, and you want to follow your favorite dragster out of the gate down the strip in front of you and on to the finish line.

Ooh, how you miss that tripod! How do you follow the action without dancing around with the camcorder, or worse, tripping or falling and missing the shot completely?

It’s easy, you don’t have to move your feet to get this shot. All you really need to do is smoothly swivel your upper body as you aim the camcorder.

If you know the action will be moving from far right to far left, position yourself, in your stance, somewhere in between. Keep those feet firmly planted on the ground. Then twist your body slightly to the right and aim your camcorder at the starting point. As the action moves toward you, slowly turn your upper body with it, following the event with your camcorder. Then turn your upper body the other way as the action moves past you.

With this technique, you are able to keep your balance while comfortably following the action as it unfolds, keeping those shaky shots to a minimum.

Should you use your zoom? Panning from one side to another is plenty of action for one shot. You might, however, consider zooming out as wide as you can before you start shooting. Then leave the zoom alone. Let the action that you are shooting dictate your shot for you.

A Proposal: Get Down On One Knee

A technique that I’ve used for shooting low angle shots with compact camcorders is to squat down on one knee and cup the camcorder with both hands. Swivel the viewfinder so that it points straight up at you. Position the camcorder in your hands to frame the shot. Then look down at it like it’s a little TV.

You will find that your shot is really quite stable, due in a large part to the fact that you have lowered your center of gravity. Try resting your arms or hands against your legs for added stability.

Don’t Use That Tripod As A Crutch!

You see? You don’t need that bulky tripod as much as you thought you did. Save it for shooting, when you have plenty of time to set up. But, when you’re on the go, you will find yourself to be a perfectly stable platform for your camcorder—far more fluid and mobile than a tripod could ever hope to be.