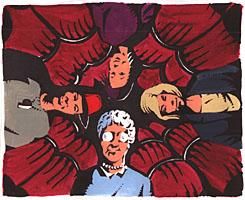 Four questions you should ask yourself before you
hit that red record button.


Some of the wisest words I’ve ever heard as a videographer came from the
Master of Ceremonies at a friend’s farewell party. As a few guests prepared
to step up to the microphone to give good-bye speeches, the MC spoke the
following words of advice that I will now pass on to you as fellow crafters
of video. "Keep in mind the five Bs of public sharing," he said.
"Be brief, baby, be brief." Simple words really, almost comical,
but so profound.

Keep it short. Make your point. Don’t take more time than you need to tell
the story. The principle is to be kind to your audience. Audience appreciation
is a skill we must all learn if we hope to please those who watch our tapes.

For the sake of your future audiences, ask yourself a few questions the
next time you get ready to press that red record button on your camcorder.
Answering these questions will help insure that your videos won’t leave
your viewers confused, bored or worse yet, snoozing until the credits roll.

To make videos that hold the interest of your audience you need to understand
who is watching them. As camcorder users we tend to assume that because
we enjoy making videos, others will enjoy watching them. It’s easy to focus
so much on the process of making a video that we forget someone else has
to look at it. The reality is that something we view as a thing of beauty,
our masterpiece, can go completely unappreciated by our audience. The problem
here is ours not theirs. Why? Because if our goal is to communicate something
to an audience, it’s our responsibility to do it appropriately. Knowing
who will watch your finished video directly affects the way you will approach
a project.

Consider the seemingly straightforward topic of fire safety. While any fire
safety video will contain similar facts and techniques for escaping a blaze,
a video made for junior high students will look and sound much different
than one made for residents of a retirement community. When you realize
that you make video for your audience, not yourself, you are on the road
to being kind to your audience.

Where will It Be Watched?

It helps to know the forum in which your video will be shown. Are you making
something purely for display on the TV in your family room or will it be
seen somewhere else? Maybe a group of students will watch the tape on a
small monitor in a classroom or a crowd of several hundred will see it on
a big screen at your club meeting. Does it really make a difference? You
bet.

A video created for a large group setting requires special shooting. Most
of your viewers will be sitting at a greater distance from the screen than
if they were watching the tape from the couch in your den. Huge screens
allow you to use wider shots. Because images will be gigantic on the screen,
you don’t have to shoot them so large in the first place. An interview shot
in extreme closeup, for example, will translate into an immense head on
a 15-foot screen. A piece created for small-screen display to a group of
people, however, will cry out for closeups. Viewers forced to look at the
monitor from a distance will have to strain to see facial expressions and
details if you don’t shoot the video with these viewing conditions in mind.

Open any TV 101 textbook and you’ll find that there are three distinct purposes
for 99% of all TV and video: they are to inform, to instruct or to entertain.
The goal of the Action News Team is to inform the viewer about news and
weather. The Bouncing Gourmet seeks to instruct his audience as he teaches
the viewer, step by step, how to create each delicious dish. Sitcoms and
game shows are designed purely to entertain the viewer.

Other programs don’t fall easily into just one category. While the rule
isn’t set in stone, the fact is that anything you videotape will fall into
one, or a combination of these categories. And while it is relatively easy
to determine the purpose of a professionally produced, nationally broadcast
television program, it isn’t always easy to understand the purpose of a
hobbyist’s home videos. Why? Because most of the time we run our camcorders
without stopping to think about why we record the things that we do.

Let’s say I whip out my camcorder to shoot some footage of my dog, Mocha,
zipping around the backyard chasing her ball. Hold it! First I need to ask
myself why. The way I answer will dictate the way I shoot my dog. (Oops,
that didn’t sound too good. Let me finish this quickly before the ASPCA
shows up to take me away.) Maybe my goal is to preserve the moment for my
parents so they can see how big our pup has grown and how playful she has
become. My purpose? Well, while I certainly hope they find the tape entertaining,
my real goal is to inform them about Mocha’s growth and her playfulness.
To communicate this on tape, I might start with a shot of my wife, Cris
saying hello and explaining that we are making this video so they can see
Mocha retrieve her ball (which she holds up) on this extraordinarily playful
afternoon. Next I cut to a shot of Mocha playfully awaiting the throw, followed
by a shot of Cris tossing the ball and Mocha giving chase. Finally, a closeup
of the pooch racing happily back with the ball in her mouth. Had I not included
my wife’s explanation at the head of my sequence, my parents might wonder
why I was sending them this crazy ball-chasing scene. Notice that while
it only took a few seconds to explain the "why" of my tape, my
viewers are now prepared for what follows. They know exactly what I want
them to look for.

How Long is too Long?


Length is always an issue for videographers. For some reason camcorder
users seem to believe that longer equals better. They couldn’t be more wrong.

You’ll find that the attention span of most video
audiences is 10 to 15 minutes maximum, and that some of the best videos
are even shorter than that. TV commercials are fantastic models for camcorder
users to follow. They move quickly. They grab your attention. They deliver
a clear message to a defined audience. And more often then not, they entertain.
With only 30 to 60 seconds of time, each shot must be carefully selected;
each edit made with purpose. Does this stifle creativity? No chance; in
fact, the most creative work on TV often appears during the station breaks
when many of us are making a run to the fridge.

So why do so many Getting Starters make videos that
are 20, 30, 50 and 60 minutes long? This tendency, I believe, is the result
of a few realities. To start with, the typical videotape costs around two
bucks and holds as much as two hours of footage. The result is excessive
shooting. I guess the logic is, "Why not? I need to use up all this
tape."

Another misconception is that it’s necessary to shoot absolutely everything
that happens at an event. The truth is that TV and film producers don’t
even try to do this. The key is to look for highlights that capture the
essence of the occasion. Rather than include the entire three-hour wedding
reception in a video for a friend, include only the important events: the
cutting of the cake, the couple’s first dance, the toast, throwing the bouquet
and the happy pair waving as they drive away. A three-hour time span summarized
in five minutes of highlights is very appealing to the viewer. Add some
romantic music and you’ve got a moving remembrance of the event.

Lastly, we are conditioned by the length of the things we are accustomed
to watching on our boob tubes and at the theatre. While these lengths are
appropriate for television and film (remember what we’ve already said about
our audience, forum and purpose), two hours of home video can be maddening
for even an interested viewer.


Be kind to your audience. Keep it short. Make your point. Shoot highlights.
Know who will be watching, and treat them appropriately. Next time you shoot
your dog give yourself a 60-second time limit to tell the story. It’s much
more fun to have people ask you to rewind the tape for an encore than it
is to wake them up when it’s over. By the way, "WAKE UP!" I’m
done.