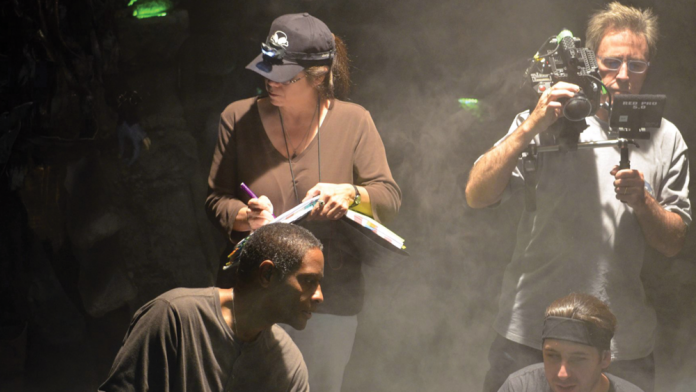 Script supervisor is one of the few positions where you shouldnÃ¢ÂÂt scrimp. Right now you may be thinking Ã¢ÂÂour script knows its job and doesnÃ¢ÂÂt need a supervisor or a manager.Ã¢ÂÂ If so, youÃ¢ÂÂre missing the point.

Another terms for the role of script supervisor is continuity supervisor, which, although used less often, is a more accurate definition of the role. The script supervisor is the person who takes copious notes on the set, which will find their way to the editor so that post-production runs smoothly. At least, thatÃ¢ÂÂs the primary definition of the job. In reality, theÃÂ script supervisorÃ¢ÂÂs job is to save the directorÃ¢ÂÂs ass, and that job begins not during production, but very early in pre-production. And it ends when the film is completed. So, do you need a script supervisor for your production? The short answer is Ã¢ÂÂyes,Ã¢ÂÂ but we know thatÃ¢ÂÂs not good enough, so hereÃ¢ÂÂs the more detailed answer that should help you make the right choice:

Robert Moon, who has worked on more than 40 projects and is currently the script supervisor for MADtv, explains that, Ã¢ÂÂWhile there are actually many disparate duties a script supervisor performs, the most important one is to work as the on-set editor to ensure the project can be cut with a minimum of mistakes. He or she is the firewall against eye line mismatches, jumped dialogue, and continuity errors from every department. She is often the only advocate for post-production during principal photography and makes sure the editing team gets the material it needs in a way that is easily understandable and digestible.Ã¢ÂÂ

First, theÃÂ script supervisorÃÂ will need a copy of the script to do breakdowns, including:

The longer your script supervisor has the script, the more breakdowns sheÃ¢ÂÂll be able to do and that will save a lot of effort during principle photography. The assistant directors will also work closely with the continuity supervisor. Together, they work on shot lists, schedules and breakdowns.

Robert explains Ã¢ÂÂAn enormous amount of work goes into prepping and breaking down a script during pre-production, and I cannot emphasize enough the importance of this prep work. Without it, a script supervisor absolutely cannot properly guard against continuity errors once the cameras start rolling.Ã¢ÂÂ

You should always have a script supervisor on set, even if youÃ¢ÂÂre shooting a commercial with no words. Robert explains, Ã¢ÂÂDuring and immediately after each setup, I write notes to the editor describing the shot, what was covered in each take, noting any problems with dialogue, sound, continuity, etc., and how long the takes were.

You should always have a script supervisor on set, even if youÃ¢ÂÂre shooting a commercial with no words.

Ã¢ÂÂAt the end of each day, I generate multiple reports that get sent to producers, the studio, post-production, the 2nd AD, etc. There is an EditorÃ¢ÂÂs Log, a Production Report, a Coverage Report, the facing and lined script pages, a Timecode Log and more. In my Production Report, I list every setup we completed, the camera and sound rolls used, the screen time that was fully or partially credited, the time differential between the estimated running time and the actual running time, our first shot, wrap time, etc.Ã¢ÂÂ

We asked Andra Hayes, a script supervisor with 28 years of experience and more than 120 projects to her name, what she and other professionals do during a shoot day Ã¢ÂÂ and this is the short answer: Ã¢ÂÂThe duties during production can be overwhelming. We assign the slate numbers, time each take, record what the shot was, what the camera saw, what happened during the take, whether it was good or not, complete or incomplete, if the director liked it or not, if it is the take to use in editing, what dialogue was said or not said, what dialogue was changed. We keep track of camera rolls and sound rolls for each take. We fill out the edit log which is a summary of everything shot, and the daily report keeps track of the total number of scenes shot every day, in full or in part, the pages shot, the total screen time, the number of set ups shot. We keep track of what wardrobe each character wore and how they wore it in each scene. We keep track of the props that were used and how it was handled in each scene, hair and makeup for each scene, set dressing, lighting, and track the continuity throughout the film. We keep track of what was shot and make sure everything that needs to be shot is shot. We watch for matching and continuity for motion and action. We refer to the script as to what is supposed to be shot. We record changes that are made as we shoot. We help to make sure things will flow and work in editing. We catch problems, errors and mistakes so they can be corrected in the field. We follow the story and make sure it is adhered to and that there are no conflicting situations. We offer ideas, suggestions and options. We are the ProducerÃ¢ÂÂs and DirectorÃ¢ÂÂs eyes and ears, the EditorÃ¢ÂÂs advocate. We are the safety valves on set. We do all or any of the above as needed on sets…and more.Ã¢ÂÂ

All of these detailsÃÂ  ensure that, if a scene is to be continued or re-shot, all of the aspects of the shot can be replicated. Remember, movies scenes arenÃ¢ÂÂt shot in sequence. A continuation of a scene could be weeks or even months away and everything has to flow smoothly.

Although theÃÂ script supervisorÃ¢ÂÂs job is usually finished around the time that the film goes into post-production, the editor or sound editor could have questions that only the script supervisor can answer. However, if theÃÂ script supervisorÃÂ took proper notes and the editor can understand them, there will be no need for a text or call during post. Andra explains that Ã¢ÂÂif you do your job well in the first 2 stages of production, you may not hear a thing during this stage of filmmaking. Your notes will be so good they will never need to call you.Ã¢ÂÂ Any good continuity supervisor will of course make himself available during post, just in case there is a communications issue.

What makes a great script supervisor?

But thereÃ¢ÂÂs more to this job than just the technical aspects and organizational skills: Although a continuity supervisor is one of the most important crewmembers on the set, they are also the one that faces the most resentment, which is something that a script supervisor is going to have to work with. Throughout society, people donÃ¢ÂÂt like being told what to do and that resentment is amplified on a movie set.

Perhaps itÃ¢ÂÂs because the position is almost exclusively held by women Ã¢ÂÂ the term Ã¢ÂÂscript girlÃ¢ÂÂ was derogatively created for the role decades ago. According to the Los Angeles script supervisor union, IATSE Local 871, 94% of its members are female. This is the opposite of what youÃ¢ÂÂll find in most positions on a set.

Robert tells us that the sexism is fairly obvious to him, stating that, Ã¢ÂÂThere have been shoots where men have come up to me to express how relieved they were to finally see a male script supervisor, followed by horrifically sexist remarks about female script supervisorsÃ¢ÂÂ¦ The recurring theme is their obvious resentfulness at a woman pointing out their mistakes.Ã¢ÂÂ

Andra explains that Ã¢ÂÂThe role itself hasnÃ¢ÂÂt changed. We still take edit notes and watch for continuity issues. What has changed is that there are more directors that donÃ¢ÂÂt know what to do with us or choose not to utilize us. But that is them, not us. They donÃ¢ÂÂt realize we are department heads there to assist them in making a fabulous project. They cut the wrong corners, donÃ¢ÂÂt listen to onset advice, and ignore the experience of the department. The directors that do understand our role utilize us and let us help them make a great project. The thing that has changed is the equipment used, the equipment of other departments, the medium used.Ã¢ÂÂ

She goes on to explain, Ã¢ÂÂFor other departments, we have to keep up on their technology so we can gather what we need to pass on to the Editor. For our department, some script supervisors work on good olÃ¢ÂÂ pencil and paper, others work digital. They have laptops, iPads, script supervising software or self-made digital forms, video capture, digital photos.Ã¢ÂÂ These new technologies all assist in speeding up the process of making movies and eliminate mistakes, ultimately saving the production a lot of costs in the long run.

Script supervision is a very important aspect of filmmaking and shouldnÃ¢ÂÂt be taken as lightly as it is, so if you want to save your production a lot of money, you really should hire a script supervisor for the job!

John McCabe is a Los Angeles based screenwriter and director and owns Never Say Cut Media. He can be reached at john@neversaycut.com