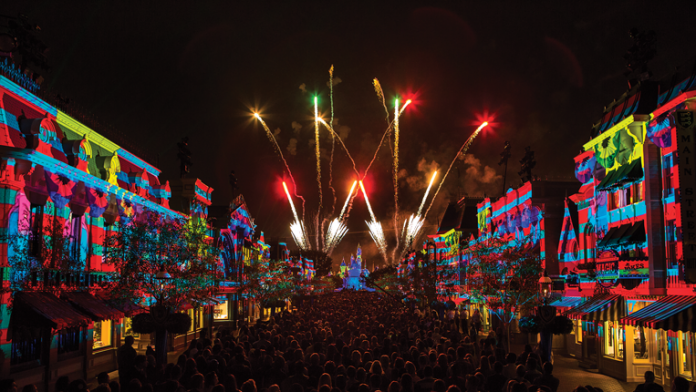 In a process called projection mapping, a 3D model of a building is made, then this model or map is entered into special software that allows video designers to “wrap” images that are projected back onto the original surface. This requires very high resolution, high lumen projectors and often more than one projector to cover a large surface. The result is a stunningly clear image and new levels of creativity.

When it comes to creativity and innovation, the Walt Disney Company often leads the way. We spoke with Chuck Davis, Principal Technical Director at Creative Entertainment for Walt Disney Parks and Resorts, and he told us that the concept was actually born in Disneyland.

Disney pioneered the process of taking specific imagery that is designed to highlight or augment or work with the surface that it's projected onto.


There are three singing statue busts in the Haunted Mansion, which debuted in 1969. Originally the illusion was done by projecting a head shot of the singer that was perfectly cut out to match the surface. Chuck tells us, "Disney pioneered the process of taking specific imagery that is designed to highlight or augment or work with the surface that it's projected onto. Walt Disney Imagineering has been working on this for a long time.”

Fast Forward to the present and Disneyland’s 60th Anniversary Celebration. The creative team took 18 months to develop a fully immersive outdoor show called “Disneyland Forever”. Davis says, “We wanted to tell the story of what Disneyland was about. We projection mapped on the castle with super high accuracy.” But because of the way Disneyland is laid out, not every guest can see it during the fireworks show, so he tells us that they projection map onto “It’s a Small World” and even the 80 ft high Matterhorn. Davis continues, “We projection mapped the entirety of Main Street. Each block is a 4K shot, so literally Main Street is a 16K video image.”

Erik Koehler is the Senior Video Designer for Creative Entertainment at Walt Disney Parks and Resorts. He gives us the technical specs on the hardware: “Those are all separate systems and we tried to keep all the pixel densities similar across all the surfaces. It requires three totally different systems with totally different lenses to achieve that.” Koehler tells us that all of the projectors are by Christie. They chose the Boxer 4K30 for the Matterhorn. There are four Roadster HD20K-J's to cover the castle. Main Street is longer but the throw is shorter so they use 14 projectors.

Both men say they the key to the process is the Hippotizer from Green Hippo). This is the processor that seams the images together and software that allows for the creation of 2D images laid over large 3D objects.

Chuck Davis says that there are three ways to think about the process, “We can just project on the object like it's a flat screen. We put textures and things on there. Second, using the Hippo itself to do shrink wrap, we can take a 2D image, project it onto the model detail and then we can start moving it around.”

Additionally, he says they can add barriers within the animation to make objects appear to follow the building’s exterior. “There's a scene in the show where balloons start popping up. They are flying in the air and they bounce off the contours. They bounce off a ramp, bounce off the veranda and one hits a little bit of the turret and then flies off into the air.” Davis continues, “The third thing we can do, that people are most amazed by, is that we can animate in 3D on a 3D and it looks like the building is doing something that it can't do. It looks like it's getting squashed or blown up or flipping over or doing crazy things. We play with your eye and trick you into believing that these crazy things are happening.”

Erik Koehler designs the systems and he says that the greatest limitation they face is the size of the images and the speed of their processors, “The size of that file is the tricky part. You can't go too big because then it becomes too burdensome on the video server to playback live.”

Look East to the Future

Davis and Koehler say that what we’ve seen at Disneyland is just the beginning. Their team is working on 4K resolution they are moving that way very rapidly. Chuck Davis says, “We're opening a new park in Shanghai. It features the largest castle ever built. We’re working on a show that will have 18 4K projectors. It’s the largest canvas that we've ever projected on in terms of pixels. Green Hippo has never done anything this large and they are the king of the industry.”

Jeff Chaves was trained in video production in the Army and has been involved in the industry for more than 27 years. He and his wife run Grace Pictures Inc.