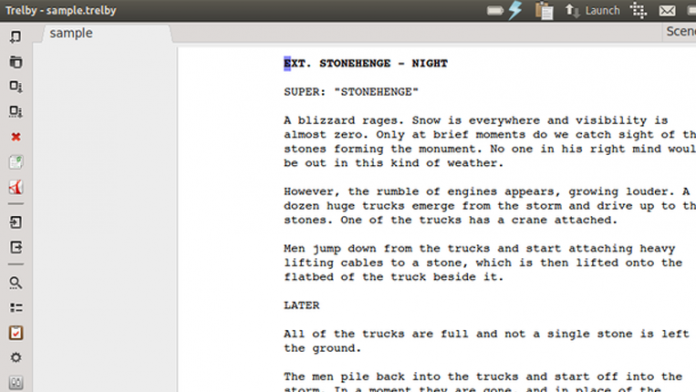 None of the programs that we investigated will get you laughed out of a producer’s office for non-compliance with the “Hollywood standard” formatting.

The first question is, “How much do you want to spend?” With most things in life, you get what you pay for, but there are great programs out there for as little as FREE! Frankly, most programs won’t set you back a lot of money, so you have a lot of low-budget choices. If you want the very best featured-filled scriptwriting programs, you have two choices at $250, but there are other, less-expensive options available.

None of the programs that we investigated will get you laughed out of a producer’s office for non-compliance with the “Hollywood standard” formatting. This is because all of these software makers know that you’re never going to sell a script if the formatting is unusual. They’ve all been written by screenwriters themselves and they know that producers, agents and all the “Hollywood types” are sticklers when it comes to formatting. If you send a script that doesn’t begin with a slugline (scene heading), the reader won’t get to the second line before writing “PASS” in big red letters across the front.

When considering a software package for scriptwriting, these are the features that you should probably think about:

You can get several basic scriptwriting software programs for free. By “basic,” we mean that they will come with everything you need to write a script and print it, but will usually try to sell you the extra features, such as integration into other programs and collaboration. If you are just starting out and have no immediate plans to collaborate with any other writers, producers, directors, etc. then you should probably start right here.

There are three great choices for free software. The most popular free program is Celtx, which has been around the longest. The other two are Adobe Story, which has the advantage of being backed by Adobe, and Trelby.

Trelby came out in 2011, having arisen from the ashes of an earlier program called Blyte. By early 2012 they made several upgrades, then suddenly stopped. Since they haven’t blogged since then, nor updated any of their social media since April, 2013, they are probably no longer in business. What this means for you is that there is no support whatsoever, but you can still download the free software and install it. The interface is smooth and simple. If you know anything at all about screenplay software, you won’t get lost. It is the simplest program around. It has neither bells nor whistles — not even a harmonica — but if you are looking for a free software that is simple and clutter-free, this program works wonderfully. Also, it’s open source, so if you know how to code, you’re able to customize it yourself!

Celtx has a very basic free download. Just like Trelby, it is great for those who aren’t making a living at screenwriting, don’t need to collaborate and aren’t yet ready to make Hollywood blockbusters. Celtx has been making improvements to its free software for years and upgrades the feature regularly.

Probably the biggest detriment to using Celtx is that it’s ad-supported and for those of us who can’t deal with distractions while typing, that can be extremely annoying. However, it boasts of three million users, so it can’t be too bad! One of the best features of Celtx, as well as the free version of Adobe Story is that once you’re ready to write that blockbuster, or a producer options your teleplay, moving up to the paid version will be a lot simpler than if you were using Trelby. One important note about Celtx, however, is that if you need to change over to Final Draft, it’s not a simple process to plug your screenplays into the new software, as Celtx is the only product in this review that’s incompatible with Final Draft.

And that brings us to Adobe Story. If you’re using Adobe Production Premium CC, this would be the best place for you to start. Like we said about Celtx, the move from free version to paid is straightforward. Moreover, as with “All Things Adobe,” there are boatloads of easy-to-follow video tutorials.

The subscription version, Adobe Story Plus, which costs $9.99/month, easily integrates into Premier Pro and After Effects, giving you a fairly familiar user interface (UI). Although Adobe Story is a very basic screenwriting-only program, you’ll be able to fully integrate Adobe Story Plus with Premier Pro and After Effects. Matched with Adobe’s famously wonderful-but-time-consuming customer support, you will never get stranded.

Now we present to you the pay software. For decades, the industry’s standard bearer has been Final Draft. With that title, however, comes a big price. The good news is that at $249.95, Final Draft costs less than three years’ worth of a subscription to Adobe Story Plus; the bad news is that you have to shell that out all at once. They do sell updates, but they only come out every couple of years and retail for $99.00. The bottom line is this: if you’re very serious about a screenwriting career and if you’re at the point where you’ll be collaborating with producers, you may very well need Final Draft. If you need to collaborate with professional producers, directors or other writers, you’ll most likely be working with this software. It’s a great program and very intuitive with its formatting. Currently FD isn’t available for mobile platforms, although you can now purchase Final Draft Writer to work on iPhone or iPad (not Android). Its regular price is $29.99. As with all FD products, this goes on sale, too!

Another very expensive product that you can get on sale if you’re patient is the #2 software for scriptwriting, Movie Magic Screenwriter. For the same $249.95, it has many of the same features as Final Draft, but like Celtx, won’t interchange with Final Draft, which is probably its biggest deterrent. Otherwise, they’re practically identical from a UI standpoint. One advantage that it has over the competition is that Movie Magic makes other software packages, such as budgeting and scheduling software, that integrate directly with Screenwriter. To get these features for Final Draft, you will have to purchase them from third-party suppliers and you run the risk of less-than-perfect compatibility.

Fade In Pro is the last product that we will look at, but at $49.95 it may be the best bang for your scriptwriting buck! There has been a lot of chatter around the industry of late about this product. And why not? After all, this relative newcomer performs almost as well as the Final Draft and Movie Magic Screenwriter for one-fifth the price. Plus, its updates are free. Currently, there is one huge constraint to this product, for those who may need it. There is no way for you to collaborate with other writers when writing a screenplay on Fade In Pro. So if you don’t have any intention of having to collaborate with someone else on a script, then you may just want to save yourself a couple hundred bucks and get Fade In Pro. Also, if you’re running Linux, you almost certainly want this one, as Final Draft and Movie Magic Screenwriter don’t support Linux.

Aside from screenwriting software, there are many other programs to assist writers in:

Many of them integrate with Final Draft and other scriptwriting software, and Videomaker will continue to keep you up-to-date on these, as well!

The accompanying chart doesn’t include Trelby because, as we said earlier, it is very basic and it would be mostly “no” in each row. There is no support, collaboration, bells, whistles, harmonicas, upgrades…