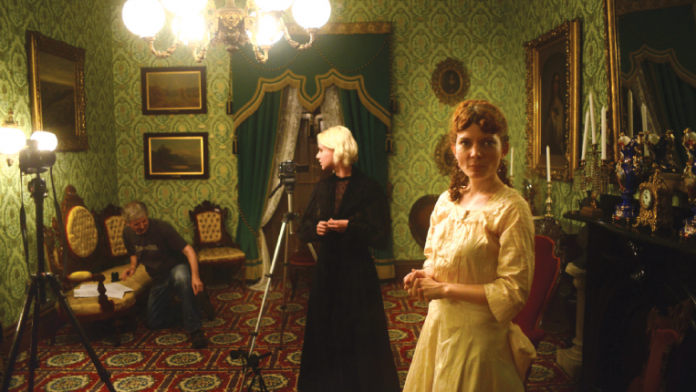 Coverage is just film or video of whatever your action is. You can have a lot of coverage, like a red carpet movie opening, filmed by five network TV crews, 150 paparazzi and 500 iPhones, or you can have very little coverage, like the single 8mm film camera that captured the assassination of John F. Kennedy.

Coverage is footage that gives you choices in the editing room, like camera angles, and the ability to control the pace of the action by changing the timing in which events happen — think of a Hollywood explosion filmed from multiple angles, shown over and over to make a longer sequence, or a long graduation speech cut down to two minutes where the edits are covered by switching camera angles — and it is one of those things, like a life jacket or fire insurance, that is most important when you realize that you don't have it.

Coverage is footage that gives you choices in the editing room, like camera angles, and the ability to control the pace of the action by changing the timing in which events happen…


In 2013 I directed a period piece based on a Henrik Ibsen play – we shot very quickly over two days and things looked wonderful, beautiful sets, costumes, acting — but as we were carting all the equipment out to the vans at the end there was something nagging me. Something I thought we missed. I looked at the shot list, everything was checked off. Two days later, Brian, the cinematographer and editor, called me.

I raced over and looked at the footage. Four characters talk in the living room, two leave, then another comes in to menace the remaining character. All three of these people did leave the room, but I didn't have coverage of it, so one of them just vanishes when the new character enters. It's really confusing. Brian and I looked at every take, hoping for something, some footage in any condition — out of focus, corner of the frame, flubbed line, anything that could show that Mrs. Linde walks out of the room before Krogstad comes in. But there was nothing. Watching the footage, you think “why is he acting like that, there's still Mrs. Linde in the room?” I had painted myself into a corner.

Perhaps this could be our coverage.

It involved re-imagining the scene, but in the final edit two characters leave the room, we cut to Krogstad loitering in the kitchen, with the audio of people saying goodbye still in the background, Krogstad walks out of the kitchen and then into the drawing room — the extra coverage — the shot of Krogstad in the kitchen, gives Mrs. Linde time to slip out of the drawing room in the minds of the audience, so when Krogstad enters, we can believe that the room is empty.

I'd chanced into my coverage by dumb luck and it's a mistake I won't make again.

Let's look at some ways to plan for getting proper coverage so that this doesn't happen to you.

Pre-plan your coverage but be willing to improvise.

Before you get on location, think of the types of shots you'll need, what angles you'll want to have and even what times of day. If you're shooting exteriors of a house, you may want footage of a house in daylight, at night time, at sunrise or sunset, you may want a wide shot showing where the house is, you may also want closeups of certain parts of the house. Is the paint peeling? Is the lawn unkempt? Doe this help tell the story of who your characters are?

One thing to remember is that it's easier to get your footage while you're there than to go back and get it later, so shoot as much as you can. This is a lesson I learned in 2013 when directing a book trailer. As we were packing up to move to the next location, the videographer was off in the woods taking video of leaves he'd found swirling around in a stream, I was annoyed that he was keeping us from getting to the next filming location, but those leaves which I'd never planned on ended up as the first shot in the trailer.

Way back in Ye Olden Days cameras were extremely expensive and sometimes, often even, people shot with one. If they wanted a different angle, they did the scene again. Today, video cameras are comparatively inexpensive. It's not nearly as difficult as it once was to shoot with three cameras, even if some are simply locked down on tripods. Shooting with multiple cameras also reduces your chances of having continuity errors which can crop up if you're cutting between different takes.

One of the great advantages of video is that small cameras with long record times can be set up without an operator, whether mounted to the hood of a car barreling off of a bridge, or used for wide coverage.

B-roll is extra footage of things that aren’t the main attraction. In a wedding it might be closeups of flowers, reaction shots of people in the audience, footage of the building. In a scripted show, it might include establishing shots, sunrises, sunsets, people walking past, action not involving the main characters — someone riding by on a bicycle, someone eating ice cream. B-roll gives you options in the editing room by allowing you to cut away from the main action and cover up edits in the main action. While you’re waiting for the action to happen, whether in a scripted or unscripted situation, ask yourself, “Could I be shooting b-roll right now?”

Shooting in a higher resolution may give you unexpected advantages.

In 2014, director Justin Benson talked to Videomaker about 4K camera technology and how it was helping solve problems of coverage for people producing movies in lower resolutions.

“People do have all the technology they could ever need to make a polished film on the cheap,” he said, “It is preferable to shoot 4k specifically in the low budget world because the ability to punch in and crop can save you when you don't have the money/time for a ton of coverage. I pull that trick quite a bit because our singles are usually pretty dirty, with the opposite actor very much in the foreground. Without the ability to punch in and crop we'd often be in trouble simply due to continuity issues.” Since that interview, Justin's latest film, “Spring” has become one of the most popular indie horror movies of 2015.

What about unscripted productions?

While getting coverage for scripted video is mostly a matter of pre-planning, many productions don't start out with a script.

“The difference between scripted and unscripted are two different conversations,” says Michael Chaskes, a supervising editor working on reality television in Los Angeles, “When you're doing a scripted show, you shoot what the director tells you.” In unscripted television, which includes, weddings, birthday parties, and documentaries, you need to anticipate what the editor is going to want. There are some obvious things and some not so obvious ones, getting them often falls on the camera operator. “For example,” he says, “if people are having a conversation about the wishing well in the back yard, and they're pointing at the wishing well and saying Oh, the wishing well! – you had better come back with useable footage of that wishing well. And by useable footage I mean 10 seconds where the camera isn't bouncing around. Sometimes people think they’ve gotten an adequate insert but they really haven’t; they'll hear someone say Oh, the wishing well! so they'll zoom out really quickly so you can see the wishing well and then zoom back in really quickly thinking they have it covered but what you have is six or seven useable frames.”

“One thing that's really important to do,” says Chaskes, thinking back about footage he's been desperate for, “is at some point, get the widest shot of everybody sitting in the room that you can.” Shots where you can’t see people’s mouths moving can be used to cover up camera moves, shots over people's shoulders can be used to cover un-synched dialogue – if the camera was repositioning while Betty was saying "Oh! The wishing well!" and there's no useable footage, you can show someone listening to her and play the dialogue over the back of Betty's head with no one being the wiser.

You may remember the 1987 movie “Broadcast News” where a pivotal plot point revolves around a reaction shot of news anchor Tom Grunick (played by William Hurt) which was recorded after the interview. Chaskes says he can’t recall seeing that done very often and certainly not recently. “It's not standard practice on any shows I've worked on. You shouldn’t even need to do that if you are shooting multi-cam, and nearly all reality shows are shot multi-cam these days."

If you are shooting on your own with a single camera, it can be important to get reaction shots after the fact — some footage of your interviewer nodding and listening shot over the shoulder of the subject can give you latitude in editing a long rambling statement into something more succinct without jump cuts.

To come back with the right footage, videographers have to pay attention to the action, Chaskes says, “Sometimes a person will be talking and you see that they're about to have an emotional moment – a camera operator who's paying attention will get in close on that moment and give the editor what they need. But other times, if they're not paying attention, they may think Now's a good time to reframe for a better shot, and they're moving and zooming for the next 30 seconds when you really needed a closeup.

“Wanting more footage is the perpetual state of existence for an editor,” Chaskes says. Knowing what you need beforehand will make it a lot easier to avoid a panic like mine in the editing room.